In 1966, the word went forth from Stockholm that Shmuel Yosef Agnon was to receive the Nobel Prize in Literature, the first Israeli to be so honored. Journalists, and the Swedish Consul, excitedly assembled at Agnon’s home in Jerusalem to mark the moment. According to the New York Times, Agnon has an unusual reason for feeling “special pleasure” at the prospect of receiving the prestigious prize from the hands of the Swedish king. The Talmud, he explained, prescribes that a specific blessing be pronounced in the presence of a monarch. “There is a special benediction one says before a king, and I have never met a king,” he reflected. The closest he had come was “once when the Emperor Franz Joseph was being visited by kings [and] I was splattered by mud when the carriages went by.”

It was an odd comment, unless one understood how important the texts and liturgy of halachic life were for this Orthodox Jewish writer. In his Nobel address, Agnon, true to his word, began by pronouncing the obligatory blessing, and then he spoke about what rabbinic writings meant to him. “Who,” Agnon asked, “were my mentors in poetry and literature?”

First and foremost, there are the Sacred Scriptures, from which I learned how to combine letters. Then there are the Mishna and the Talmud and the Midrashim and Rashi’s commentary on the Torah. After these come the Poskim—the later explicators of Talmudic Law—and our sacred poets and the medieval sages, led by our Master Rabbi Moses, son of Maimon, known as Maimonides, of blessed memory.

It was because of the loves and longing of his Orthodox childhood, Agnon explained, that modern Israel meant so much to him: “I was born in one of the cities of the Exile. But always I regarded myself as one who was born in Jerusalem.” The address is one of the great speeches in the history of Zionism—but its power derives precisely from the fact that it joins the texts and traditions of Judaism with the miracle that is modern Israel.

This aspect of Agnon’s art was appreciated by his contemporaries, but it was also believed to be unrepresentative of Israel’s cultural future. “As an artist,” Gershom Scholem reflected in Commentary in 1967, “Agnon is unequaled, a classical master; but, because of the circumstances of his time and his position, he is also the last of his line.” Because Agnon’s writing was so profoundly affected by the belief in the normative nature of scripture and rabbinic texts, Scholem believed, his approach was outmoded. “Today’s writers,” Scholem continued, “for whom the Bible is no longer a holy book but a national saga, and to whom rabbinical and medieval literature is virtually unknown, are in a happier situation than Agnon and his contemporaries. They are free to wrestle with the words in a completely new emotional setting and on a level of freedom previously unattainable.” For Scholem, Agnon’s anchoring of his literature in rabbinic texts was an artistic approach that would not be seen again.

Scholem were wrong. Today, one of the most interesting cultural phenomena in Israel is that of Orthodox Jews—in both the national-religious and Haredi communities—engaging in artistic endeavors that are fueled by their study of Talmud texts and their experience of rigorous Judaic observance. A half century after Agnon’s Nobel address, Haim Sabato published Adjusting Sights, a novel drawn on his own experiences in the Yom Kippur War. The book was received with much acclaim in Israeli cultural circles, and to this day, because of the power with which Sabato brings war to life, the novel is used by the IDF for soldiers suffering from trauma. But Sabato’s résumé is unusual for a novelist; he leads a yeshiva in Ma’aleh Adumim, where he teaches Talmud and Jewish law, and his own intimacy with rabbinic texts pervades the pages of his story. In one powerful passage, Sabato ponders the transformation his autobiographical protagonist has experienced from Talmud student to soldier whose only duty is to focus on killing. Maimonides had codified the rabbinic ruling that soldiers are forbidden to fear when entering battle. Preparing for war, he realized how unrealistic this seemed. Then, rethinking “Maimonides’ always impeccable language,” he understands that the rabbis meant to forbid a moral fear of engaging in violence: “It is this that the Torah forbids. And the truth is that as soon as we were in combat, we thought only of destroying the enemies’ tanks.”

Paragraphs such as these show that the power in Sabato’s prose comes not despite his faith, but because of it, and his faith is made more sophisticated through his artistic expression. In the war, Sabato reflected in an interview, “a wondrous thing happened to us. The innocent religious belief of youth, which the sights and sounds of the Yom Kippur War lacerated so brutally, and filled with questions, did not shatter. True, it changed. It is filled with pain and sadness, but it’s more mature, deeper—and intact.”

This Orthodox Israeli creativity is not limited to literature. The filmmaker Rama Burshtein, who grew up a secular Israeli but ultimately embraced Haredi Judaism, wrote and directed a Hasidic romance titled Fill the Void. The movie is one of the best ever produced in Israel, and is one of most sophisticated films exploring religious themes in recent history. The characters in Fill the Void are rigorously Orthodox, and the film unapologetically embraces the notion that marriage is about not only love but also family obligation and perpetuation—and that a shared commitment to these values can make love itself deeper. Burshtein reveals herself to be a sort of Orthodox Austen, giving us an account of human relationships that radiantly reveals universal human themes in this Haredi story.

The popular TV show Shtisel, focusing on the life of a Haredi portraitist, is based in part, on an actual artist in Jerusalem; and Bezalel, Israel’s most prestigious art academy, has a program specifically for Orthodox students. There has been much discussion of how Israel’s television shows have served to inspire others around the world. But even more interesting is what is happening in Israeli culture Jewishly—and how a form of Jewish art is emerging that is fully nurtured by a reverence for Judaism itself.

In 1899, the father of modern Hebrew poetry, Haim Nahman Bialik, composed an elegy for the yeshiva world that he had abandoned. The epic poem, titled Hamatmid (“The Diligent Student”), beautifully evokes the experience of rabbinical students. But many of its stanzas are soaked with cynicism, bemoaning the amount of Jewish intellectual energy expended on Talmud study: “Lord of the world! I cry within myself, / On what were all these lives, these powers spent?” His concluding lines about his former seatmates in the study hall would come to embody how many of Zionism’s secular leaders saw the world of diaspora Orthodoxy:

How pitiful and bitter is your end!

Oh, woe is me for you, my hapless folk.

How parched the lot, and blasted how the portion,

Wherein such grain could moulder and decay!

For Bialik, the world of the yeshiva was the past, Hebrew writing the future, and the two realms would not meet again.

He too was wrong. Modern Hebrew writing, which Bialik helped bring into being, is now a medium for the expression of those moored to the rabbinic way of life, part of an explosion of Orthodox artistic expression that many of Zionism’s secular leaders could never have imagined. 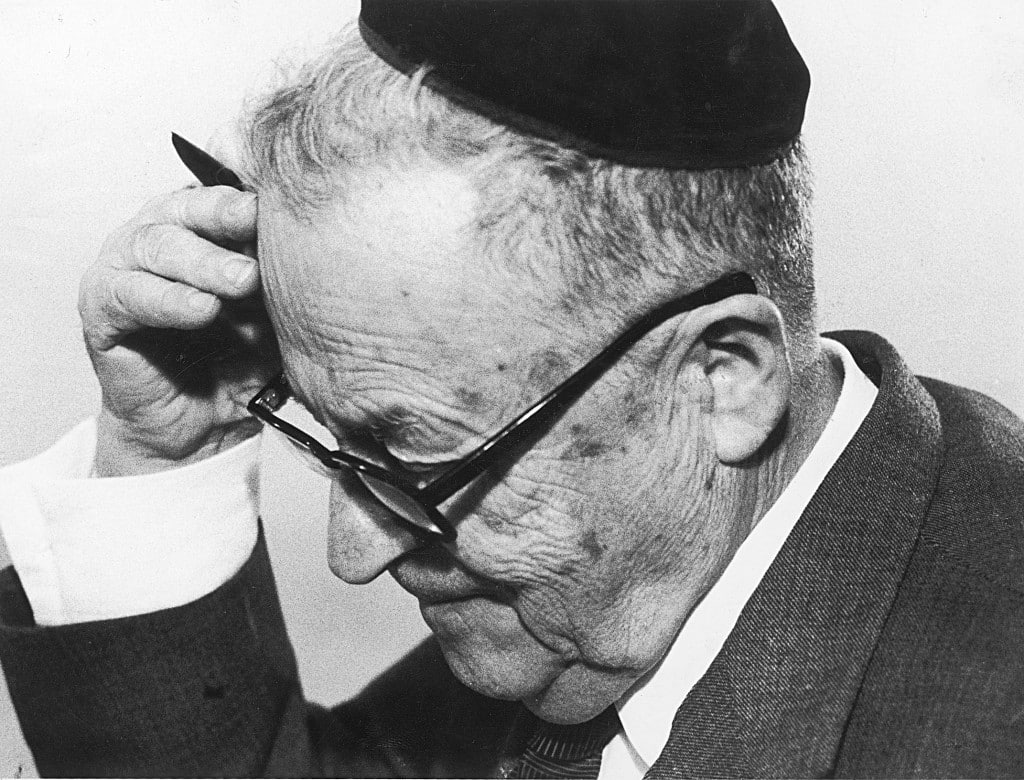