The biblical Book of Esther and Shakespeare’s The Merchant of Venice are opposites. One describes the Jewish triumph over anti-Semitism, the other the anti-Semite’s triumph over the Jew. Yet there are similarities between the two tales. Both emphasize inversions, a turning of the tables, through a woman’s disguising of identity. In the Bible, the king of Persia rids himself of his wife in a fit of rage, which sets the stage for a Jewish woman named Esther to become his queen. She, in turn, under the advice of her cousin Mordecai, keeps her true origin a secret: “Esther would not reveal her people or her birth.” Haman, who hates Mordecai, convinces the King to issue a decree demanding the genocide of the Jews. Esther, at an opportune moment, reveals her Jewishness to the king, and Haman is hanged.

The Merchant of Venice also centers on a heroine, Portia, who disguises herself. Shylock the Jew lends money to the Christian Antonio, who has never made his anti-Semitism a secret. Shylock therefore stresses that if the loan cannot be repaid, he will be entitled to take a pound of Antonio’s flesh. When Antonio’s ships, the source of his funds, are lost at sea, Shylock takes him to court.

Portia, in love with Antonio’s friend, dons the garb of a male lawyer. She debates with Shylock on his insistence that the letter of the law be followed. When he refuses to relent, she utilizes the very same law against him: Shylock must indeed take a pound of Antonio’s flesh, but their contract does not allow Shylock to spill a drop of Antonio’s blood. Portia has cornered Shylock: His insistence on enforcing the deal means he will have to give up his wealth and be condemned for conspiring against a Christian. The only way for him to avoid these dual fates is to convert to Christianity to save himself.

Both Merchant and Esther are thus tales of identity, and each features an astonishing line about Jewish identity itself. In Esther, the extraordinary phrase appears toward the beginning of the book: “There was a Jew, in the capital of Shushan, and his name was Mordecai.” The modern reader breezes past these words, but the ancient one would have known how shocking they are. For Mordecai was not a Jewish name, nor was Esther. Each is derived from the appellation of a Babylonian god—Esther comes from “Ishtar,” and Mordecai from “Marduk.”

These names are a sign of the acculturation of the Jews of Persia. Jackie Mason, in a routine mocking American Jews for “trying to out-Gentile the Gentiles” in their choice of names, describes how he once met a Jew named “Crucifix Finkelstein. This is amusing, but the phrase Mordechai HaYehudi, Mordecai the Jew, is meant to be similarly contradictory, a pagan version of Crucifix Finkelstein.

The very name demands that we ask: What is Mordecai’s true identity? What is Esther’s? Being forced to answer this question openly sets the stage for Esther to embrace her true self and to plead for her people: “If I have found favor in thy sight, O king, and if it please the king, let my life be given me at my petition, and my people at my request: For we are sold, I and my people, to be destroyed, to be slain, and to perish.” Esther and Mordecai thus emerge as embodiments of the endurance of Jewish identity and solidarity.

Merchant makes the opposite point, in a shocking sentence that is also about Jewish identity. Portia enters the courtroom, disguised as the legal expert, and utters her opening line in her central scene: “Which is the merchant here, and which the Jew?”

Of course, the audience knew well who the Jew on the stage was. Harvard’s Marjorie Garber says Shakespeare here is noting the similarities of Shylock and Antonio, since both are motivated by pecuniary concerns. Perhaps. But for the anti-Semitic society for whom Merchant was composed, there is another, more obvious explanation: that ideally, there ought to be no Jew at all. Portia’s entire speech in court, one of the most famous in English literature, contrasts justice with mercy and thereby Judaism and Christianity. Shylock the Jew is asked by a woman disguised as a man to be “gentle,” to ignore the letter of the law, and to pay no attention to his “bond.” This is an obvious reference to St. Paul’s description of Christianity replacing the Torah:

But before faith came, we were kept under the law, shut up unto the faith which should afterwards be revealed. …But after that faith is come, we are no longer under a schoolmaster. …There is neither Jew nor Greek, there is neither bond nor free, there is neither male nor female: for ye are all one in Christ Jesus.

In the end of the play, this “ideal” is realized. Portia—momentarily neither “male nor female”—brings about a result where the bond is dissolved and Shylock is forced to convert. There is no longer a bond, and there is no longer a Jew. All are one in Christianity. Christian mercy has triumphed over the Jewish letter of the law, resulting in Shakespeare’s “happy” ending: the evisceration of Jewish identity itself.

This plot is, of course a calumny, and a horribly influential one. “Invested with Shakespearean power and, in time, with Shakespearean prestige,” John Gross once wrote, “Shylock the Jewish villain became part of world mythology. He may not have added anything to existing stereotypes, but as the most famous Jewish character in literature he helped to spread them and to keep them vigorously alive. He belongs, inescapably, to the history of anti-Semitism.”

We should think of Shylock as we celebrate Purim, the holiday of the Book of Esther. Though marked by levity, Purim is deadly serious: We are reminded that Haman exists in every generation and that we Jews dare not ignore our own identity. Strikingly, it was in the Venice of Shakespeare’s time that history records some of the earliest instances of Jews wearing costumes to commemorate Purim. To this day, you will find Jewish children dressed as Gentiles, taking the trappings of another identity but still reading the Book of Esther in Hebrew in the synagogue and distributing Purim gifts to their co-religionists. It is often said that the reason Jews costume themselves on Purim is to remember Esther’s initial hiding of her own identity. The truth is very nearly the opposite. We wear costumes not to disguise our identity, but rather to emphasize that no superficial sartorial selection can alter our identity—for ultimately, the central defining aspect of ourselves will shine through. On Purim, Jews don costumes and ask Portia’s question: Who is the Merchant, and who is the Jew? To this we give a ready answer, as Esther once did: Jews we are, and Jews we still remain.

In 2011, London’s Globe Theatre invited acting troupes from 67 countries to come and perform a Shakespearean play in their respective tongues. Israel’s HaBima actors chose The Merchant of Venice. The costumes were Shakespearean, the actors Jews. A play written in Elizabethan English was performed in modern Hebrew, a spoken language resurrected in a miraculous Jewish state. Meanwhile, leading British actors and directors publicly demanded the boycott of the Israeli troupe, even as plays were performed by representatives of despotic tyrannies with nary a murmur from the English cultural elite.

The legacy of Shylock endures; the history of anti-Semitism continues. But much to the consternation of the anti-Semite, Jewish identity lives as well. 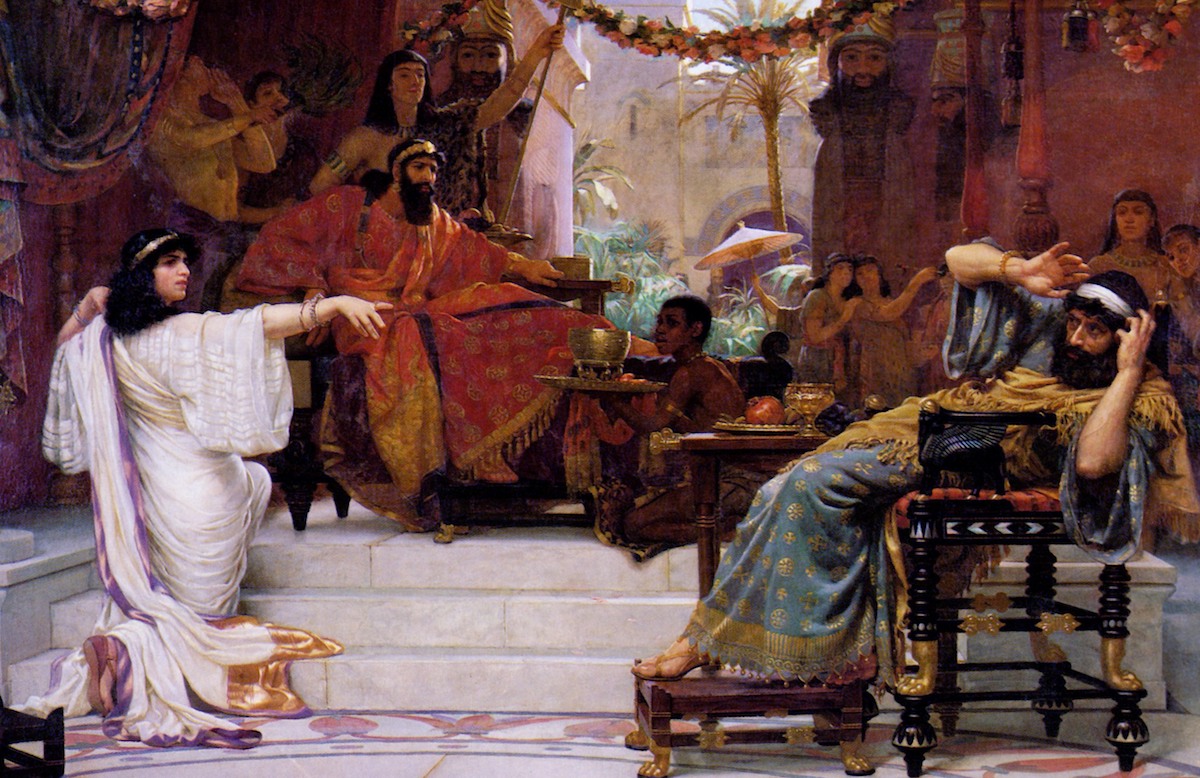