It was a video that went viral in the Orthodox Jewish world. Levi Duchman, a young Chabad rabbi ministering to the growing Jewish community in the United Arab Emirates, was married to Leah Hadad in the middle of September, one week before Rosh Hashanah. The ritual was traditional, and Hasidic, and centered, like all Jewish weddings, around a chuppah, a wedding canopy. But the occasion was, from a historical perspective, extraordinary: It was held in Abu Dhabi, the 1,500-person guest list made up of both Jews and Arabs, including Emirati royalty, with rabbis arriving from Israel, America, and Morocco. It was the largest Jewish event ever held in the Gulf Region.

One video captures a moment after the chuppah ceremony: the dancing with the groom in which all engage. As Jewish music is played and sung, we see Rabbi Duchman, a Hasid clad in kapote and black hat, dancing in the center of the circle with an Emirati Arab guest, wrapped in his own traditional white thobe and headdress, with similarly clad Hasidim and Arabs surrounding them, holding hands and revolving to the rhythm, the white robes and black frocks blending together, creating a moving mosaic of friendship and faith. When the video was first sent to me, I stared at it. Had I seen it 10 years ago, I would have assumed that it was a scene from a movie comedy, so incongruous did the pairings seem. Yet the video is real, the scene is real, the warmth and the joy of all those dancing together are real. And the date for the wedding was deliberately chosen by bride and groom: September 15, the second anniversary of the signing of the Abraham Accords.

It is a fitting testimony to all that has been achieved since the Accords were first signed: a wedding marked by the one Diaspora Jewish community on earth that, as Rabbi Duchman proudly notes, can now receive kosher Israeli goods directly by truck from the State of Israel, in a country whose relationship with the Jewish state only continues to develop.

It is striking therefore that as the wedding marked the anniversary of the historic agreement, the astounding success of the Accords still continues to be denied in publications whose own “expertise” was so challenged by the Accords themselves. We are told that the failure of the compact to address the Israeli–Palestinian conflict is a fatal flaw. “Why the Abraham Accords Fall Short,” one headline in Foreign Policy declared several months ago, with the subhead: “Sidelining the Palestinians Is a Recipe for Violence, Not Peace.”

Then, on the anniversary, another article in Foreign Policy informed its readers that “Two Years Later, the Abraham Accords Are Losing Their Luster” because their achievements “are overshadowed by the intensification of conflict with the Palestinians.”  The agreement, we are further told, “may have raised Israel’s regional profile, but that didn’t translate into a spirit of generosity with the problem closest at hand.”

The spirit of the articles hearkens back to the snarky comment made in 2020 by the Atlantic’s Jeffrey Goldberg about naming the Accords for the biblical patriarch: “My personal preference would have been to deploy the big gun himself, Abraham, the father of monotheism, for a peace treaty between Israelis and Palestinians, which would be the thing that actually ended that Middle East conflict.”

All this, of course, gets it exactly wrong. The further warming of the Emirati-Israeli relationship in the face of tensions with Palestinians—however regrettable those tensions might be—reflects the strength of the Accords, and their central insight: the fact that one localized conflict over the future of Judea and Samaria need not be “solved” in order to build bridges to the rest of the Arab world and to the Muslim world beyond. And as former Israeli Ambassador Ron Dermer has pointed out, building on what has been achieved to attain a formalized relationship with Saudi Arabia could indeed end the “Arab–Israeli conflict”—even if an accord with the Palestinians has yet to be reached.

In fact, this one Hasidic wedding in Abu Dhabi, forever binding a rabbi’s wedding anniversary to that of the Abraham Accords, embodies, in a sublimely symbolic way, why the name of the agreement is so apt. The chuppah, the canopy, is the representation of the home that the Jewish husband and wife intend to build lovingly together in the future. And yet, superficially, it’s an odd sort of home to build: no boundaries between public and private, open to the breezes on all four sides. Some explain that the structure makes sense when it is perceived as an echo of Abraham, whose desert tent, according to Talmudic tradition, had open doors on all four of its sides.

Rabbinic literature explains that the open sides symbolized the patriarch’s embrace of all those who would come upon him, while highlighting his commitment to bear the monotheistic message to the four corners of the earth.  Under the chuppah, then, standing in the metaphorical shadow of Abraham’s tent, a Jewish husband and wife likewise commit themselves to the Abrahamic mission while showing their openness to those beyond.

It is therefore difficult to think of a better symbol of the Abraham Accords than this wedding: a tent of Abraham built by a Jewish groom embracing his Abrahamic cousins, with the embrace warmly reciprocated. And it is not only strategic concerns but also the spirit of Abrahamic faith that has helped further these remarkable developments in the Gulf.

This can be seen in the sheikh chosen by Saudi Arabia to deliver the central sermon in this years Mecca hajj pilgrimage: Mohammed al-Issa, who is known for his 2020 trip to Auschwitz, the first senior Muslim cleric to journey there.

Several weeks before the sermon, I was part of a group of Jewish visitors that met with the sheikh in Saudi Arabia. In a moving and unforgettable conversation, he described the concern that led him to journey to the concentration camp, how inspired he had been by an encounter with the president and students of Yeshiva University, his adulation of the writings of Maimonides, and what Judaism and Islam have in common. If even more progress is made, it will be with the help of spiritual leaders like him.

It is impossible to predict what will happen next, and when. But awe is the only appropriate reaction to the Abraham Accords anniversary wedding in Dubai, and all that it reflects. And a bit of history will only add to the wonder. Several articles noted that while Rabbi Duchman ministers to Jews in the Emirates today, his great-grandfather lived a very different life: He had been sent by the Soviets to Siberia, imprisoned for his faith activities. It was in Siberia, following four years in the Gulag, that he was married. The ceremony  involved a makeshift wedding ring fashioned from a spoon, given by groom to bride under the chuppah.

The miraculous nature of Jewish history is suddenly and transcendently realized. Standing in Siberia, in a frozen wasteland, a Jewish couple erected a chuppah in memory of their ancestor Abraham, joining themselves to his faith and his family. They could not have imagined—though I think they would have believed—that one day their descendant would erect another wedding tent of Abraham in the Middle Eastern desert, in a place where not long ago no Jewish life existed, and would mark the moment by rejoicing with other descendants of Abraham, Arabs embracing Jews at the moment that is the very epitome of Jewish joy.

Only a truly stultified or cynical soul could resist awe at a Jewish Abu Dhabi wedding such as this. And only a student of history insufficiently humbled by what has occurred could resist wondering at all that has happened, as well as what is yet to be. 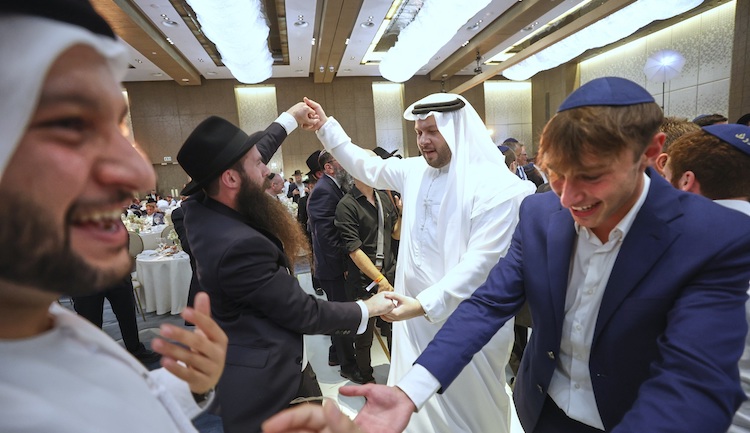 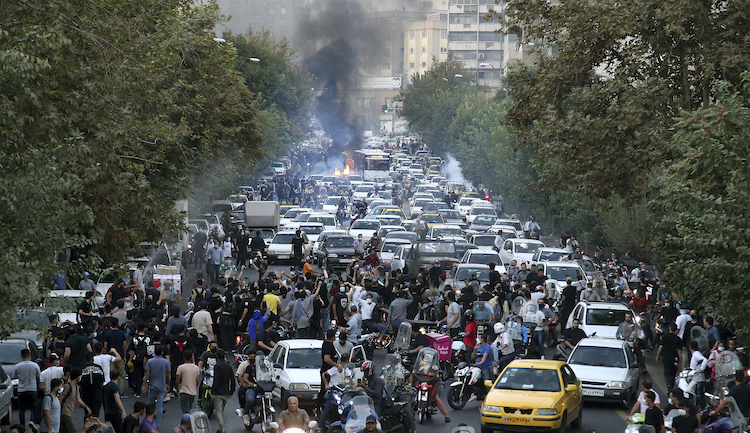