As president, Jimmy Carter considered himself uniquely destined to address the issue of Israel and the Middle East: not because of his political skill or diplomatic experience, but because of the time that he spent teaching Sunday school. “I had taught the Bible ever since I was eighteen years old,” he explained. “And exactly half of all my lessons have been from the Hebrew text, and the other half from the New Testament. So I knew history; I knew the background; and I had a strong religious motivation to try to bring peace to what I call the Holy Land.”

So reports Stuart Eizenstat in his book President Carter: The White House Years. The memoir is by a former senior White House aide who admires the administration that he served, which is why his criticisms of Carter are all the more remarkable. Eizenstat particularly targets Carter’s decision to continue to teach Sunday school after assuming office. In these classes, in the presence of reporters, Carter made public statements about the Bible that revealed, for Eisenstat, a “lack of political sensitivity [that] was sometimes breathtaking.”

Yet the tale of Carter’s Sunday-school lessons reveal more than political ineptitude. The subject of his first class was the tale of Jesus driving the moneylenders from the temple. The press soon reported that the president had informed his students that this story was “a turning point” in Christ’s life. “He had directly challenged in a fatal way the existing church, and there was no possible way for the Jewish leaders to avoid the challenge. So they decided to kill Jesus.” Anguished religious leaders involved in interfaith engagement wrote the White House to object to this simplistic gloss on a subject that has inspired persecution, and murder, of Jews for centuries.

Eizenstat reports that even after this catastrophe, Carter was not content “with avoiding further damage from this high-wire exercise.” He soon spoke at a Sunday-school class again; and, with an AP reporter in attendance, told those assembled that Jesus, in proclaiming himself the Messiah, was aware that he was risking death “as quickly as [it] could be arranged by the Jewish leaders, who were very powerful.” Eizenstat, himself apoplectic, was immediately flooded by complaints from both Christian and Jewish leaders asking him “why Carter approached the question of the Jews’ role in Jesus’s death twice.”

Eizenstat’s book allows us to understand how episodes such as these reveal how Carter’s own insensitivity to the Jewish historical experience, and his understanding of the Bible, colored his attitude toward matters pertaining to the Middle East. The president harbored a deep dislike for Menachem Begin, “with all his obduracy and legalisms,” and did not sufficiently understand the “history of oppression” in Begin’s own life. Eizenstat further writes that Carter saw American Jewish leaders and Israel “through the filter of the Bible, more the New than the Old Testament.”

Reading Eizenstat’s book, I felt enormous relief, not only that Carter was not reelected, but also that so many millions of deeply religious Christians in America feel differently about Israel and the Jewish people. Carter’s fellow Christians are no less steeped in the New Testament than he; they too have spent years in Sunday school, and they too see the Middle East “through the filter of the Bible.” To paraphrase Eizenstat, the rootedness in what they call the Old Testament is profound and abiding, and for them the New could be seen only through the filter of the Old. I have had the opportunity to meet Christians such as these all over the country. As a friend of mine, the young evangelical leader Robert Nicholson, has noted in an article in Mosaic, their support for Israel firmly rests on the Bible as the “embodiment of God’s everlasting covenant with the people Israel.”

This rootedness in Hebraic texts, Nicholson further explains, plays a key role in the way these Christians understand not only Christian texts but history itself. God, they know, promised Abraham that “I will bless those that bless thee and curse those that curse thee.” And, looking back at the Jewish people’s historic enemies, “they note that all, to a one, have met their doom.” They know as well that “the Bible predicts the destined journey of that people from catastrophic exile to miraculous return.” Israel, for these Christians, reminds them that these scriptural ideas “are not abstract concepts open to interpretation; they are living facts that entail spiritual, social, and political obligations in real time.”

At the same time, Eizenstat’s description of Carter’s Christianity, and the impact that it had on his own attitudes, should be a clarion call to all who care about the future. Carter’s story should impress on Jews the fact that American Christian support for Israel is by no means inevitable. Tens of millions of them still love and support the Jewish state, but Nicholson warns that this is not at all guaranteed to endure in the next generation. Nicholson notes that, influenced by the fashionable nature of progressive issues and by biblical criticism, many young evangelicals are predisposed to embrace the Palestinian narrative of Israeli oppression.

For Christians to remain dedicated to Israel, argues Nicholson, scriptural study is insufficient. Christians must visit the country itself: “The best education on Israel comes from visiting the land, meeting its people, and witnessing its day-to-day life, in all its complexity, firsthand.” Nicholson has gone on to found the Philos project, which is dedicated to educating Christians about the Middle East. Its Passages program brings young Christians to the Holy Land so that they can experience what it calls “the modern-day miracle that is Israel.” These future Christian leaders emerge with a deeper understanding of the richness of Israeli society, the lives of Jews, Muslims, and Christians in the Middle East, as well as a deeper understanding of how their own tale is rooted in the Jewish story.

As I read President Carter, I wondered how Carter’s career and policies might have been different if he had been able to travel to Israel, as a young Christian, with someone like my friend Rob. I have spent enough time in religious schools to know that a deep understanding of scripture and texts does not necessarily enhance political instincts, and that no amount of biblical engagement, or travel to the Holy Land, could have made him as skilled at politics as Reagan. Yet a Passages program might have done wonders for Carter. It might have made him more sensitive to the Jewish story and more aware of the miracle that is modern Israel. And if we believe—as many Jews and Christians do—that God blesses those who bless Abraham’s people, then God may have chosen to bless even someone as politically inept as Carter with continued political success. After all, both the Bible and modern Israel remind us to believe in miracles. 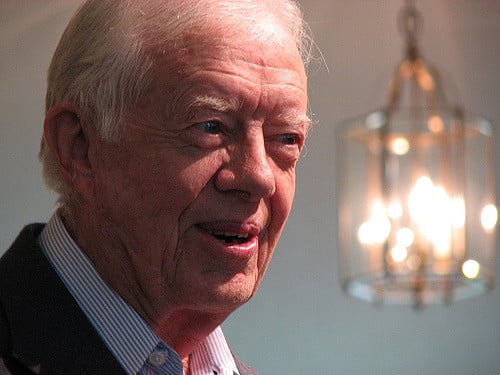