The world will doubtless mark the 75th anniversary of the Nuremberg trials, which began in November 1945, as a model of international law. For the first Nazi executed at Nuremberg, however, the trial embodied not multilateralism but rather the revenge of the Jews. This was made clear in an eerie moment 11 months later, one whose historical and theological lessons reverberate to this day.

On October 16, 1946, Julius Streicher—the Nazi’s Nazi, publisher of Der Stürmer, the man who personally ordered the destruction of the Great Synagogue of Nuremberg on Kristallnacht—was taken to be hanged. As Newsweek reported, Streicher did not die with dignity: “He had to be pushed across the floor, wild-eyed and screaming ‘Heil Hitler!’ Mounting the steps he cried out: ‘And now I go to God.’ He stared at the witnesses facing the gallows and shouted: ‘Purimfest 1946.’”

That is a reference to the Jewish holiday of Purim, which marks the tale told in the book of Esther: the rise of Haman as vizier of Persia and his attempt to wipe out the Jews. In the end, Haman himself is hanged on the gallows, and later, following a war against his allies, Haman’s 10 sons are hanged as well. In invoking Purim, Streicher drew on an anti-Semitic trope with a long German lineage. Purim, for Martin Luther, reflected the bloodthirsty nature of the Jews, as he noted in a text called On the Jews and Their Lies:

They are real liars and bloodhounds who have not only continually perverted and falsified all of Scripture with their mendacious glosses from the beginning until the present day. Their heart’s most ardent sighing and yearning and hoping is set on the day on which they can deal with us Gentiles as they did with the Gentiles in Persia at the time of Esther. Oh, how fond they are of the book of Esther, which is so beautifully attuned to their bloodthirsty, vengeful, murderous yearning and hope.

That Streicher went to his death echoing Luther’s anti-Semitism was appropriate, for he had lived his life following Luther’s advice: “First to set fire to their synagogues or schools and to bury and cover with dirt whatever will not burn, so that no man will ever again see a stone or cinder of them…I advise that their houses also be razed and destroyed.”

For Jews searching for signs of providence, the invocation of Esther is striking. Hitler was indeed a modern-day Haman, and those hanged at Nuremberg his spiritual sons. And eerily, exactly 10 of them went to the gallows; 11 were sentenced to be hanged at Nuremberg, but Hermann Goering committed suicide in his cell the night before. This link between Haman and Hitler reminds us why Jews celebrate Purim: not because we are bloodthirsty, but because the tale of Esther reminds us that evil must be fought before it is too late.

The Persia of Esther was the Germany of its day, a center of civilization that suddenly empowered a genocidal maniac. No one understood this better than Rabbi Joseph Soloveitchik, who had studied in Berlin at the height of its intellectual splendor but escaped the inferno that was yet to come. Esther, he wrote, is “the book of the vulnerability of man in general and specifically of the vulnerability of the Jew.” In the face of such vulnerability, Jews must learn from Esther and battle against our enemies; precisely in a world of such insecurity and evil, Esther’s heroism must be celebrated and the downfall of the wicked must be joyously marked. There is great wisdom in the old anecdote, supposedly originating in the 1930s, in which a Jew predicts that Hitler would ultimately die on a Jewish holiday. Asked by his friend how he has such foresight, he replies, “Because any day that Hitler dies will be a Jewish holiday.”

In fact, the day on which Julius Streicher went to his death was indeed a Jewish holiday, though it was not Purim but Sukkot, when Jews feast for seven days in ramshackle structures. In this calendrical convergence, another scriptural allusion, missed by Streicher, can be found. Every Sukkot, Jews read Ezekiel’s apocalyptic vision of “Gog and Magog.” The prophet describes an international axis of nations that sets out to destroy the Jews, whose ultimate defeat will be marked by the celebration of Sukkot.

This passage was brilliantly explained by Rabbi Samson Raphael Hirsch, rabbi of 19th-century Frankfurt. The ancient tale of the tower of Babel, he wrote, describes a pagan, tyrannical society that created an edifice in worship of its own power; it is just such nations that hate the Jews, who preach a God of morality and justice. By celebrating for seven days in what seems to be a mere shack, the sukkah, Jews signify their certainty that the ethos marked by Babel will be ultimately undone. The people who suffered most at the hands of tyranny nevertheless confidently predict that world history, which began with a totalitarian tower, will end in a holiday of huts, a defeat of evil, and a recognition of God as the true source of power and justice.

Thus a sublime symmetry emerges that the Allies could never have foreseen. It was in Nuremberg that Albert Speer had built the “Hall of Honor,” an enormous structure towering over the rally grounds where the Nazis gathered to celebrate themselves. Architecturally celebrated in Germany, the Hall had been inspired by the ancient altar of Pergamon in Greece. To watch film of the Nuremberg rallies in a pagan structure reborn is to see a prophecy pronounced by the 19th-century German-Jewish poet Heinrich Heine terrifyingly fulfilled:

The ancient stony gods will rise from the forgotten debris and rub the dust of a thousand years from their eyes….German thunder is of true Teutonic character. It is not nimble, but rumbles ponderously. Yet it will come. And when you hear a crashing such as never before has been heard in the history of the world, then you will know that the German thunderbolt has fallen….A play will be performed in Germany which will make the French Revolution look like an innocent idyll.

In the end, the Nazi Hall of Honor, like Babel’s tower of old, was undone. The most nightmarish images of Nazi rallies were filmed by Leni Riefenstahl in and around this edifice in Nuremberg. She did not film one of the most glorious images of the end of the war: when American forces dynamited the swastika that sat upon it. It is fitting then, that the destruction of the Nazi “edifice complex” was to be followed, in the very same city, by a hanging of Nazis on the holiday of huts. Streicher did indeed die on a day of Jewish celebration, and his just death on Sukkot rendered the celebration more profound.

By next October, the world will have moved on from remembering the Nuremberg trials. But some Jews, perhaps, will stand in synagogue during Sukkot in 2021, and recall it as the 75th anniversary of the ten sons of Haman meeting their Maker. We will recall how Julius Streicher died with a Jewish holiday on his lips, and we will truly celebrate “Sukkotfest 2021”: Remembering the defeat of evil that was, and anxiously yearning for the ultimate defeat of evil that is yet to be. 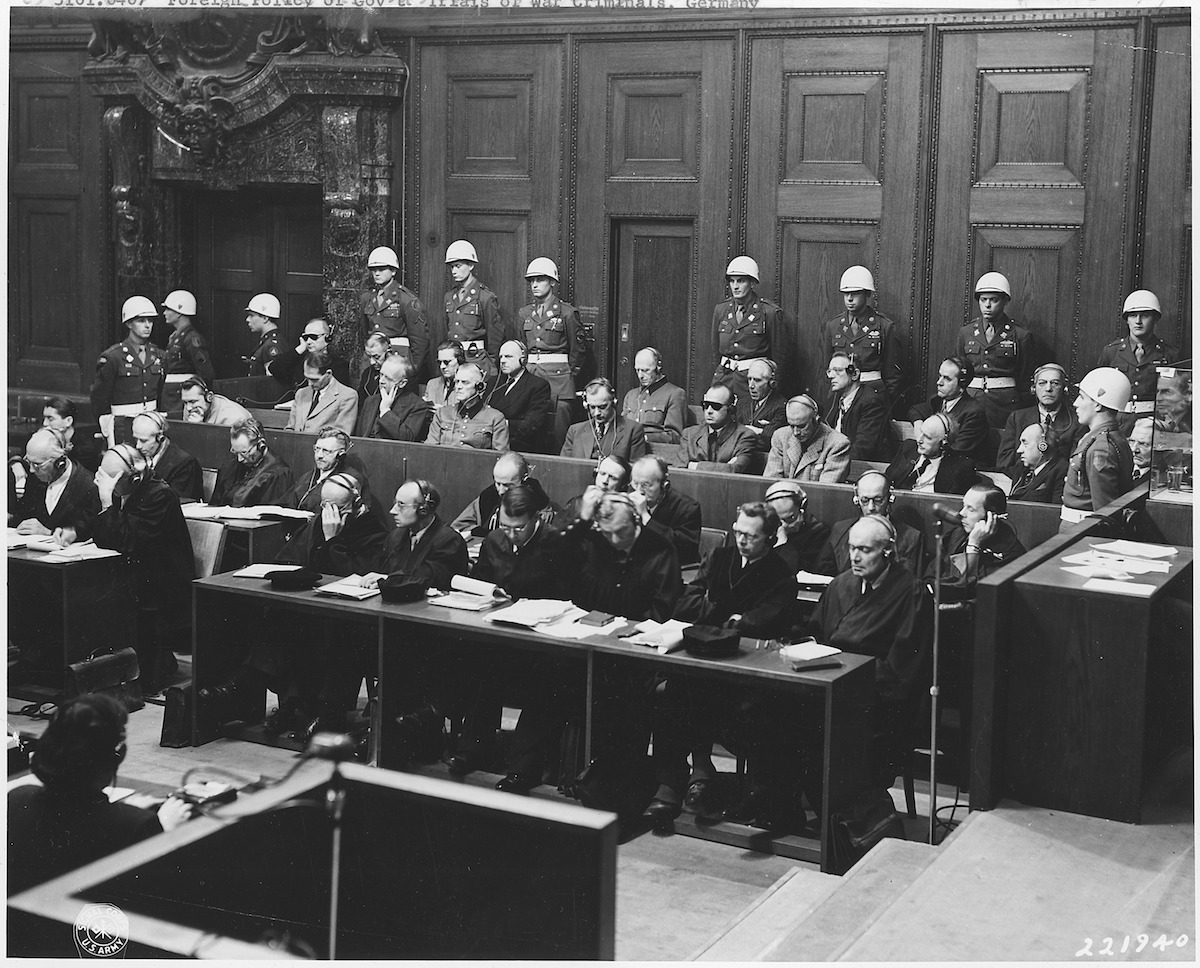