In the 19th century, a poetic debate took place about theology and history. The contestants were two literary geniuses: the man who was then the most famous poet in America, and perhaps the most famous female poet in Jewish history. The tale, even for those uninterested in verse, contains deep lessons about the Jewish past in the United States—and its future.

In 1852, Henry Wadsworth Longfellow arrived in Newport, Rhode Island, and visited the Touro synagogue, the oldest Jewish edifice in America, built by Sephardic Jews before the Revolution. In 1790, George Washington had toured the town and corresponded with Moses Seixas, leader of the Jewish community. Seixas famously described the newly established government as one that “gives to bigotry no sanction,” and Washington responded by adopting the very same phrase, forever associating Newport’s Jews with religious liberty.

Yet at the time, Judaism in Newport was dying. Seixas’s letters reveal that he was desperately struggling to maintain traditional services; he lacked anyone remotely qualified to read from the Torah, and the one shofar for the High Holidays was badly damaged. It was only two decades after Washington’s famous visit that the remaining Jews of Newport left for New York. Longfellow thus found the synagogue locked and empty.

Longfellow strolled to the Jewish cemetery and was taken with what he saw. Two years later, he published “The Jewish Cemetery in Newport.” Given Longfellow’s fame, his poem would have been read by his devotees across the country. The first stanza establishes contrasts between the liveliness of Newport and the dead Jews lying d buried before him: “How strange it seems! These Hebrews in their graves, / Close by the street of this fair seaport town, / Silent beside the never-silent waves, / rest in all this moving up and down!”

Following the tradition of their ancestors, the Jews of Newport laid some of the gravestones horizontally. The stone tablets on the ground, with Hebrew letters etched upon them, reminded Longfellow of the shattering of the covenant at the sin of the Golden Calf: “And these sepulchral stones, so old and brown, / That pave with level flags their burial-place, / Seem like the tablets of the Law, thrown down / And broken by Moses at the mountain’s base.”

Throughout the poem, Longfellow expresses sympathy for the Jews who suffered:

Pride and humiliation hand in hand
Walked with them through the world where’er they went;
Trampled and beaten were they as the sand,
And yet unshaken as the continent.

To Longfellow, the beautiful abandoned building bespoke the fossilized form of the Jewish people: “Closed are the portals of their Synagogue, / No Psalms of David now the silence break, No Rabbi reads the ancient Decalogue / In the grand dialect the Prophets spake.” He concluded with a eulogy for the people of Israel:

But ah! what once has been shall be no more!
The groaning earth in travail and in pain
Brings forth its races, but does not restore,
And the dead nations never rise again.

Fifteen years later, a young Jewish woman by the name of Emma Lazarus came on vacation to Newport. She had been raised in wealth and privilege; her family, still religiously affiliated, was not rigorously observant. Longfellow’s description of her people’s demise was well known to her. For Lazarus, this was personal. She was a descendant of the Seixas family. It was the Judaism of her predecessors that Longfellow had deemed to be dead.

Something—national indignation, family pride, or profound religious insight—welled up within her, and the teenager drafted a poem in response. Mimicking Longfellow’s meter, she chose a title that reflected a difference of emphasis: “In the Jewish Synagogue at Newport.” For Lazarus, it was the sanctuary where her predecessors had prayed that was the truly inspiring site more than their burial ground. The poem focuses on the lives they lived, rather than on their deaths.

Lazarus gives tribute to the radiance of freedom her forefathers had found in America, but she reflects on how the synagogue transported a visitor from the present to the roots of the Jewish people: “How as we gaze, in this new world of light, / Upon this relic of the days of old, / The present vanishes, and tropic bloom / And Eastern towns and temples we behold.” No one had read from the Torah in that synagogue in decades, yet standing there, in communion with her predecessors, Lazarus felt herself travel back in time back to Sinai itself: “A wondrous light upon a sky-kissed mount, / A man who reads Jehovah’s written law, / ’Midst blinding glory and effulgence rare, / Unto a people prone with reverent awe.”

Lazarus admits to a cruel irony; in the sanctuary, “The light of the ‘perpetual lamp’ is spent / That an undying radiance was to shed.” (All synagogues feature an eternal flame meant to symbolize the divine presence.) Yet she insists that even as the light in the synagogue may have ceased to be lit, the Jewish flame endures. Her conclusion is a direct response to Longfellow:

Nathless the sacred shrine is holy yet,
With its lone floors where reverent feet once trod.
Take off your shoes as by the burning bush,
Before the mystery of death and God.

Whereas Longfellow thought of the Jewish covenantal tablets shattered at Sinai, Lazarus invokes the burning bush where Moses first met the Divine at Sinai. As David Gelernter once wrote in these pages, the miracle is “not the burning but the continued burning. Those dry thorns should have burned to black dust in an instant. But time has been stretched out, stretched thin, and a moment of instantaneous combustion lasts on and on.” The Jews endure, and the fire of Sinai could still be sensed in that empty sanctuary.

This past month, I travelled with members of my congregation, New York’s Shearith Israel, to which Lazarus had belonged, to spend Shabbat at Touro synagogue in Newport. It was intensely moving to pray the same Sephardic liturgy that Seixas would have used, and to sing the tunes he would have sung. We then visited the cemetery, read both poems, and recited Kaddish, feeling intensely how the Jewish people, often deemed dead, have indeed risen again and again. At that moment, the promise of America, embodied by Washington’s visit to Newport, suddenly merged with the loyalty that Moses Seixas showed for his own faith and people.

Lazarus went on to lead a life of Jewish activism. Today she is known first and foremost for her celebration not of the burning bush, but of a different source of illumination, that of the Statue of Liberty: “I lift my lamp beside the golden door.” For many American Jews, Lazarus’s ode to America is rightly associated with our ancestors’ immigration and the blessings of freedom. At the same time, the Jewish arrival in America was to a great extent followed by abandonment of Jewish identity. Many American Jews might readily identify with the legacy of liberty associated with Newport, but less so with Seixas’s struggle to keep Judaism alive.

Rather than assimilation, our responsibility as Jews is to combine the lamp of America with the fire of Judaism. The shofar that Moses Seixas sought to sound was utilized in a relevant metaphor by Cynthia Ozick: “If we blow into the narrow end of the shofar, we will be heard far. But if we choose to be Mankind rather than Jewish and blow into the wide part, we will not be heard at all; for us, America will have been in vain.” It falls to us, in this “new world of light,” to be inspired by Lazarus’s Newport poem, to make the case for the eternal fire of Jewish identity, and to summon the loyalty to live by its luminance. 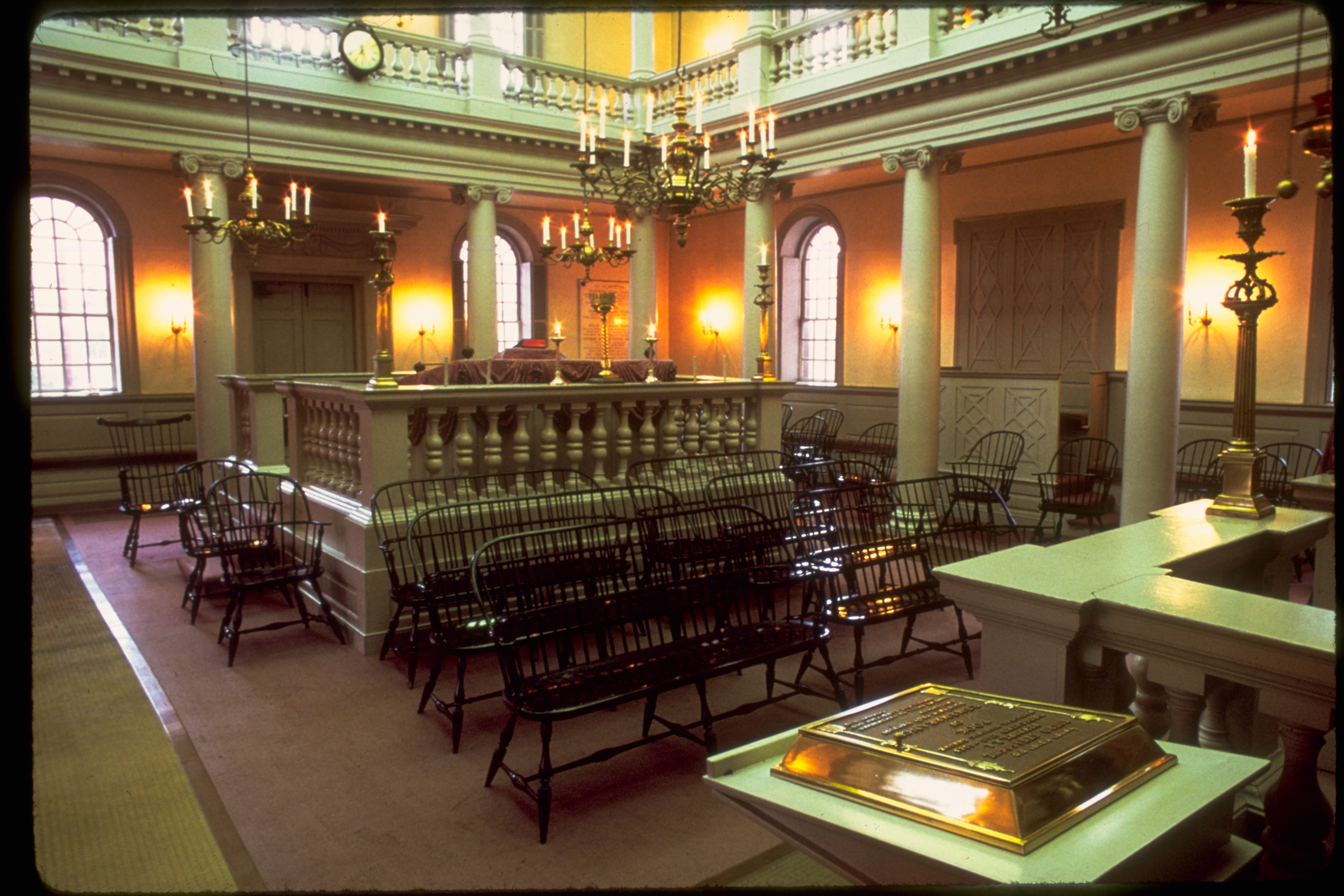