n its absolute radical abstraction—a tapered shaft, pyramidal cap, and nothing else—the Washington Monument reads like the expression of a single colossal thought. In reality, it was the unlikely product of a century of bungling, political jealousy, and sheer happenstance. Again and again it threatened to become something else entirely, at one point a cumbrous neoclassical platitude, at another an extravagant Victorian folly. Only at the last possible minute was it saved by a wily military engineer who managed to conceal his intentions in arid committee reports. He turned an ugly marble stump that had embarrassed Washington for decades into an impeccable obelisk, exactly 555 feet and 5 5/8 inches high, the largest and most sublime monument ever built to honor a military or political leader. 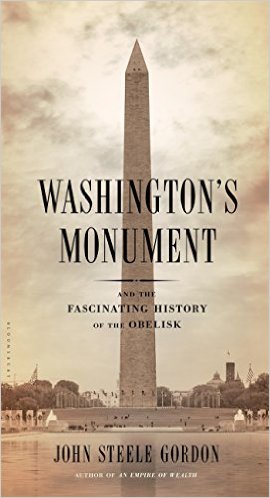 This is a story of intrinsic drama, but in Washington’s Monument, John Steele Gordon successfully interweaves it with two others—that of the ancient Egyptian origins of the obelisk and of the much later mania for moving and re-erecting obelisks for reasons of political prestige. In his telling, the Washington Monument is only the latest episode in the 4,000-year history of the obelisk. These three stories are essentially independent of one another, but Gordon artfully cuts back and forth between them. His book itself is a marvel of ingenious construction, not so much an obelisk as a fugue.

Gordon, who contributes to Commentary’s blog, is best known as author of An Empire of Wealth: the Epic History of American Economic Power. And, in fact, the history of the obelisk is nothing but the history of economic power. When nations become superpowers, of which Egypt was the first, they seem to accrue obelisks. When Egyptian power waned, its obelisks were systematically removed by Roman emperors, beginning with Augustus. He and successors pilfered more than a dozen and reinstalled them in Rome, although the last, taken by Constantine, was sent to Constantinople, soon to be the seat of the mighty Byzantine Empire. A millennium later, the popes of Renaissance Rome just as systematically moved them to face the most important Christian churches. During the 19th century, superpower status shifted from France to England to the United States, and as it did, each in turn received an obelisk from the ruler of Egypt.

Gordon reminds us that the origin of the obelisk is obscure. The Egyptians called them tekhenu, from the verb “to pierce.” We use the Greek obeliskos —which also means “to skewer,” as in shish kabob. The earliest Egyptian obelisks of which we have any evidence were typically in pairs at the entrance to a temple, an honorific usage much like the pair of columns at the Temple in Jerusalem. But presumably they had a practical function before they became purely commemorative objects. A tall freestanding upright casts a very long shadow, making it useful for siting and making calendric observations. An obelisk in Alexandria was responsible for the greatest feat of ancient Greek geography: The Greek mathematician Eratosthenes measured the angle of the shadow cast on the summer solstice, then calculated the distance to Aswan, where the sun was directly overhead, and used them to approximate the circumference of the earth (getting it correct to within 1 percent).

Today only six obelisks are still standing in Egypt. Most are elsewhere; the rest of Gordon’s book concerns their eventful afterlife. He is particularly good on the remarkably peripatetic obelisk that stands before St. Peter’s in Rome. That 84-foot stone was commissioned by a forgotten pharaoh and stood in Heliopolis; Emperor Augustus moved it to Alexandria to grace his new forum there. Not long afterwards, it was purloined by Caligula for the new circus in Rome (not our circus but an outdoor arena for chariot races). That circus would become notorious as the traditional site for Nero’s public executions of the Christians whom he blamed for burning Rome. In 1586, Pope Sixtus had it moved to St. Peter’s and lifted upright in a spectacular but suspenseful public ceremony.

In 1783, the Continental Congress authorized the building of an equestrian monument to General Washington, to be placed wherever Congress would be permanently located. But the cash-strapped federal government of the early American Republic ruled out the building of lavish public monuments. And fortunately so, for if the Washington monument had been built as originally proposed, it would have depicted Washington on horseback “in Roman dress, holding a truncheon in his right hand.”

A design that had begun life as a neoclassical Egypto-Greek confection with an overwrought sculptural frontispiece was pared down to a pure abstraction that spoke of nobility, resolve, and eternity.


The centenary of Washington’s birth in 1832 revived the dormant project, and a Washington National Monument Society was formed. Rather than waiting for the federal government to allocate funds, the society began collecting private contributions, limiting contributions to a maximum of one dollar. By 1838, it already had $30,000, enough at least to begin construction. The society placed advertisements in all the national newspapers, inviting design proposals. (Gordon might have cited one of the curious aspects of this competition: Competitors were told they were expected to work for glory alone and were promised no premium or prize if they won.)

The competition was won by Robert Mills. Mills was an architect of great dignity and integrity, but he was not a man of imagination. His civic buildings (foremost among them the Treasury, Patent Office, and Old Post Office, all of which still stand) were stately and solid cinctures in white marble. But when required to produce something poetic or sublime, he tended to stack and combine existing forms. Unable to choose between an Egyptian and a Greek theme for the monument, he went with both: His proposal showed a circular Greek colonnade that would serve as a kind of national hall of fame. Out of it would spring a needle-like obelisk, curiously flattened at the top. And so that no one would miss the theme, he placed a sculpture of Washington over the entrance, depicting the president in a chariot and driving a team of six horses. Here was something for everyone.

Construction began in 1848, but by 1855, work had slowed to a crawl, with only about 153 feet of marble masonry in place. Then came the most notorious incident in the monument’s history; it was occupied by the nativist Know-Nothing Party, which had been enraged by the gift of a stone from the Vatican (which was removed and evidently hurled into the Potomac). The occupiers remained for several years and even added about four feet of additional masonry (surely a first and last in the history of occupied buildings). In the national agony of the ensuing years, the monument languished once more, a disfigured torso on the Mall where Union soldiers bivouacked.

By the time of the centennial celebrations of 1876, the unfinished monument was a national scandal. A joint commission of Congress was established to complete it, only to be besieged by an importuning host of architects, sculptors, and other hopeful busybodies, each with a sheaf of sketches. By not rejecting or endorsing any of the proposals, the commission chose by default a design that was no design whatsoever, but mere construction. In just eight years, the remaining 400 feet of masonry were briskly added, and in December 1884, workmen attached the nine-inch cap of pure aluminum that forms the apex of the monument.

The real author of the Washington Monument, as Gordon tells it, is Lieutenant Colonel Thomas Lincoln Casey, who supervised construction in the District of Columbia for the Army Corps of Engineers. He was not only a brilliant engineer, first in his class at West Point, but also a paragon of probity: He would not serve hot coffee to his masons on the scaffold until he received permission from Congress. (A classic Gordon detail: He reminds us that coffee cost only 10¢ a pound in the 1880s). Casey revised Mills’s rather free-form obelisk according to the true proportions of an Egyptian obelisk, with a height that was precisely 10 times the width of the base. And so a design that had begun life as a neoclassical Egypto-Greek confection with an overwrought sculptural frontispiece was pared down to a pure abstraction that spoke of nobility, resolve, and eternity.

Had the monument been completed in 1783, as Congress had proposed, or in 1848, according to Mills’s design, we would probably have one of those grotesque national monuments to founding figures that disfigure some of the world’s great cities. I wish Gordon had included illustrations of some laughable absurdities that were proposed in the late 1870s. For example, the sculptor William Wetmore Story wanted to clad it in richly colored American marble and affix a grand portico to the front that would house his colossal statue of Washington. To have shown one or two of these High Victorian excrescences would have been a beneficial reminder to us how rare great art is, how it cannot be summoned forth on the demand of committees and bureaucrats, and how grateful we should be to have been handed down the world’s finest and simplest monument of political idealism.

Michael J. Lewis, a frequent contributor, is Faison-Pierson-Stoddard professor of art at Williams College. His article, "Wokeness and the English Language," appeared in the November 2021 issue.