harles Dickens is having a moment. In the wake of his 200th birthday in 2012, a slew of high-profile novels (including Donna Tartt’s The Goldfinch, Stephen Jarvis’s Death and Mr. Pickwick, and Tom Rachman’s The Rise and Fall of Great Powers, to name three I’ve reviewed in these pages) have aimed to imitate “The Inimitable,” as Dickens called himself. Minimalism, it seems, is dead: A proper 21st-century blockbuster must teem with orphans, con-artists, sidekicks, villains, mysterious benefactors, long-lost parents, and plucky heroes and heroines who triumph by the end. Its plot must be labyrinthine, full of reversals, reunions, and game-changing reveals. Its setting must be chaotic and picturesque. Above all, the modern blockbuster must be big. At 563 pages, Jonathan Franzen’s Purity is practically a featherweight compared with The Goldfinch or Death and Mr. Pickwick, which clock in at 775 and 816 pages respectively. Yet Franzen’s fifth novel—his first since 2010’s Freedom—manages, somehow, to feel longer than both. It is also a calamity.

Our heroine’s name, which makes Franzen’s effort to invoke The Inimitable even more obvious, is Pip. She’s 23 and has no great expectations, with a dead-end telemarketing job, six figures of student debt, and a depressed, pain-in-the-neck mother she tries vainly to placate. (She has never met her father, about whom her mother refuses to talk.) Pip lives in a filthy Oakland squat shared by a passel of grubby, unreliable types: transient Occupy members, a schizophrenic genius, a pair of German peace activists, a disabled man named Ramón, and a dumpster-diving married couple who alternately fight (“I’ll take my chances with moral vanity when the alternative is signing on with a divine plan that immiserates four billion people!”) and fornicate behind closed doors. 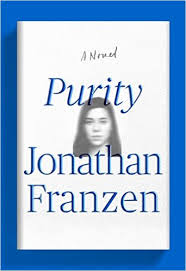 Deep down, Pip hungers for normalcy. “Oh, to have a job you liked, a mate you trusted, a child to love you, a purpose in life,” she laments. When beautiful, alluring Annagret, one of the squat’s resident Germans, urges her to apply for an internship at the Sunlight Project—a Wikileaks-esque organization run by a former East German named Andreas Wolf—Pip figures she has little to lose. Besides, Annagret says, the Sunlight Project can probably find her father.

In a devil-may-care moment, Pip shoots Andreas a flippant email. To her astonishment, he immediately writes back.

“In terms of universal admiration,” Andreas Wolf “was right up there with Aung San Suu Kyi and Bruce Springsteen.” After the Cold War, Wolf worked to expose the Stasi’s secret archives; since then he has broadened his scope “to social injustice and toxic secrets worldwide.” He’s handsome, unmarried, a “militant” feminist, a visionary. Back and forth the emails go, and Pip is soon in over her head. “Maybe we should tell each other some little thing we’re ashamed of. I’ll go first. My real name is Purity,” she writes.

“The secret of your name is safe with me,” Wolf replies. “If I told you, when I was seven years old my mother showed me her genitals, what would you do with that information?”

The reader recoils, but Pip is unfazed. “I would say holy shit and keep it to myself,” she writes, and with a sinking feeling, we realize Andreas has got her. Shared secrets are a deadly currency in Purity, binding confessor to confidant in codependence and shame. In the emails that follow, Andreas grooms Pip like a pro, tilting their correspondence toward heavy topics (fear, fame, secrecy, power) before finishing with a chilling meditation on predators and prey.

“I have often wondered what the prey is feeling when it is captured,” Andreas writes. “Often, it seems to become completely still in the predator’s jaws, as if it feels no pain.” In his final email, Andreas offers to pay off Pip’s entire student debt if she’ll join him for a three-month internship in Bolivia. Pip swallows the bait. “Oh my God,” Pip’s mother says, when she hears the news. “This is my worst nightmare. And now Andreas Wolf. This is a nightmare, a nightmare.”

Purity divides into seven chapters, shared among five narrators. This is standard procedure for Franzen, who likes to take an overarching theme (“correction” in The Corrections, “freedom” in Freedom) and refract it through multiple perspectives. (Guess what concept Purity riffs on?) In the second chapter, the novel turns from innocent Purity to villainous Wolf, flashing back to East Berlin in the 1980s, where our as-yet-unknown bad guy works as a counselor for at-risk youth. His motives, naturally, are less than pure. “The girls practically lined up outside his office door to drop their pants for him,” Franzen tells us. “He rendered a valuable service for the state . . . and was paid for his service in teen p—y,” which is really all Andreas thinks about. When he’s not busy seducing damaged girls, he masturbates compulsively. His relationship with his mother is, to say the least, fraught and sexually charged. He cries a lot. Sometimes he cackles proudly at his perversions; sometimes he blames his mother or “the sickness of the country” for the sickness of his soul. Always, his eyes are peeled for prey.

As the chapter wears on, Andreas does some very nasty things. Yet somehow the menace diminishes as his despicable actions accrue. Franzen’s timing is consistently off; whenever the plot should build up, he bogs us down in backstory, and he badly misjudges the extent of his readers’ interest in the dregs of Andreas’s filthy mind. The more the narrative wallows in its villain’s wickedness, the more we wonder: How on earth can a sociopath obsessed with sex and bent on murder be so incredibly dull? “It was as if he loved his mother so much, even now, that he subtracted the things that were disturbing about her and mentally implanted them in other females to make them frightening to him, make him prefer masturbation, and let his mother remain perfect,” Andreas tells himself, in a typically convoluted, overdetermined scene. “He had to kill the man he’d always been, by killing someone else.” Fine, we think. Get on with it!

Things don’t improve in subsequent chapters. Franzen sets a few subplots spinning and introduces several more protagonists, but the plots invariably fizzle while the characters—all intimately involved with Pip and with one another in ways they don’t at first fathom—devolve into despicable archetypes. Men, in Purity, are obsessed with sex. They’ll do anything to get laid. Women, who are either disloyal or crazy or both, make men their slaves by refusing to sleep with them (unless they don’t, in which case they turn cloying and dumb and eventually become lesbians). But women want babies almost as frantically as men want sex, so men—the sly dogs—can reassert their power by refusing to get their women pregnant.

One woman—the worst in the book—outsmarts her male counterpart and manages to knock herself up without his knowledge or consent. Pip’s conception is perhaps the most repulsive begetting ever described in fiction—she comes into being through an anal rape—though, to Franzen’s slight credit, he glosses over the extreme nitty-gritty. It’s a rare moment of discretion in Purity, which never misses the chance to delve into the sordid particulars of someone’s wretched sex life. One couple play ventriloquist with a stuffed animal to get in the mood. Throughout their 13-year marriage, they only have sex—the wife can only “achieve satisfaction”—in the three days surrounding the full moon. “We’d always relied on pain to heighten the pleasure that followed it,” the husband says, at the point where their ghastly relationship is crumbling. “My love was like the engine of a hundred-dollar car that had no business starting up and yet kept starting up.”

But what of the Sunlight Project, Andreas Wolf’s truth-telling organization headquartered in Bolivia? Actually, we don’t learn much about it; for Purity’s sake, Sunlight is just the vehicle that delivers Pip to Andreas for a hookup. “No, that was definitely nice,” Pip says, the first time they make out. “It was like, wowee-zowee.” Later, Andreas takes charge. “She liked taking orders from him,” Franzen writes. “Liked it more than anything else about him. . . . She beheld an emotional vista in which she was angry at her missing father, at all older men, and provoked and punished this father-aged man . . . and her body responded to the offer; but it was icky to respond to him that way. She let her bra fall to the floor.” A few lines later, Andreas looks up gratefully. “You shaved for me,” he murmurs. And, with a yelp of recognition, I found myself clapping my hand over my mouth with glee. Pain as pleasure, baby talk, submission, genitals with minds of their own? Yes, Jonathan Franzen, who once wrote an essay about sex in which he opined that “aesthetic elitism, sexual snobbery . . . are not the reprehensible attitudes that our culture makes them out to be” before concluding that “Victorian silences appeal to me,” has spent 565 pages riffing on Fifty Shades of Gray! Across the Atlantic, in Westminister Abbey, Charles Dickens is spinning in his grave.