ity on Fire, Garth Risk Hallberg’s 900-plus-page debut novel, set in New York in 1977, was a literary sensation long before it was published in October. The manuscript sparked a bidding war that culminated in a $2 million advance; Scott Rudin, who produced No Country for Old Men and The Social Network, optioned the movie rights. In the two years since, City on Fire has been relentlessly hyped and almost as relentlessly picked over, especially by critics who actually remember New York in the bad old days, when the city was bankrupt and the Bronx burned—unlike Hallberg, who was born in Louisiana in 1979.

The nitpicking is beside the point. City on Fire is a thrilling book. 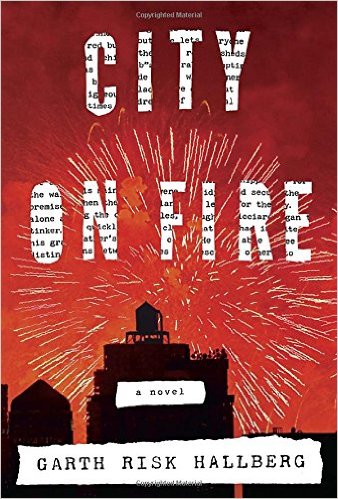 The novel begins in Hell’s Kitchen, where a “corduroyed and bespectacled brother” named Mercer Goodman and his boyfriend, a “bedheaded whiteboy in a motorcycle jacket” named William Hamilton-Sweeney III, are muscling a fir tree up 11th Avenue to their grungy, half-furnished loft. It’s Christmas Eve, 1976. Mercer, who left rural Georgia 18 months earlier, is equally besotted with New York and William, though the city proves easier to fathom than the man:

William would talk in only the vaguest terms about his life pre-Mercer: the period of heroin dependency in the early ’70s that had left him with his insatiable sweet tooth; the stacks of paintings he refused to show either to Mercer or to anyone who might have bought them; the imploded rock band whose name, Ex Post Facto, he’d annealed with a wire hanger into the back of the motorcycle jacket. And his family? Total silence.

All Mercer knows is that William is “one of those Hamilton-Sweeneys”—the ones with an eponymous Midtown skyscraper and a famous investment firm, and that William “still froze whenever anyone mentioned the Hamilton-Sweeney Company in his presence, as though he’d just found a fingernail in his soup and was trying to remove it without alarming his tablemates.” Then, at the girls’ school where he teaches, Mercer encounters a young mother with an uncannily familiar face. She is Regan Hamilton-Sweeney Lamplighter, and William turns out to be her brother. “We don’t exactly talk,” she tells Mercer. “We haven’t for years. In fact, I have no idea how to find him. I hate to impose, but maybe I could leave this with you?” She places a sealed envelope on Mercer’s desk, and the plot gets under way.

One of the plots, anyway. City on Fire is a crowded book. There are at least a dozen protagonists, whose paths will tangle and converge over the course of a year. First we get Charlie Weisberger, a nerdy Long Island 17-year-old who is headed to a New Year’s Eve show in the Bowery with Samantha Cicciaro, a husky-voiced NYU freshman. Charlie’s in love with Samantha, who’s sleeping with a married guy named Keith, whose estranged wife Regan—yes, that Regan—is spending New Year’s Eve in her father and stepmother’s penthouse apartment on the Upper West Side, where the Hamilton-Sweeney holiday gala is in full swing.

Also at the party, to Regan’s surprise, is Mercer (the mysterious envelope, which Mercer steamed open behind William’s back, contained an invitation). William, however, is downtown, hanging out backstage with his new acquaintance Charlie, who’s at loose ends after Samantha ditched him at the door. Now she’s shivering on a bench at the edge of Central Park, hoping to glimpse Keith (who’s actually at a strip club in Midtown) as he leaves the Hamilton-Sweeney party.

And then, from the balcony, Mercer hears “a pop, a metallic flaw in the otherwise immaculate hush of the Park, so small Mercer might have imagined it.” Down below, Samantha lies shot and bleeding in the snow.

Sam’s shooting gives Hallberg an excuse to loop in several more characters—a polio-crippled detective, a washed-up journalist, Sam’s blue-collar dad—whose lives he describes in carefully spaced, attentively detailed chapters. Between these sections, he deepens the stories of people we’ve already met. We read all about Keith and Regan’s courtship, Charlie’s lonely childhood, Mercer’s rural roots, William’s druggie punk years, and the moral rot that pervades the Hamilton-Sweeney business and family. It’s a lot to keep track of, but Hallberg has a light touch and a firm grip; his characters are vivid and distinct, and he’s an absolute genius with names. It’s hard to mix characters up when they’re called things like Bruno Augenblick, Amory Gould, Nicky Chaos, Carmine Ciccario, Keith Lamplighter, and Solomon Grungy.

Still, all this attention to minutiae and background could easily frustrate readers and hamstring Hallberg’s plot. How urgent can a whodunit be if its author is constantly digressing? Yet City on Fire’s widening storyline draws tighter and tighter as the novel goes on. Sam’s shooting turns out to be just one thread of a massive conspiracy that coils throughout the city and implicates every character; meanwhile, Hallberg cleverly seeds multiple subplots in the chapters he devotes to the past that germinate convincingly when the novel moves forward again.

As the coincidences and connections multiply, the narrative gains focus and intent. Everyone is hell-bent on something specific; whether it’s solving Sam’s case, finagling a plea bargain, or building a bomb, they’re all part of the same mushrooming story. When Charlie notes that his “suburban life is closing down like an aperture, while the city swells to fill the sky,” he might as well be describing City on Fire’s narrative, which pulls everything and everyone together before it explodes.

The climax comes on July 13, the night of the 1977 blackout. When the lights go out, the book’s protagonists are spread all over town; as Hallberg zooms in on one character after another, he paints a brilliant, panoramic portrait of the city in chaos. Certain moments are unforgettable. A motley crowd made up of “queens of the East Village… punk rockers, shorn of head, and some Latinas from around the way, and even a couple of insalubrious old hobos… howling at the moon” flows down the streets like “a force of nature, pressure bursting from an underground spring.” From a grocery on 14th Street, “women kept emerging with carriages full of Similac and Pampers.” On the Upper East Side, “some of the cafés have even dragged candlelit tables to the sidewalk, boxed seats from which to take in the night’s folly. When a Hispanic kid crashes his too-small bike into one of these tables, the couple there picks him up and brushes him off and sets him down for grappa.” Downtown, there are fires in the street. “People huddle around, holding what look to be broken car antennas, meat spitted at the end.” A bodega owner, waving his shotgun and yelling “in high-pitched esoteric English” manages to scare away a gang of looting Hell’s Angels; afterward, he “enters his store, locks the door behind him, and sits on a stool in the dark, weeping.”

And in various locations—atop the Hamilton-Sweeney building, beside Sam’s hospital bed, on highways and bridges and finally in the grubby loft in Hell’s Kitchen where the book began—Hallberg expertly wraps up his plot. The denouement is supremely satisfying, though it does come across as a bit over the top: No loose end is left dangling, and no heartstring goes untugged. Still, a book this huge deserves an extravagant finale, and Hallberg pulls the whole thing off. The pages describing the blackout teem with imagery that is epic, even biblical, and it works. Everything about City on Fire—its hugeness and sprawl, its melodrama, its fires and fireworks and explosions, even its author’s monumental advance—is earned.