ell Zink’s first novel, Wallflower, was published last year when she was 50. It made very little noise. By contrast, the buzz about Mislaid, her second, has been deafening. A full-length profile in the New Yorker, published just before the book came out, portrayed Zink as sui generis: raised in rural Virginia; “intentionally homeless” after college; bricklayer; secretary; ’zine publisher; punk-band member; wife; divorcée; expat (Zink has lived in Berlin for the past 15 years); and accidental pen pal (after she wrote him an email about Balkan songbirds) of Jonathan Franzen’s. Franzen peddled her to his connections and effectively dared her to write a book he could sell. She drafted Mislaid in three weeks. (“Agent bait,” Zink told the New Yorker.) The agents, along with every news juggernaut from the Wall Street Journal to NPR, bit. Suddenly Zink was the media’s favorite outsider artist, and Mislaid—a biting satire, they all said, of sex and gender and race—was, everywhere you looked, touted as this year’s most subversive, brilliant book. 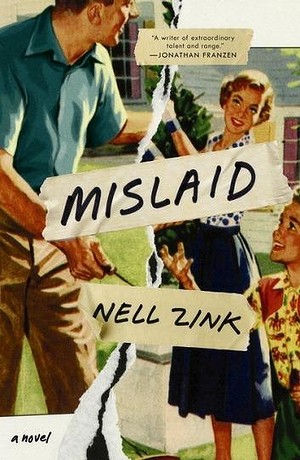 The novel begins at Stillwater College, an all-women’s school overlooking a leech-infested lake south of Petersburg, Virginia. “In the 1960s it was a mecca for lesbians,” Zink reports, before introducing us to Peggy Vaillaincourt, a slightly goofy debutante who, after mishearing a classmate’s taunt, informs her socialite mother she’s a “thespian.” (“You have chosen a very difficult path for yourself,” her mother says, before taking Peggy shopping for “a tea-length off-the-shoulder-dress made of boiled cotton with a flower print and tulle underskirts” to wear to cotillion.) After her debut, Peggy heads happily off to Stillwater, where she falls for Lee Fleming, a notorious poetry professor from a prominent family who is as “gay as a three dollar bill.” Lee seduces Peggy in a canoe, to their mutual (if incongruous) delight; soon, she’s shacked up in his decaying Victorian on the lake, having lots of sex in his “conversation pit as well as the bed that hung on brass chains from the ceiling and [on] the Bengal tiger skin.”

When the college gets wind of the affair, Peggy is expelled. When her parents find out, they’re horrified. And when Peggy discovers she’s pregnant, Lee grudgingly agrees to marry her.

Ten years fly by in eight hectic pages. Peggy and Lee’s son, Byrdie, is born, and Peggy does housework while Lee hosts streams of visiting gay male poets. It’s a terrible life. The sexual chemistry between Peggy and Lee soon evaporates, and Zink does a fine job describing Peggy’s mounting uneasiness, her queasy certainty that she’s both trapped and doomed. Peggy’s smart enough to see through Lee’s cronies (“you could take winos off the sidewalk in front of the drugstore and teach them to be poets in half an hour”), but she’s too young and naive to change her life. Even her vague plans to finish school someday are thwarted by the eventual arrival of Byrdie’s little sister, Mickey, whom Lee regards as “a reproachful bundle of petty envy that had grown on Peggy like a tumor.”

One day, poor Peggy comes home from the Safeway to find Lee “in a net muscle shirt, getting in the canoe with a boy.” Furious, she drives his car into Stillwater Lake; Lee responds by hinting darkly that she’s not well. “She had read enough lives of the poetesses to know all about inpatient psychiatric care,” Zink writes. “She knew he would be able to get her committed with no trouble at all. Driving a motor vehicle into a lake in front of your kids is not against the law—on private property it’s not even littering—but it’s madness.” So Peggy packs her car, grabs Mickey (Byrdie, at the last minute, stays behind with Lee), and goes on the lam.

They head south on dirt roads until they find an abandoned shack, move in, and—with the help of a stolen birth certificate—become Meg and Karen Brown, whose race, on the document, is listed as “colored.” (According to Zink, Virginia’s “one-drop” rule and centuries of miscegenation have made fair-skinned, fair-haired black people commonplace; Peggy and Mickey will find it easy to pass.) “You sure you don’t want to have her be white?” the school clerk asks when Meg registers Mickey/Karen—who is blonde and blue-eyed—for first grade. “We’re black and proud,” Meg answers. The clerk doesn’t bat an eye. “All God’s children attend the very same school,” she tells little Karen. “We like to know who’s black so we can help them out with affirmative action and a free lunch.”

It’s a preposterous set-up, and the quip about affirmative action isn’t particularly funny or fresh. Still, a satirical novel (if that’s what Mislaid is) need not be totally realistic, and one hopes the jokes will improve. After all, we’re only 50 pages into the book; so far, Zink has laid the groundwork for several different novels without having decided what she wants Mislaid to be. Perhaps she’ll turn the book into a madcap romp through the rural South’s dark underbelly, or a subversive and zany take on privilege and race. Perhaps she’ll turn back to gender and sex, and liberate Peggy as a lesbian. Maybe she’ll write a comedy of manners in which siblings raised as opposites—one a rich preppy white kid, the other an impoverished rural black kid—are reunited by accident.

Or maybe she’ll make Mislaid like all these novels at once, handpicking the most irritating, least coherent bits and pieces from each, and churning them all together into a nonsensical mess.

The fact is, when Peggy and Mickey become Meg and Karen, Mislaid goes completely off the rails. With 200 pages remaining, Zink gleefully abandons all pretense of plot and flits from anecdote to anecdote and character to character in a deranged, heedless fashion. Meg joins forces with a drug-dealing Native American named Lomax (who keeps his 11-year-old girlfriend hidden in his van) and makes a living foraging for psychedelic mushrooms in cow dung. Lee, back in Stillwater, digresses at length on fox hunting. Byrdie, a social success (read: preppy jerk) at boarding school, matriculates at the University of Virginia, where he rushes a frat. Karen becomes inseparable from Temple, the “other smart black kid” in her school, whose parents befriend Meg when they’re all forcibly relocated to a housing project. Karen piggybacks on Temple’s scholarship to UVA.

Between episodes of cutesy absurdist dialogue, during which every character comes to sound exactly like everyone else, Zink spouts nonsense (“His thoughts on his back porch surrounded him like a carpet of mice, immobilizing him…The mice of introspection were as effective as any buffalo herd”) and wallows in cliché. (“Gradually her fear faded to the existential angst that incessantly haunts all mankind in modernity.”) Meanwhile, the zaniness escalates. The druggies take over a squirrel sanctuary. A lesbian professor ravishes Meg in a cornfield. Karen is nearly gang-raped (the scene is played for laughs) in Byrdie’s frat. A drug bust leads to an interminable court scene in which—finally—Byrdie recognizes his sister and the whole family comes together again.

You’d think the reunion would mark a narrative turning point, or that Zink would welcome the chance to tie up a couple of Mislaid’s very loose ends. Unfortunately for us, there’s no relief in sight. Even the big themes—race, class, gender—that seemed to compel Zink at first are unceremoniously abandoned as the novel lurches forward. “Get your hands off her, boy!” a cop bellows at Temple, who is hugging Meg, near the end of the book. “I’m fine,” Meg insists. “We’re friends.” But the cop advances ominously, insisting Temple empty his pockets…at which point Zink, for no reason, chucks the whole thing. “Suddenly bored and somehow also disappointed, even disgusted, the cop wished Meg a nice day and returned to the street.” Why would an author set up this kind of scene only to drop it? Mislaid utterly misfires, leaving us bewildered. Nothing happens. The cop disappears. The protagonists scatter. The novel ends. Bored and disappointed, even disgusted, we close Mislaid with a sigh of relief. 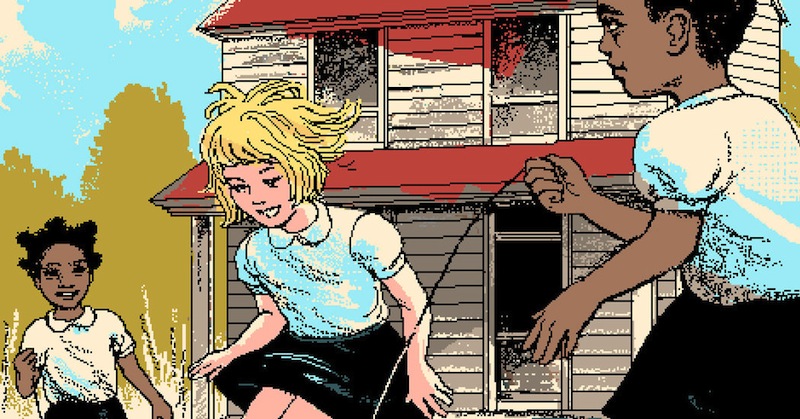