our Heart Is a Muscle the Size of a Fist, Sunil Yapa’s debut novel, takes place on the first day of the 1999 protests against the World Trade Organization conference in Seattle. Fifty thousand demonstrators, some of them strange bedfellows indeed, surrounded the convention center where the WTO was scheduled to meet: “Teamsters and turtles” marched in solidarity with farmers, labor unionists, NGO workers, consumer-protection groups, and anarchists, among others. When an anarchist “black bloc” began smashing windows, the understaffed and underprepared Seattle police panicked. Within hours, the march turned from a mildly surreal spectacle into a violent showdown between protestors and police, who fired tear gas, pepper spray, and rubber bullets into the crowds in a vain effort to disperse them. Hundreds of protestors were arrested; several WTO meetings were canceled or postponed. Property damage was tallied in the millions of dollars. The cops ran out of tear gas. The following day, Seattle’s mayor called in the National Guard. 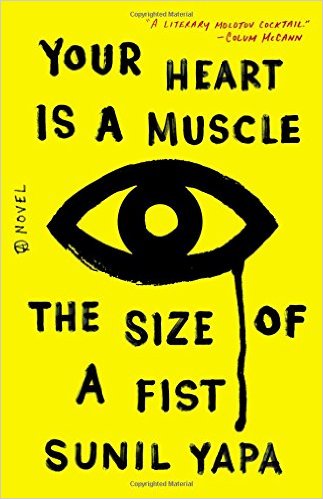 Your Heart Is a Muscle the Size of a Fist

Yapa’s novel opens, fittingly, with a struck match. Victor, a homeless 19-year-old, “with his dark eyes and his thin shoulders and his cafecito con leche skin, wearing a pair of classic Air Jordans, the leather so white it glowed,” is getting high beside the tent he’s pitched below a freeway. Soon he’ll join the marching crowds—not to demonstrate (Victor claims he’s “absolutely allergic to belief”), but to sell weed to the protestors. Victor’s a messed-up kid—lonely, angry, tired, “his heart of hearts poisoned by a bitter, wounded hatred, a sickness of the soul.” Through his jaded eyes, we get our first glimpse of the WTO protestors.

They’re a motley bunch, chanting and singing and “popping out from every hole and door, waves of protestors sloshing in the streets, bright-eyed thousands appearing as if summoned.” At first, all Victor can do is gawk. Topless girls with duct tape across their nipples cry “Death to the police state.” There are “dreadlocked djinns dangling from the lampposts, cameras around their necks” and civil-rights lawyers in combat boots. Yuppies are “stomping into the dawn from their suburban warrens, from their gorgeous mansions that glittered fat on the Sound.” It’s a parade, Victor decides, a bizarre and trippy pageant, all these “sweet, round, high-fructose faces” glowing in solidarity. “Hey, man,” Victor says, sidling up to a hefty guy in a blue jacket—a union man, it turns out, marching right next to all the hippies and freaks. “You need any weed?”
But poor Victor has badly, and hilariously, misjudged the scene. Everyone he approaches—from the union guy to a geezer banging a goatskin drum—recoils, then tells him to get lost. “You guys are some pretty cool heads,” he says, rather desperately, to a pair of groovy-seeming baby boomers.

“Are you trying to sell me marijuana?” the husband snaps, before storming off to tattle to a cop. Even a “sexy undergrad” who plops down next to Victor wants nothing to do with his stash. “Look, you don’t understand. This is a drug-free area,” she tells him. “This is a protest march,” Victor counters, wearily exhaling smoke. “Where’d you hear that?” she says. “This isn’t a protest march. This is a direct action.” And with that, she plucks the joint from Victor’s lips and crushes it beneath her shoe.
It’s a great setup—amusing and revelatory all at once—and it cleverly shines light on both the privileged, fuddy-duddy protestors and the clueless, half-baked kid. Victor’s failed business venture nicely illuminates an interesting paradox: While the rich white folks protest corporate capitalism, the homeless black teenager—a budding entrepreneur!—is desperate for a sale.

In subsequent chapters, Yapa introduces six more narrators. Two are activists, three are cops, and one is the Sri Lankan delegate to the WTO. This should work beautifully—what better way to showcase the protests’ complexities and contradictions than to describe key issues from multiple vantage points across both sides? But hold on.

First we meet John Henry, a holier-than-thou career activist, “a man you could imagine in a dream of the Himalaya, high above the clouds.” (Actually, he’s from Detroit.) Once he was a storefront preacher; now he leads “a congregation in the streets” and spends a lot of time yammering about the beauty of struggle and how much he loves his people. John Henry’s girlfriend—a skinny, dreadlocked white woman named King—is another experienced dissident, “trained in the tactics, techniques, and philosophy of nonviolence.” Deep down, of course, she’s someone entirely different—a woman with a dark (but easy to guess) criminal secret, a violent temper, and a dangerous tendency toward rage.

The novel falls apart. Yapa’s writing turns mushy and sentimental, riddled with rhetorical questions. Everyone waxes moony and philosophical, and all the characters sound exactly the same.


On the other side of the barricades, we get Officer Timothy Park—jumpy and hostile, his face disfigured by scars, the very model of a trigger-happy Bad Cop. Right away he gets in trouble for tangling with the protestors; a few pages later, to his partner Julia’s exasperation, he pepper sprays a carload of Quaker activists who give him a little lip. Julia, a tough-talking, gorgeous, Latina cliché (her steely demeanor, naturally, belies her tender and damaged heart) privately considers Park “as radioactive as a blast survivor”—which turns out to be exactly what he is. Park’s mental and physical scars date from the Oklahoma City bombing; Julia was traumatized by the Rodney King riots in Los Angeles. They’re like a roll call of late-20th-century catastrophes.

Julia and Park report to Bill Bishop, chief of police, by all accounts a hell of a guy. A 30-year veteran of the force, Bishop favors community policing, opposes departmental racism, and cheerfully marches—though he’s straight—in Seattle’s Gay Pride parade. Naturally, he’s a secret sufferer, too. Ever since his beloved wife died and his troubled teenage stepson ran away, Yapa tells us, Bishop has had “a heart full of loss and a head full of doom.”

Yapa’s policemen and protestors lack Victor’s spark; they’re drab stereotypes with utterly predictable inner conflicts, artlessly deployed at intervals throughout the novel’s increasingly hackneyed plot. First Park, tipped off by the un-groovy boomers, confiscates Victor’s drug stash; then King and John Henry show up to save Victor from the Man. In a trice, formerly apolitical Victor morphs into a burgeoning activist. (He learned about the power of the people, it seems, by reading his beloved dead mother’s books.) When his new best friends need one more body for “lockdown,” Victor eagerly volunteers; after being chained to fellow protestors, he looks up to see a familiar uniformed man. Guess which police chief turns out to be his estranged stepfather?

As these and other coincidences pile up, the novel falls apart. Yapa’s writing turns mushy and sentimental, riddled with rhetorical questions (“Was there not a single word he could say that had not been emptied of value?”) and bogged down in treacly cliché. “Son, how easily an open heart can be poisoned, how quickly love becomes the seeds of rage. Life wrecks the living.” That’s Victor, channeling Chief Bishop, though it’s often hard to sort out whose perspective the narrative is mired in. Everyone waxes moony and philosophical, and all the characters sound exactly the same.

Symbolic details are invariably overdetermined and overdone. Victor’s Air Jordans, for instance, stand for sweatshop labor, late-stage American capitalism, misplaced materialism, greediness, parental indulgence, and, finally, for fatherly love. We hear so much about fear and loss and loneliness and tears that we grow immune to their significance. Which is frustrating, since Yapa writes beautifully when he wants to. An extended digression describing the Sri Lankan civil war is vivid and convincing, and there are plenty of small moments (as when Yapa describes feuding protestors “yelling philosophies in each other’s faces”) that come across as perfectly apt. Taken together, these sections aren’t quite enough to save Your Heart Is a Muscle the Size of a Fist. But they certainly leave the reader curious about Yapa’s next novel. 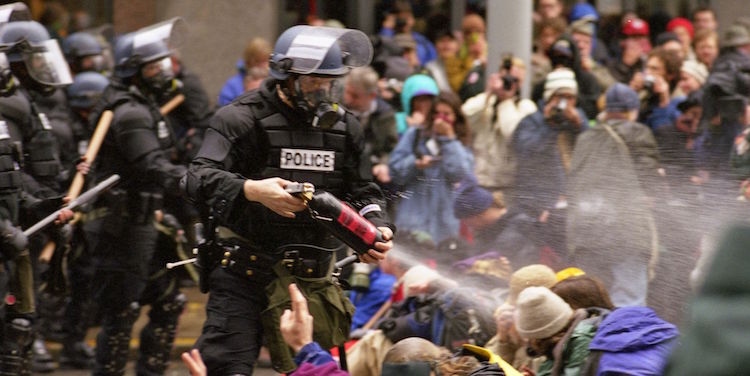