mong the Ten Thousand Things, Julia Pierpont’s debut novel, opens with a letter that aims to shock. “Dear Deborah,” the book begins. “This is a letter about Jack. I began sleeping with your husband last June.” The real shock to the reader, however, doesn’t come from the letter’s contents. Nor does it come from the snippets Pierpont subsequently quotes from the accompanying “pages and pages, none of it so romantic, a lot dirtier than I remembered” of emails Jack’s mistress has printed out to show his wife. Our real shock comes a few pages later, when this package of salacious evidence is mistakenly opened—and read—by Jack and Deborah’s eleven-year-old daughter Kay. “For Mommy,” the doorman of their Upper West Side building says, handing Kay a tantalizing, half-closed box she thinks might contain a birthday present. On the way up to her family’s apartment, she peeks inside. 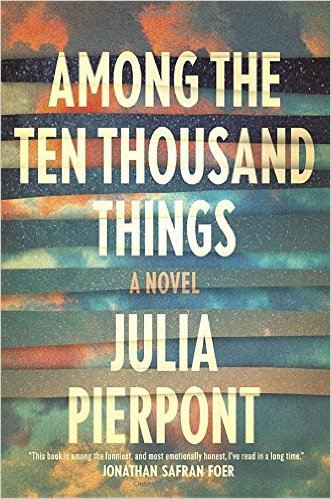 Among the Ten Thousand Things, by Julia Pierpont

Numb, horrified, Kay hides the box in her closet and worries. “The box was a secret she kept, the whole next day at school. She found herself in history, in math, in science, not knowing how she got there, not remembering the halls.” Finally, Kay shows the box to her older brother Simon, “because he was theirs too.” But Simon, who’s fifteen, reacts very differently: “He was angrier than she’d thought he’d be, and when he’d read enough, without saying anything to Kay, who was about to ask what did he think, without even a word to her, he pushed down on the pages and lifted his chin and shouted: “Mom!””

Among the ten thousand American novels about upper-middle-class families whose charmed lives are shattered by divorce, Among the Ten Thousand Things surely contains the ghastliest finding-out-he-cheated scene of all. One minute Deb Shanley is cooking family dinner; the next, she’s sitting on her daughter’s bed reading the explicit, first-hand details of her husband’s adultery, while her children, who read them first (Simon “defiantly not crying”, Kay “shrinking into the wall, trying to press through plaster”) stand watching. Every lewd detail resonates thrice. “What were the words her kids had read, these awful words they’d seen?” Deb thinks. And the words—right there in front of us—horrify. Simon and Kay wait as if paralyzed. “Each minute took all its time.”

These agonizing minutes—the dreadful, sickening time between bad news and its painful consequences—spool out over the days that follow. Deb, it turns out, has known about the affair for months; when Jack promised to end it, she took him back. Which is unfortunate, since Jack—a conceptual artist who does pretty much exactly as he pleases—is a cad of the first order. (His marriage to Deb also started with an affair—a fact she still feels guilty about and he doesn’t.) It simply doesn’t occur to Jack to worry about Simon and Kay. Only a few minutes after Deb confronts him with the box of emails, he’s actually humming “to himself, to the night. Things would turn out okay,” he thinks. “For him, somehow, they always had, and so they always would.”

Pierpont, who switches narrators roughly every chapter, has a real knack for illuminating her characters’ personalities from the inside out; we therefore experience Jack’s selfishness first hand. Here he is, the following morning in his studio, letting himself deftly off the hook:

Marrying Deb, having the kids, all that was right. It was he who’d gone wrong, or the world. He’d felt it these last few years. Something to do with the Internet and jihad and all the natural disasters they’d been having: There was a buzz in the air that made it harder to move forward, a feeling that they were living in a time with no future. And then there had been that girl, in her see-through blouses with the breasts under them, soft and pointed up like curious things. With her full lips and full ass, and how did she stay so full when everything else every day was being depleted, when—
Listen, look:
It’s not like I killed anybody.

By the end of the page, Jack has practically convinced himself he’s done his family a favor. “True, it was hard on the kids, but that was why he wanted to explain…” he thinks. “The girl was a channel that let him be a better man at home.” We roll our eyes, but Pierpont has done her job: Jack is a type, yet his personality is vivid and all too believable. He’s that vexing conundrum: the self-absorbed jerk who utterly lacks malice. By the time life catches up to him, as it eventually does, we’ve essentially forgiven him his trespasses.

Deb comes across as nobler and much less interesting than Jack: though she spends the novel preoccupied with the children, she persistently botches her concern. (She worries much too much about Simon, whose “anger” is largely bluster, and not nearly enough about Kay.) Tucking Kay in that first night, Deb does her well-intentioned best. Sometimes married people meet someone new and exciting, she says, and sometimes they make mistakes. “But it doesn’t mean anything,” she says. “And it isn’t about you.” This sounds exactly like the sort of thing one should tell a worried child at bedtime, yet Deb only succeeds in making Kay feel worse. “Where she’d gone wrong, it was just a word, how could she have known,” Kay thinks after her mother leaves, awake and miserable in bed. “What she should have said: It doesn’t mean everything.”

Kay’s attempt to puzzle out just how much divorce does mean, how much infidelity matters, is the best scene in the book. In idle moments, Kay likes to dream up Seinfeld plots; after having read Jack’s obscene emails, she brainstorms a few ideas. “Jerry and Elaine are married….George gets a letter by mistake from a woman who is having an affair with Jerry. He goes to Monk’s to tell Elaine, and she is like, So?” Kay writes, on the bus to a school field trip.

George says: “But she said she is sleeping with your husband! Jerry!” And Elaine’s still like, Yeah, so? LAUGHS. George says: “She said she wanted him to lick her on the nipples!” Elaine puts her hand on the table like she’s about to leave and says: “Listen, Peterman has me writing about urban riding crops. I don’t have time for this.”

The episode continues—becoming more pornographic and more legitimately hilarious by the line—until a nosey classmate snatches Kay’s notebook. (“Perv,” she sneers. Kay shrivels in shame.) Of course the classmate’s mother calls Deb, who begins packing in a frenzy. “She’d made her first very big decision…she would take the three of them to Rhode Island, ” though neither kid wants to go. “[Deb’s friend] Izzy had asked where they were summering. So? Here was summer.”

Unfortunately, once Deb moves out, Pierpont’s book loses its sharp, original edge. The spur of the moment escape to a (fortuitously unrented) vacation house feels contrived; the convenient presence there of Jack’s art-school chum Gary, who has always carried a torch for Deb, is unconvincing. (Like most of the novel’s other secondary characters, Gary feels more like a plot device than a person. The minute he’s no longer required, he disappears in a puff of smoke.) Pierpont doggedly describes the weeks that follow, but the episodes don’t quite add up. Simon gets a girlfriend, Kay drifts here and there, Deb flirts both with Gary and with the idea of forgiving Jack, and the reader resists the urge to skip. Instead of feeling fraught, the summer just feels aimless.

Yet two dreamy interstitial chapters—one halfway through the book, one at its very end—save Among the Ten Thousand Things from becoming a generic, if moving and well written, saga of one family’s dissolution. In the first, Pierpont describes the vacant Shanley apartment, suspended in eerie stillness. “Folds in the mostly made beds sank deeper into themselves. Stains stayed stains, in the hampers and dresser drawers. In the kitchen, a milk-clouded spoon fixed to its bowl and magnets drifted down the refrigerator,” she writes. “Only the wireless went on, invisibly complicating the air.” In the second, she pans ahead to Simon and Kay’s adulthood. These strange, short interludes, which disrupt the novel’s chronology and give the reader a god’s-eye-view of the months and years to come, are vivid and arresting; Pierpont knows exactly which details to highlight, and she deftly evokes the way time passes and the way it seems, in times of crisis, both to accelerate and to stand uncannily still. Seasons change, a family comes home, the children pass into difficult phases and out of them. A marriage ends. Wisdom teeth erupt. Pets sicken, parents die. Apartments are sold. Children grow up. “The end is never a surprise,” Pierpont writes, after a few dazzling pages of perfectly evocative prose. But what she means, perhaps, is that the end might not actually matter. Among the Ten Thousand Things succeeds most when Pierpont pays close attention to the fraught, surreal moments at the quiet center of every upheaval. “We thought we were living in between-time, after this and before that,” Pierpont writes, though it’s neither clear nor important which of her characters is speaking. “But it’s the between-time that lasted.”