half century ago, when Daniel Patrick Moynihan was compiling his extensive list of problems contributing to the breakdown of the black family, he included this: “Observers report that the Negro churches have all but lost contact with men in the Northern cities as well. This may be a normal condition of urban life, but it is probably a changed condition for the Negro American and cannot be a socially desirable development.” 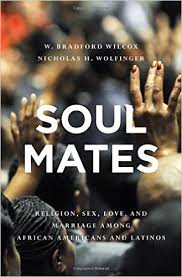 He reported that the only religious group to whom these men seemed to be gravitating were Black Muslims, “a movement based on total rejection of white society.” The loss of church, particularly as a factor helping to teach responsibility and middle-class values to black men, led Moynihan to conclude that “the tangle of pathology is tightening.”

It is among the most bitter ironies of this story that the black family experienced a uniquely awful decline even while African Americans remained the most religious group in the country. And while church attendance has typically been a reliable bulwark of marriage and responsible child-rearing for white Americans, its effects on blacks in recent years have been much weaker and in some cases nonexistent.

The two begin their book with an account of how changes in the American family have adversely affected all racial groups in America, but blacks and Latinos disproportionately so. “In 1960, only 5 percent of children were born out of wedlock; in 2011, 41 percent of children were,” they write. “From 1980 to 2011, the percentage of children born out of wedlock rose for blacks from 56 to 72 percent and for Latinos from 24 to 53 percent; by comparison, for whites it rose from 9 to 29 percent.” More than two-thirds of black children lived outside of a married, two-parent family in 2011.

The authors argue that both economic and cultural factors have led to lower rates of marriage, higher rates of divorce and, most important, higher rates of out-of-wedlock childbearing. Scholars such as Andrew Cherlin and Robert Putnam have made the case that the decline in the family was due in large part to the underemployment and falling wages of working-class men in the late ’60s and early ’70s. Without the skills necessary to earn a good living, non-college-educated men became less desirable marriage partners. Not only that; women’s entry into the workforce meant that women needed men’s contributions less. Or thought they did.

And that in turn also weakened marriage. As Wilcox and Wolfinger write: “Even as women’s labor-force participation began to rival men’s they still found themselves doing the lion’s share of housework and child care. This threatened marriages by producing more domestic strife. Accordingly, men and women, especially in working class and poor communities where women’s relative gains have been strongest, became less likely to get and stay married.”

The authors go to great pains to show that they have not approached their subject from a particular political perspective—Wilcox describes himself as a married, conservative, religious person, while Wolfinger is single, liberal, and secular. For every cultural argument they offer for the problems of the family, they advance an economic one. They are always sure to suggest that racism, segregation, or even the historic legacy of slavery could be among the causes of the problems they see. In addition to changing the culture of the ghetto, they suggest things like eliminating jail sentences for nonviolent drug offenders.

Their effort to be bipartisan sometimes results in the disingenuous use of quotations from sources. For instance, they say they agree with the New York Times’s Charles Blow when he says that he “takes enormous exception to arguments about the ‘breakdown of the family,’ particularly the black family, that don’t acknowledge that this country for centuries has endeavored, consciously and not, to break it down.”

But on the next page, the authors cite the changes in welfare policy in the 1960s that had the unintended effect of increasing dependence on the government and “penalizing marriage among the poor and working class.” For Blow and many on the left, the problem is that government is not giving the poor and working class enough money, not that it has given them too much. Indeed, later in the same column Blow writes, “I don’t buy into the mythology that most poor people are…happy to live with the help of handouts from a benevolent big government that is equally happy to keep them dependent.”

Happy might not be the right word—but dependence is dependence.

The real contribution of Soul Mates comes in its analysis of the marital habits of blacks and Latinos and how religious life has and has not affected them. The first set of statistics that stand out are the ones regarding infidelity. Twenty-nine percent of black women report “infidelity or suspected infidelity” in their relationships, compared with 22 percent of Latina women and 7 percent of white women. And those are among the ones who are married. When one looks at partnerships among never-married adults, the patterns become even more stark. Thirty-six percent of black men have had two or more sexual partners in the past year, compared with 23 percent of Latino men and 21 percent of white men.

Even if all the Great Society policies that conservatives see as contributing to these problems were to end tomorrow, the legacy of these decades of family breakdown and mistrust would be hard to erase any time soon.

Forty-two percent of unmarried black women say that “most of the single men I know are not earning enough money.” But 55 percent of them say, “men cannot be trusted to be sexually faithful.” While there are those who claim that these findings are the result of the legacy of slavery in which black families were forcibly broken up, such theories do not explain why black marriage rates were higher and single motherhood rates were lower in the first half of the 20th century than they are now.

“Whatever their historical roots,” note Wilcox and Wolfinger, “concerns about infidelity and distrust come up frequently in our interviews.” Keisha, one of the women they spoke with, explained: “I was in a relationship for a long time….It ended because I was cheated on; so I don’t think I don’t [sic] really value relationships anymore either.”

The authors speculate that there may be other cultural causes of this instability: “Since the 1960s, American popular culture has taken an increasingly hedonistic turn, such that consumers…are exposed to an ethic of immediate gratification…that encompasses a range of behaviors from drug use to sexual infidelity.” Since blacks and Latino children consume almost twice as much television as whites, this may be having some effect on their behavior.

But the bottom line is this: Even if all the Great Society policies that conservatives see as contributing to these problems were to end tomorrow, the legacy of these decades of family breakdown and mistrust would be hard to erase any time soon.

The only institution that is working against these trends is the church. Unfortunately, for blacks, the church seems to have a weaker effect than it has on whites and Latinos when it comes to all sorts of problems afflicting the communities. For instance, “Churchgoing whites are about half as likely as their less religious peers to have used drugs in the last month, compared to about one-third less likely for Latinos and approximately 15 percent less likely for African Americans.” The same is true for binge drinking.

Similarly, there is a strong association between regular church attendance and the belief that premarital sex is always wrong. Regular attendees are also less likely to believe that a single mother can bring up a child as well as two parents can. But in both cases the effects of churchgoing seem to be stronger for whites than for minorities.

So what about marriage? Regular church attendance increases the odds by about two-thirds that someone will be married. For black women, though, the odds go up only about 50 percent. And for Latina women, there is only a 17 percent increase in marriage rates. Church attendance can actually move couples away from the altar, according to the authors, if one partner (usually the woman) is attending and the other is not. In other words, a woman’s standards may rise by being a regular churchgoer and she may be more inclined to reject the available options.

Marital happiness tends to increase with churchgoing for all races. And usually it tends to increase marital stability. But the old adage that couples who pray together stay together does not necessarily hold true across the board. Surprisingly, the researchers find that “regular church attendance substantially decreases divorce rates, but only for whites.”

Perhaps, the authors propose, this is a selection problem. Whites who attend church are already less likely to believe that divorce is acceptable; indeed, that may be why they want to go to church. But for blacks, attending church is “the expected thing to do.” For whites, on the other hand, churchgoing has become “less conventional.”

For many blacks, church is more of a social or even a political institution than it is a place to hear messages about personal sin. Wilcox and Wolfinger sample the messages at churches in a number of black and Latino neighborhoods and find that they are fairly watered down. As one black woman reports about her Baptist church in Harlem, her pastor “doesn’t talk about [sexual conduct] often.” The one time he did, the many single mothers and unmarried couples were very uncomfortable.

The authors write: “We suspect that the abundance of nontraditional families in black and Latino congregations has often left their clergy and lay leaders disinclined to address questions of sex and out-of-wedlock childbearing. This may help explain why religion is less likely to guide the sexual and reproductive behavior of blacks and Latinos.”

All of which is to say that the situation is even worse today than it was when Moynihan wrote his report. It’s not simply that not enough black men are attending church—a decline he had already begun to see. It’s that the people going to church are not getting the messages they used to get. The tangle of pathology is indeed tightening.