‘There is a way to be a working mother that is full of pride, satisfaction, and self-love.” So says Lara Bazelon in her new book, Ambitious Like a Mother. “To get there,” she explains, “we have to give up on the impossible—the work-life balance mirage—and embrace the simple truth that when we are happy and fulfilled, our children benefit.” Realistically, she notes, “part of that journey may involve the collapse of a marriage.”

Which is exactly what happened to Bazelon herself—and what set her on the path to explaining that, in the words of her subtitle, “Prioritizing Your Career Is Good for Your Kids.” Bazelon, a law professor and pro bono defense attorney, grew up with a mother who worked full-time as a psychiatrist. Her mother went to medical school at a time when few women did. Her father worked even more, though, as a lawyer who regularly missed dinner with the family and traveled out of state for several days at a time.

At the time, Bazelon remembers longing for a mother who stayed at home, one who—like her friends’—could sew Halloween costumes from scratch. But looking back, she wonders why her mother didn’t get to work more in the mold of her father, why she didn’t pursue a different and more demanding field of medicine, why it was on her every night to put dinner on the table or take kids to the doctor or make sure the house was clean. There were babysitters and others to help with these tasks, but Bazelon marvels that her father never seemed to be involved in such household management and child care.

This “second shift” that working women must do at home when their paid work is over has become a subject of much complaining over the past few decades. And Bazelon suggests it is time for women to reset the expectations of their partners (and society) so there can be a more equal division of labor.

Bazelon acknowledges never discussing such matters in her own relationship before it was too late. In a marriage of two ambitious young lawyers, that might have seemed like an obvious topic. But she notes, “I gave almost no time and attention to thinking through the duller details of day-to-day life as a partnered, professionally striving parent, much less to figuring out whether Matt was on the same page as me.” Instead, she “picked a partner who seemed perfectly progressive on paper” and whom she assumed “would intuitively understand [that] the division of labor would naturally fall equally to both of us.”

It would be easy to make a cutesy remark here about the feminist guys out there who support women’s ambitions right up until it interferes with their own. But the more important observation is that Bazelon views all of these choices by men and women through a political lens. I grew up in a home with two conservative academics as parents, but whose arrangements were far more egalitarian than those of Bazelon and her circle of Bay Area friends. My father drove us to school most mornings and often picked us up. He helped with homework and attended athletic competitions. He changed sheets in the middle of the night and took me on every midnight run to the emergency room for asthma attacks. But my parents also moved for his career, not my mother’s. She worked part-time until my sister and I were ready for kindergarten, and she was in charge of cooking, cleaning, and kids’ activities. When she did go back to work full-time, my sister and I would do our homework in her office, not his.

Splitting everything down the middle is never practical. Just as people have professional specialties in part because learning everything about every aspect of, say, the law, is inefficient, people also have specialties inside the home. One might say that the expectations for women’s specialties are driven by a sexist society. But there is no question they are driven by women’s desires as well. Most women with young children don’t want to work full-time, and it is not just because of their second-shift responsibilities. It is because they want to spend more time with their children.

Bazelon argues that it is time to “decouple gender from childcare.” Perhaps these days we should give Bazelon credit for acknowledging that “pregnancy, childbirth, and breastfeeding… are unique to women,” but she cannot imagine that the desire to nurture babies and young children is also a pull that women on average feel more than men do.

This is apparently because Bazelon herself does not. It is tempting to say that Ambitious Like a Mother is all an elaborate attempt to get over the guilt Bazelon felt in leaving her infant and toddler for most of each week while she commuted to another city to pursue her career ambitions—the first step on her road to divorce. But Bazelon and many of those she interviews are true believers in the centrality of work over family. One ob-gyn she interviewed told her, “I never changed an overnight diaper.… I never burped her…. I cut every corner I could.” She added, “It is important to have an identity other than being one’s mother or spouse.” And Bazelon writes: “Who would I be if I weren’t a lawyer, a writer, and an aspiring professor? No one I recognized I wanted to be.”

What this indicates is that Bazelon has come to see herself as indispensable in her professional role—but not in her personal one. The book is littered with tales of her crusading work exonerating the wrongfully convicted. Perhaps she is right that were it not for her, these men would still be sitting behind bars. But there is no acknowledgement alongside these assertions that she is also her children’s only mother. And despite the repeated expert testimony of feminist theorist Jill Filipovic (who has no children but does have a popular Substack) that “human beings need a lot of resources, we need love and connection from multiple people,” the care of extended family members and friends is not a substitute for the love of a mother.

For some women, especially those who are working at a job they love, work is very important. For others, even some highly successful women, their most important identity is being someone’s wife or mother. Bazelon claims that her book is not an indictment of the latter. Rather, she wants to give women more choice in prioritizing their career. She advocates, of course, more paid parental leave, more access to low-cost child care, and more flexible work schedules. She wants to remove the stigma from women who choose full-time work, and she wants to get men to do a better job supporting women’s careers by doing more of the second shift.

Despite the fact that her own children routinely accuse her of being “blurry,” that is, not being present or paying attention to them, she says, “the life I wanted was my father’s, not my mother’s. I was not willing to make her sacrifices. I wanted his ambition, not her constraints.” But she also wants us to believe that she is a good and devoted mother and that she is doing the right thing for her kids, setting an example for them.

Bazelon’s use of survey research to support her point is problematic, to say the least. “Empirical studies showed that the children of working mothers were doing fine—in fact, many were thriving,” according to one 2018 study. The large-scale study of 100,000 adult children across 24 developed countries found that children of working mothers were just as happy as children of stay-at-home mothers. But as Bazelon notes, the study doesn’t control for hours worked. If, like Bazelon, you want to spend half your days in another city from your children, if you want to work 70 hours a week when your children are not yet ready for preschool, you are in a different category than women who teach third grade or work at Starbucks or teach yoga classes—but still spend many waking hours each day with their children.

Because everything old is new again, Bazelon excavates a 1980s trope that what’s important is for parents to spend “quality” time with their children or that they are “intentional” about the moments they share. But what does it mean to spend “quality time” with a child? According to one 2014 study Bazelon cites, it is defined as being present and involved “during structured and educational activities.” But any parent can tell you that some of the most meaningful and interesting engagement with children comes not from these pre-planned programs, but rather from frequent ordinary interactions while folding laundry or driving a child from one place to another. These are the moments when parent and child let their respective guards down (sometimes because they are not looking at each other) and let slip their observations about the world. Even with infants and toddlers, the most memorable times are often not the elaborate field trips with their photo opportunities but the times when stress is lower and young children are comfortable learning to move or make new sounds in a familiar environment.

No one is saying that women or men should spend every waking hour with their children in anticipation of such breakthroughs. But it stands to reason that more time spent in ordinary interactions will on average result in relationships that are deeper and more durable. As our lifespans have gotten longer and the number of years our children are in our care have become a relatively smaller part of our lives, it’s useful to remember that spending less time working while our children are young is not the sacrifice it once was. As the late Midge Decter once said, “Women can have it all. They just can’t have it all at the same time.” 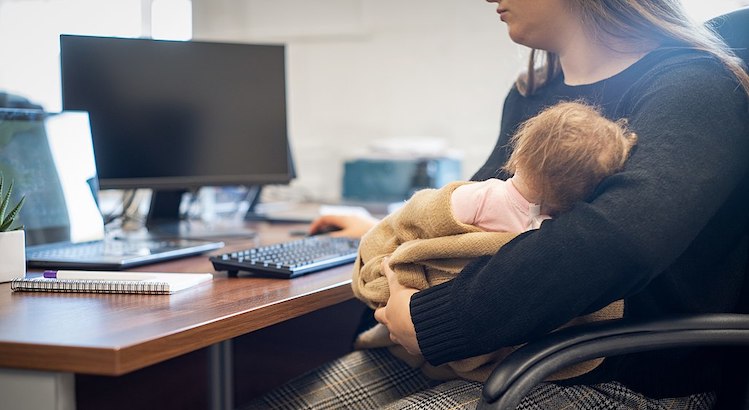