he Atheist Muslim opens with snow in Saudi Arabia. The author, Ali Rizvi, is in fifth grade at the American school in Riyadh, where students are folding glittery snowflakes out of construction paper to decorate the halls for winter. An education ministry official stops by unannounced. Watching the children go about their task, he becomes irked. The official grabs a pair of scissors and snips a corner from each flake in the room. Five-pointed stars are allowed, 11-year-old Ali learns, but six-pointed ones are not. 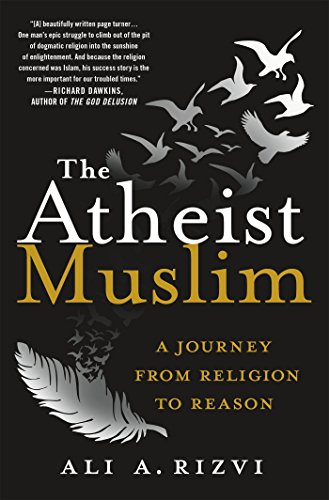 Rizvi’s book isn’t about Jews, of course, but about Muslims and their faith. It’s a tale of his own exit from Islam and an exploration of whether being a “cultural” Muslim—an agnostic or questioning or even an unbelieving Muslim—is a viable possibility or merely a contradiction in terms. But while Muslims are both the book’s protagonists and its likely intended audience, Jews (and to a slightly lesser extent Christians) play heavy supporting roles. They appear and reappear not only as the default targets for Muslim contempt, but collectively as an example of a faith community that has labored successfully to adapt their faith, customs, and group identity to the modern age.

Rizvi, who was born to Shiite parents in Pakistan, is now a physician and medical-communications professional living in Toronto. He grew up in Pakistan, Libya, and mainly Saudi Arabia in the 1980s, a witness to the violence of Islamic extremism. His friends and family often disagreed about whether the bloodshed should be blamed on America, Israel, colonialism, politicians, or the media. They were unanimous, however, on one point: It had nothing to do with Islam. He recalls being told: “This land [Saudi Arabia], the land that had first brought Islam into the world . . . had Islam all wrong.”

At 12, while in Riyadh, Rizvi decided to find out for himself. He read the Koran in English, a language he had mastered in international schools. To his horror, he found that the book appeared to sanction virtually all that the Saudis were doing: hacking limbs, beating wives, and beheading polytheists. When he presented the offending verses to community elders, they merely offered further excuses, dismissing famed translator N.J. Dawood as an Iraqi “Yahoodi” (Jew) who was not to be trusted. Any passages that seemed problematic, he was told, were due either to Muslim misinterpretation or were relevant only to a certain time or place (never mind that Islam claims to be God’s final revelation and Muhammad the model for all mankind). Rizvi had heard enough. He became convinced that most of the Muslims in his life were good people not because of their creed, but despite it.

Thus persuaded, he soon ran up against one of the more curious markers of our age: the charge of prejudice or even racism that attends any effort to scrutinize faith—particularly Islam. “The fear of calling a spade a spade is seemingly ubiquitous,” he writes, “and almost exclusively happens with the case of religion.” There is a stark difference between criticism of Islam and anti-Muslim bigotry, he observes, yet both are “lumped together under the unfortunate, reductive umbrella term ‘Islamophobia.’” Western elites, he laments, are crippled by the fear of being labeled bigots (a condition he terms “Islamophobia-phobia”). Here, Rizvi enlists the Jews as subjects for comparative study, underlining the contrast between “Islamophobia” and anti-Semitism—the former being a judgment passed on ideas, the latter on people. “Human beings have rights and are entitled to respect,” he writes. “Ideas, beliefs, and books don’t and aren’t.”

Rizvi is on firmest ground when examining this and other failings of the “regressive left,” a phrase he borrows from his fellow Muslim reformist Maajid Nawaz. For liberal, agnostic, or atheist Muslims in Islamic-majority countries, the Western “privilege” that chafes most is the hypersensitivity with which we approach matters of faith. Reform-minded Muslims are “censored, persecuted, and angry,” Rizvi writes. “They find the polite, tiptoe-around-taboos approach to criticizing religion in the West frustrating, a privilege of open societies where the right to free speech is taken for granted.”

Rizvi cites Secretary of State John Kerry as the archetypal regressive leftist, noting in particular those times Kerry has declared members of ISIS “apostates” over their putatively distorted vision of Islam. Lost on Kerry is the fact that branding other Muslims apostates is ISIS’s stock-in-trade and that few things are sillier to Muslims than a Catholic American diplomat of Jewish stock hectoring them on the finer points of their faith. “Salman Rushdie is an apostate. So am I,” Rizvi writes. Kerry’s demonization of apostasy, he claims, “plays right into ISIS rhetoric.”

Like his fellow Muslim-born atheist Ayaan Hirsi Ali, Rizvi judges Islam to be both reformable and redeemable. Islam can survive a rejection of inerrancy and remain intact.


Letting go of faith isn’t easy. It is the relinquishment not only of one’s moral mooring, but one’s friends, community, and, often,  family. Rizvi exemplifies the pro-science, pro-Enlightenment “atheist Muslim” of the book’s title, but he acknowledges that many others can’t and won’t make that leap. Nor does he believe Islam has nothing in it worth preserving. “There are elements in the Koran that were a significant improvement over the status quo at the time of its writing,” he maintains, adding that some of the book’s earlier verses—particularly those from Muhammad’s early prophetic phase in Mecca—are unmistakably idealistic. The author writes warmly about certain Muslim customs: breaking bread at Ramadan iftars and convening family for Eid—and gives the impression he intends to continue them with his wife, the fellow atheist-Muslim commentator Alishba Zarmeen.

But for a more flexible, modern Islam to succeed, he argues, one obstacle looms largest: the doctrine of scriptural inerrancy. “Suppose you still believed in Allah and Muhammad, and still embraced the basic philosophical principles of Islamic faith,” he suggests, “but considered the Koran to be divinely inspired instead of divine and inerrant.” Polls show only 1 in 10 American Jews and 3 in 10 American Christians deem the Bible the literal word of God, he observes, yet both faiths survive in the United States. Islam, he believes, can survive a similar rejection of inerrancy and remain intact. Like his fellow Muslim-born atheist Ayaan Hirsi Ali, Rizvi judges Islam to be both reformable and redeemable.

The prose here is often surprisingly breezy, and the title over-promises: This is not a comprehensive guide to reforming Islam or a roadmap for reconciling “cultural Islam” with unbelief. Instead, it’s a casual discourse on whether and how Muslims might steer their pre-modern faith into the contemporary age—and the tale of one man’s experience of trying to do just that.

For that, Rizvi deserves much credit. Few subjects today are more consequential than this, and his choice of title alone is almost certain to put his life at risk. That grim fact in itself explains why Rizvi’s book is so vital.

Oren Kessler is deputy director for research at Foundation for Defense of Democracies, a think tank in Washington, D.C.