Many years ago, when I was the editorial-page editor of a New England newspaper, the telephone rang at my desk. On the line was the head of the Washington Post Writers Group, which syndicates columnists, and he was offering me a regional exclusive: The Reverend Jesse Jackson was about to begin producing op-ed columns. Would I be interested in running them?

“I might be interested in running them,” I said, “but will Jackson actually be writing them?” His answer suggested that I was not the first editor to have posed the question. Choosing his words with care, he replied: “I can guarantee that he’ll be signing off on every column.” This memory returned to me as I was reading Jill Abramson’s Merchants of Truth.

It is difficult to conjure up too much sympathy for Jill Abramson’s stymied rise. She is a standard politicized journalist whose left-wing convictions are rarely disguised. Hers is a world in which she and her circle of friends and colleagues “lean left” while looking habitually askance at the “right wing.” Moreover, from a professional standpoint, she’s led a charmed existence despite her humiliation. After a very brief apprenticeship, Abramson graduated to the rarified ranks of Time, and from there her trajectory has been consistently upward. Even her abrupt dismissal from the New York Times yielded perches at the Guardian and elsewhere. And as she mentions more than once, she teaches in the Harvard English Department, where her students, “as well as the students I taught… at Princeton and Yale,” give her much satisfaction.

Now she has written her big book about her experiences. And as it happens, what might have been another score-settling memoir is (apart from the inevitable settling of scores) primarily an inquiry into what Abramson regards as the crisis of modern journalism—the gathering of news, the separation of fiction from fact, the maintenance of standards and “the fate of the republic”—in the wake of the Internet.

Her literary model, I am bound to say, is embarrassing: David Halberstam’s The Powers That Be (1979), that ludicrously heroic quintet of corporate profiles (Time, the Washington Post, the New York Times, CBS, the Los Angeles Times) from the golden age of media power and self-importance. But her approach, I am equally bound to say, is an improvement over his. Abramson set out to chronicle the challenges facing two endangered institutions (the New York Times, the Washington Post) and two insurgent products of the brave new world (BuzzFeed, Vice) in journalism’s most desperate age.

As I was reading Merchants of Truth, however, a problem presented itself. A number of reporters, notably Michael Moynihan of Vice, have made a persuasive case that innumerable passages in Merchants bear an uncomfortably close resemblance to unattributed sources. I leave it to others to decide whether the various examples constitute laziness, malpractice, or, at worst, plagiarism; but they do cast one paragraph, in particular, in an interesting light. Paying tribute to one John Stillman, “my brilliant young friend and assistant,” Abramson declares that Stillman

helped shape this book and…as my research, reporting, writing, and editing assistant, he made contributions from beginning to end that made this book possible…. He drafted portions of this book and provided a sharp eye throughout in editing the manuscript. His perceptive analysis and fluid, vivid prose were crucial in bringing this story to life.

Which brings me back to Jesse Jackson and his syndicated column. One of the mysteries of Merchants of Truth, for me as reader, was not so much its underlying thesis as its curiously erratic quality. Simply stated, the chapters and sections in which she recounts her own adventures at the New York Times are fluent, consistent in tone, and to some degree, engaging. By contrast, the descriptions of the ups and downs of Vice are nearly unreadable—a bewildering mixture of technical minutiae, hip phraseology, and relentlessly irrelevant detail and chronology. I suspect these tonal differences clarify where Abramson ends and Stillman begins, and vice versa.

Or put another way: While Jill Abramson may have signed off on every chapter in Merchants of Truth, her editors at Simon & Schuster—notably Alice Mayhew, who “had a perfect ear for tone… and, during the writing process, for anything that was even slightly off-key”—may not have done so.

To be sure, at this juncture in the volatile news business, it’s difficult to judge the validity of Abramson’s argument. Is “the fate of the republic” really at stake, or the future of an industry? Between the overnight loss of advertising and (to a lesser extent) circulation revenue, and the evolving habits of news consumers, the Post and Times came very close to oblivion. She makes the case that an editorially diminished Times appears to have successfully adapted to the digital challenge; the Post is now in safe hands as the gewgaw of the Internet’s chief titan, Jeffrey Bezos. Likewise, while BuzzFeed and Vice both began as online hipster projects not far removed from the Web’s foundation in porn, they have since graduated to something like respectability in the cycle of news and opinion.

To that extent, Abramson is cautiously optimistic about the “business of news.” I am not. Even as Merchants of Truth was going to press, both Vice and BuzzFeed showed ominous signs of financial distress and organizational turmoil. Similarly, as she describes in wearisome detail, the commercial survival of the Times has come at a high cost in editorial quality, and its prospects—certainly the future of its print edition—are problematical. For that matter, while the Post enjoys the benefit of Bezos’s philanthropy, it is not at all clear that the inheritors of his Amazon empire will share his enthusiasm.

All of which is to restate the obvious: that the invention of the Internet has devastated the American newspaper business, and probably unto oblivion. Innumerable smaller and medium-sized papers have already disappeared, or, like their larger metropolitan siblings, they hang on in stunningly diminished form.

As it happens, Abramson entered journalism at a time when it was not just lucrative but, from a business standpoint, profligate as well. I was employed at the Los Angeles Times in the 1980s and, like Abramson on the other side of the continent, have pleasant recollections of fat Sunday editions, high profit margins, comfortable travel budgets, multiple bureaus, and tastefully appointed executive dining rooms. And yet, even then, it was evident that the correlation between commercial success and editorial distinction was probably imaginary, especially when the advent of television in the 1940s led to the demise of afternoon newspapers and left most communities at the mercy of monopolies.

Abramson is correct to lament the loss of copy editors and institutional memory, the demise of resources, and the relentless pressures to reduce the substance of journalism to a lowest common denominator. But in the good old days, she and her fellow journalists would have been wise to lament the absence of competition as well. For, in many respects, the culture that she admires—what might be called the professionalization of the newspaper trade—led to its increasing estrangement from the buyers of newspapers.

Journalism is a business. If, however, its practitioners tend to regard it as a kind of religious vocation, largely intent on allegiance to the faith, the distance between priesthood and flock will inevitably widen. Accordingly, Merchants of Truth is full of nostalgia for the old priestly traditions: the famous “wall” between the commercial and editorial precincts of the enterprise; the emphasis on nurturing careers instead of manufacturing a marketable product; and above all, the notion that journalists are anointed to preserve and protect democracy as largely defined not by citizens, or by public officials, but by journalists. When Abramson writes about “facts,” she is talking about facts as described and ratified by her fellow journalists, and when she writes about “truth,” she refers to the truth as a consensus of journalists.

Which explains, to a degree, why the Internet has been so destructive to the newspaper business and to “news” magazines. Once the monopoly of news and opinion was broken, the vacuum was swiftly filled and gave rise to all manner of popular heresies and heterodox doctrines. This is disconcerting to journalists who, like Abramson, have known no other environment. And while the Internet has been more liberating than destructive, it’s hard to pretend that the emergence of BuzzFeed and Vice, or Breitbart or the Huffington Post and the Big Bang of the media universe are unalloyed good news.

Still, it is worth noting the mythology that informs Merchants of Truth and the Washington Post’s corporate slogan that “democracy dies in darkness.” In truth, American democracy got along fairly well, and for a very long time, without the presumption of journalists. The modern news business, as Jill Abramson has known it, is a modern invention. Giant metropolitan newspapers like the Post or Times barely existed before the late 19th century. Broadcast journalism, such as it is, came of age within living memory.

Indeed, up until the past half-century, newspapers were largely written and edited by raffish, semi-educated characters from The Front Page, not the college boys of All the President’s Men. And at the dawn of the republic, the media resembled the present day more than not: a vast collection of disparate voices, catering to every conceivable fancy and prejudice, conveying information without fidelity to truth, ungoverned by schools of journalism or the strict separation of narrative and advertising. Not that Merchants of Truth seems aware of all this, which means this tiresome tome serves as a reminder that the “fight for facts” applies to the past as well as the present. 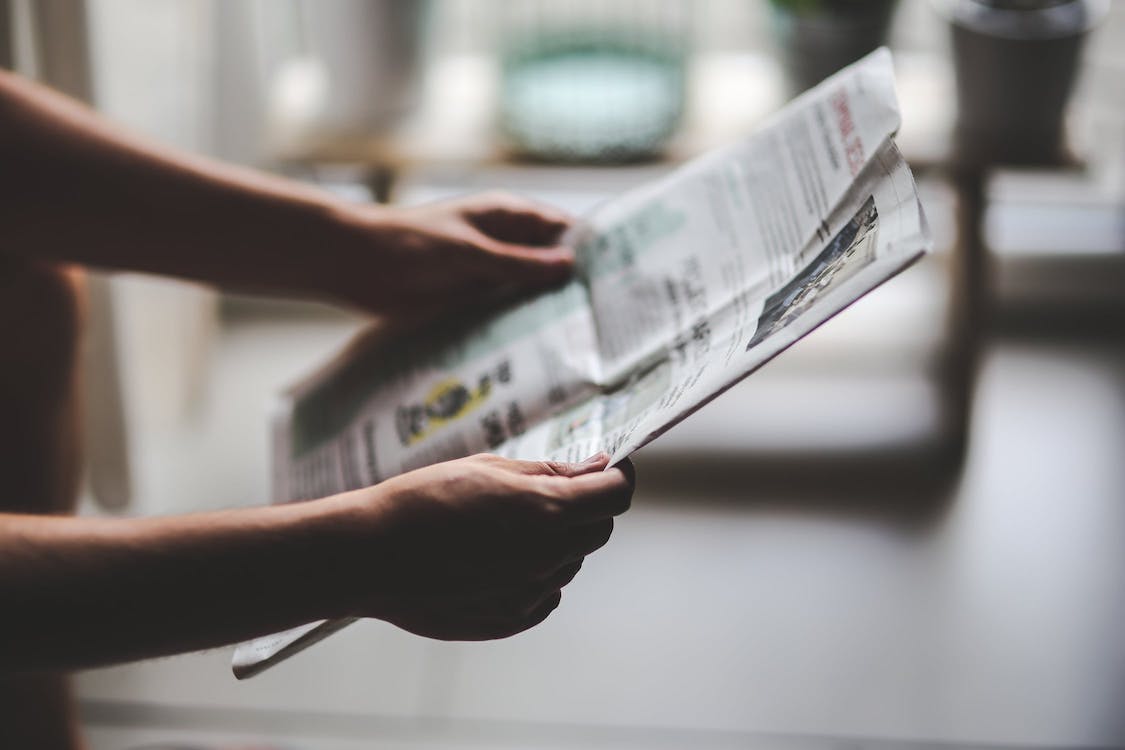 Philip Terzian, a journalist in Washington, is the author of Architects of Power: Roosevelt, Eisenhower, and the American Century.