Daniel Okrent says toward the end of The Guarded Gate, his engrossing new history of the Immigration Act of 1924, that his book is a “bleak tale of eugenics, immigration, racism, and the corrupting potential of scientific authority.” Bleak may be an understatement.

The drastic restriction of immigration to the United States in the four decades after the act’s passage is the more familiar part of his tale. “In 1914, the last year before the tumult of war disrupted the immigrant flow, more than 1.2 million Europeans had entered the country,” Okrent writes. “The 1924 law sliced it . . . to no more than 160,000.” Even that much-reduced figure can be misleading. Crucially, the law enshrined national quotas based on the ethnic composition of the U.S. population in 1890. Thus, “the lands comprising most of the Russian Empire sent 189,198 people to the United States in 1921.” Four years later, that figure was 7,346. “Some 222,260 Italians entered the country in 1921; in 1925, under the new regulations, only 2,662 were admitted.”

There had been negligible immigration from Greece before 1890, so its allowance was pitifully small. From a high-water mark of 46,000 Greeks in 1914, “the merciless mathematics of the quota limited Greece” to 100 a year. And spare a thought for the eighth Luxembourger to arrive at Ellis Island in June under the Immigration Emergency Act of 1921 (which prefigured the permanent 1924 law). He was immediately deported. The monthly allotment from the Grand Duchy was seven.

Immigration from northern and western Europe—from the U.K., Ireland, Scandinavia, France—was far less impeded, since citizens from those countries were already plentiful in the 1890 Census. The quotas, as Okrent puts it, were “what the anti-immigrant forces had wanted all along: a device that would hold the door open for those of their own ethnic heritage and nail it shut for those they despised.” And they allowed the restrictionists, however implausibly, to deny their discriminatory motives, “for nowhere in the act’s nearly ten thousand minutely detailed words could one find the terms ‘Italy’ or ‘Italian,’ ‘Russia’ or ‘Jew,’ ‘Greece’ or ‘Greek,’ or any other proper-noun descriptors of the European peoples or nations the bill had targeted.”

From the distance of almost a century, some of the restrictionists of our own day offer a bloodless defense of the 1924 Act. Yes, it is regrettable that millions of Jews and other Europeans kept out by the quotas might have come to our shores and escaped the slaughter of World War II—but, it is said, their heartbreaking fate was unforeseeable and the fault of Hitler. American lawmakers in 1924 were reacting sensibly and democratically to the unprecedented waves of newcomers who had arrived in the three decades before. Patrick J. Buchanan recently offered a pithy version of this argument: “All peoples to some degree resent and resist the movement of outsiders into their space… Our leaders in the 1920s understood this and took steps to halt the migrations until those who had come could be assimilated, and, in a word, Americanized. It worked.”

The men whose vision was embodied in the 1924 Act did not by and large believe that the immigrant masses could or even should be assimilated and Americanized. Okrent gives us the view of Kenneth Roberts, who for years had been banging the drum for restriction in the pages of the Saturday Evening Post, the largest and most influential of American magazines in those pre-radio, pre-TV days: “If America doesn’t keep out the queer, alien, mongrelized people of Southeastern Europe, her crop of citizens will eventually be dwarfed and mongrelized in return.” This was not the extreme view of an outlying crank; the Saturday Evening Post was the beating heart of the mainstream media.

For the highbrow version, Okrent gives us Fairfield Osborn (Princeton, 1877), Columbia University professor of zoology and president of the American Museum of Natural History and the New York Zoological Society. In 1925, Osborn gave thanks to the philanthropist Mary Harriman (mother of Averell), winner of the Gold Medal of the National Institute of Social Sciences, whose munificence had helped make possible the great legislative triumph of the year before—the “wise, deliberate… exclusion of citizens we cannot welcome to our country.” Osborn’s concern, to be clear, was not the assimilation of the lower orders but the protection and perfection of those at the top. At last, he said, “we are tending toward the selection of the best, the exclusion of the worst.”

The Immigration Act of 1924 was hugely popular. The vote in the House was 308–62; in the Senate, 69–9. Good old-fashioned prejudice and xenophobia no doubt played a part, along with fears of Bolshevists and anarchist bombers. What really ran up the score, however, was the prestige and authority of pseudoscience.

A few Boston Brahmins had, since the 1890s, been pushing for literacy tests and other stratagems to slow the rate of immigration, but success kept eluding them. Then, starting in the years before World War I, America went crazy for the new branch of applied biology known as eugenics.

In a nutshell, the eugenicists were hereditarian extremists. Extrapolating from Darwin’s theory of evolution via natural selection and the more recent laws of inheritance discovered by Gregor Mendel in his experiments on pea plants, they thought they could enhance the human race. Humanity, they believed, was built on a hierarchy of races, genetically determined. Those at the top of the pyramid (Nordics), if only they could be exhorted or induced to mate with one another, would pass their moral, physical, intellectual, and spiritual gifts to their offspring (along with blue eyes and blond hair). The lesser breeds, morally, physically, and intellectually inferior by various degrees, were unfortunately surpassing their betters in one key skill: reproduction. Even worse, they were intermarrying with their betters to produce mongrel offspring. Best that they be kept at a distance, or even sterilized. (Dozens of states passed compulsory sterilization laws for the mentally defective and were blessed with the approval of the Supreme Court, 8–1 in the notorious 1927 Buck v. Bell case.)

As Okrent notes, “this ferment of racial analysis was a direct, if almost certainly unintended, product of the Darwinian revolution: once you establish that not everyone is descended from Adam and Eve—and thus not genetically related to one another—anything goes: racial differences, racial hierarchies, racial hatred.” And though eugenics may sound to modern ears like Darwin for Dummies, it wasn’t the dummies who led the parade. It was the best and brightest, good progressives, pioneering conservationists, highly credentialed scientists and intellectuals.

Mary Harriman’s subventions to the influential Eugenics Record Office in Cold Spring Harbor, founded by Charles Davenport (Harvard, Ph.D., 1892), began in 1910. Madison Grant (Yale, 1887, and Columbia Law School) introduced the idea of a “Nordic” super-race, under siege by the “unfit,” with his 1916 book The Passing of the Great Race, edited and promoted by the famous literary editor Maxwell Perkins, who shepherded a growing list of eugenics authors at Scribner’s in between his better-known work with the likes of F. Scott Fitzgerald and Ernest Hemingway. Lothrop Stoddard (Harvard, Ph.D., history) produced possibly the most influential work of popularization with his sinister 1920 bestseller (also a Scribner’s–Maxwell Perkins production), The Rising Tide of Color Against White World-Supremacy.

Many of these eugenics notables are all but unknown today, deserved casualties of the Nazis’ having “weaponized” their work, as Okrent puts it. But they were superstars in their day. President Warren Harding recommended Stoddard’s book. Okrent notes the observation of a 28-year-old diplomat at the time: “Nothing good can come out of modern civilization, in the broad sense. We have only a group of more or less inferior races incapable of coping adequately with the environment which technical progress has created. This situation is essentially a biological one. No amount of education and discipline can effectively improve conditions as long as we allow the unfit to breed copiously and to preserve their young.” This was George F. Kennan. He “confided these thoughts to his diary on July 13, 1932. Less than three weeks later, just five hundred miles to the southwest, in Berlin, the Nazi Party won a plurality of seats in the Reichstag.”

It’s a grim and sordid story. But Okrent, who is steeped in the political and cultural life of the period thanks to his splendid books on Prohibition (Last Call) and the building of the Rockefeller Center (Great Fortune), is a companionable, witty, and judicious guide. “Even as eugenic ideas were embraced by the untrained, the unserious, and the unbaked,” he writes, “the readiness of substantial, credentialed institutions and investigators to accept the early claims of the eugenicists made a certain amount of sense. Science only knows what it knew yesterday, as altered by what it learns today; tomorrow’s discoveries are suspended in a fog.” It probably didn’t help that millions of Americans at the time were still farmers or only a generation removed from the land—people for whom selective breeding and the culling of herds was the stuff of workaday life. Still, they should have known better. You can’t elevate humanity by treating people like livestock. 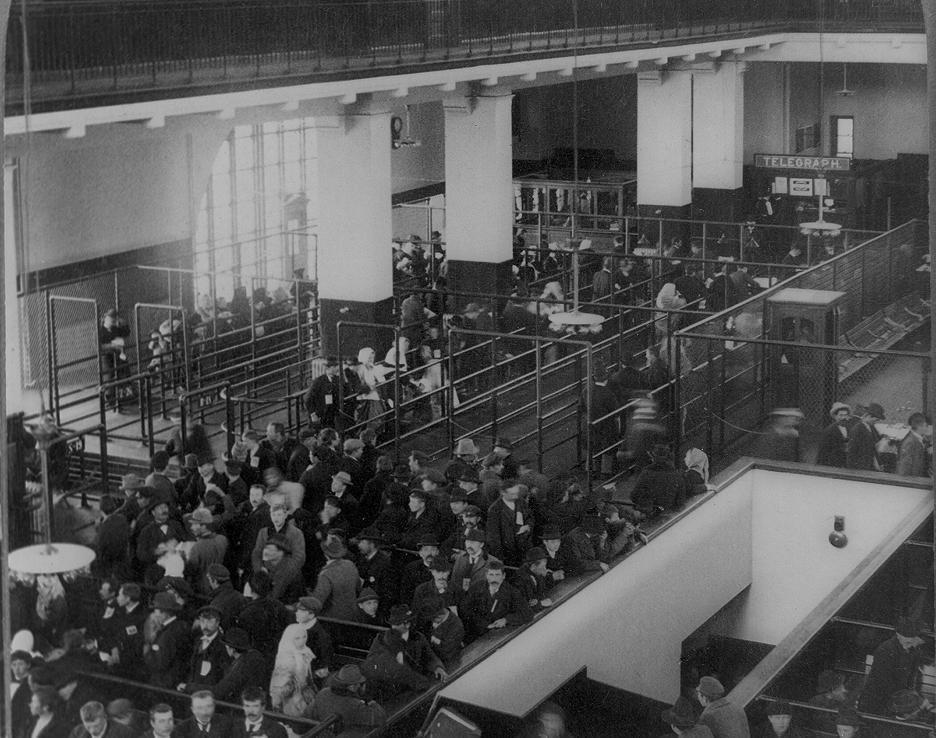 Richard Starr reviewed The Heartland in Commentary’s March issue. He was editor of the Weekly Standard.