n 2001, the European Union set about framing a constitution for itself. The Brussels mandarins had seen the future, and it looked transnationalist and technocratic—which is to say, it looked like the EU. The document was to usher in a new European century. But decisive “No” votes in France and the Netherlands in 2005 meant that it was never adopted. Today the EU constitutional treaty is memorable for occasioning one of Pope John Paul II’s final, and most prophetic, political interventions. It had to do with the constitution’s preamble.

Since Christianity had shaped the “humanism of which Europe feels legitimately proud,” the ailing pontiff argued, the constitution should make some reference to Europe’s Christian patrimony. His appeal was met with accusations of bigotry. The pope had inflamed the post-9/11 atmosphere of “Islamophobia,” one “anti-racism” outfit said. Another group asked: What about the contributions made by the “tolerant Islam of al-Andalus”? Former French President Valéry Giscard d’Estaing spoke for the political class: “Europeans live in a purely secular political system, where religion does not play an important role.”

Douglas Murray recounts this episode early on in his fiery, lucid, and essential polemic. It epitomized the folly of European elites who would sooner discard the Continent’s civilizational heritage than show partiality for their own culture over others’. To Murray, this tendency is quite literally suicidal—hence the “death” in his title.

The book deals mainly with Western Europe’s disastrous experiment in admitting huge numbers of Muslim immigrants without bothering to assimilate them. These immigrants now inhabit parallel communities on the outskirts of most major cities. They reject mainstream values and not infrequently go boom. Murray’s account ranges from the postwar guest-worker programs to the 2015 crisis that brought more than a million people from the Middle East and Africa.

This is dark-night-of-the-soul stuff. The author, a director at London’s Henry Jackson Society (where I was briefly a nonresident fellow), has for more than a decade been among Europe’s more pessimistic voices on immigration. My classically liberal instincts primed me to oppose him at every turn. Time and again, I found myself conceding that, indeed, he has a point. This is in large part because I have been living in and reporting on Europe for nearly four years. Events of the period have vindicated Murray’s bleak vision and confounded his critics.

Murray is right: Time isn’t mellowing out Europe’s Muslims. “The presumption of those who believed in integration is that in time everybody who arrives will become like Europeans,” Murray writes. Yet it is the young who are usually the most fanatical. Second- and third-generation immigrants make up the bulk of the estimated 5,000 Muslims who have gone off to fight with the Islamic State.

The first large wave of Muslim immigrants to Britain arrived soon after World War II. Seven decades later, an opinion survey conducted (in 2016) by the polling firm ICM found that half of Muslim Britons would proscribe homosexuality, a third would legalize polygamy, and a fifth would replace civil law with Shariah. A different survey, also conducted in 2016, found that 83 percent of young French Muslims describe their faith as “important or very important” to them, compared with 22 percent of young Catholics. I could go on with such polling data; Murray does for many pages.

He is also correct that all the various “integration” models have failed. Whether it is consensus-based social democracy in the Nordic countries, multiculturalism in Britain, or republican secularism in France, the same patterns of disintegration and social incohesion persist nearly everywhere. Different European governments have treated this or that security measure, economic policy, or urban-planning scheme as the integration panacea, to no avail.

Murray argues that the successive failures owe to a basic lack of political will. To prove the point he cites, among other things, female genital mutilation in the UK. Laws against the practice have been on the books for three decades. Even so, an estimated 130,000 British women have had their genitals cut, and not a single case has been successfully prosecuted.

Pusillanimity and retreat have been the norm among governments and cultural elites on everything from FGM to free speech to counterterrorism. The result has been that the “people who are most criticized both from within Muslim communities in Europe and among the wider population are in fact the people who fell hardest for the integration promises of liberal Europe.” It was Ayaan Hirsi Ali, the fierce Somali-born proponent of Enlightenment values and women’s equality, who had to escape Holland under a death threat, not her persecutors.

And Murray is right when he says that Europeans hadn’t staged a real debate on immigration until very recently. The author might be too quick to dismiss the salutary fiscal and social effects of economic growth and immigration’s role in promoting it. At various points he even suggests that Europeans forgo economic as well as population growth if it means having to put up with fewer migrants. He praises hermetically sealed Japan, but he elides the Japanese model’s serious economic, demographic, and even psychological disadvantages.

All this is secondary to Murray’s unanswerable argument that European elites had for years cordoned off immigration from normal political debate. As he writes, “whereas the benefits of mass immigration undoubtedly exist and everybody is made very aware of them, the disadvantages of importing huge numbers of people from another culture take a great deal of time to admit to.” In some cases, most notably the child-sex grooming conspiracy in Rotherham, England, the institutions have tried to actively suppress the truth. Writes Murray: “Instead of carrying out their jobs without fear or favor, police, prosecutors, and journalists behaved as though their job was to mediate between the public and the facts.”

s it possible to imagine an alternative history, one in which Europe would absorb this many migrants from Islamic lands but suffer fewer and less calamitous harms? Murray’s surprising answer is yes. Had Europe retained its existential confidence over the course of the previous two centuries, things might have turned out differently. As it was, however, mass migration saw a “strong religious culture”—Islam—“placed into a weak and relativistic culture.”

In the book’s best chapters, Murray departs from the policy debate to attend to the sources of Europe’s existential insecurity. Germans bear much of the blame, beginning with 19th-century Bible scholarship that applied the methods of history, philology, and literary criticism to sacred scripture. That pulled the rug of theological certainty from under Europe’s feet, in Murray’s account, and then Darwin’s discoveries heightened the disorientation. Europeans next tried to substitute totalistic ideology for religion, with catastrophic results.

Finally, after World War II, they settled on human rights as the central meaning of Europe. But since Europeans could no longer believe, these rights were cut off from one of their main wellsprings: the Judeo-Christian tradition. The Catholic Church—having circumscribed the power of earthly kings across centuries and thereby “injected an anti-totalitarian vaccine into the European bloodstream,” as George Weigel has written in these pages–was scorned or ignored. Europeans forgot how they came to be free.

Somehow Europe must recover its vitality. But how? Murray is torn. On one hand, he sees how a rights-based civilization needs a theological frame, lest it succumb before a virile and energetic civilization like Islam. On the other, he thinks the leap of faith is impossible today. Murray can’t blame François, the professor-protagonist of Michel Houellebecq’s 2016 novel Submission. Faced with an Islamic takeover of France, François heads to a monastery desperate to shake his spiritual torpor. But kneeling before the Virgin doesn’t do anything for him. Islam, with its simplicity and practicality (not least the offer of up to four nubile wives), is much harder to resist.

Murray wonders whether the answer lies in art. Maybe in beauty Europeans can recover the fulfillment and sense of mystery that their ancestors once found in liturgy–only without the cosmic truth claims. He laments that contemporary European art has “given up that desire to connect us to something like the spirit of religion,” though it is possible that the current period of crisis will engender a revival. In the meanwhile, Murray has suggested, even nonbelievers should go to church as a way to mark and show gratitude for Christianity’s foundational role in Europe.

He is onto something. Figure out the identity bit in the book’s subtitle—“Immigration, Identity, Islam”—and the other two will prove much easier to sort out. 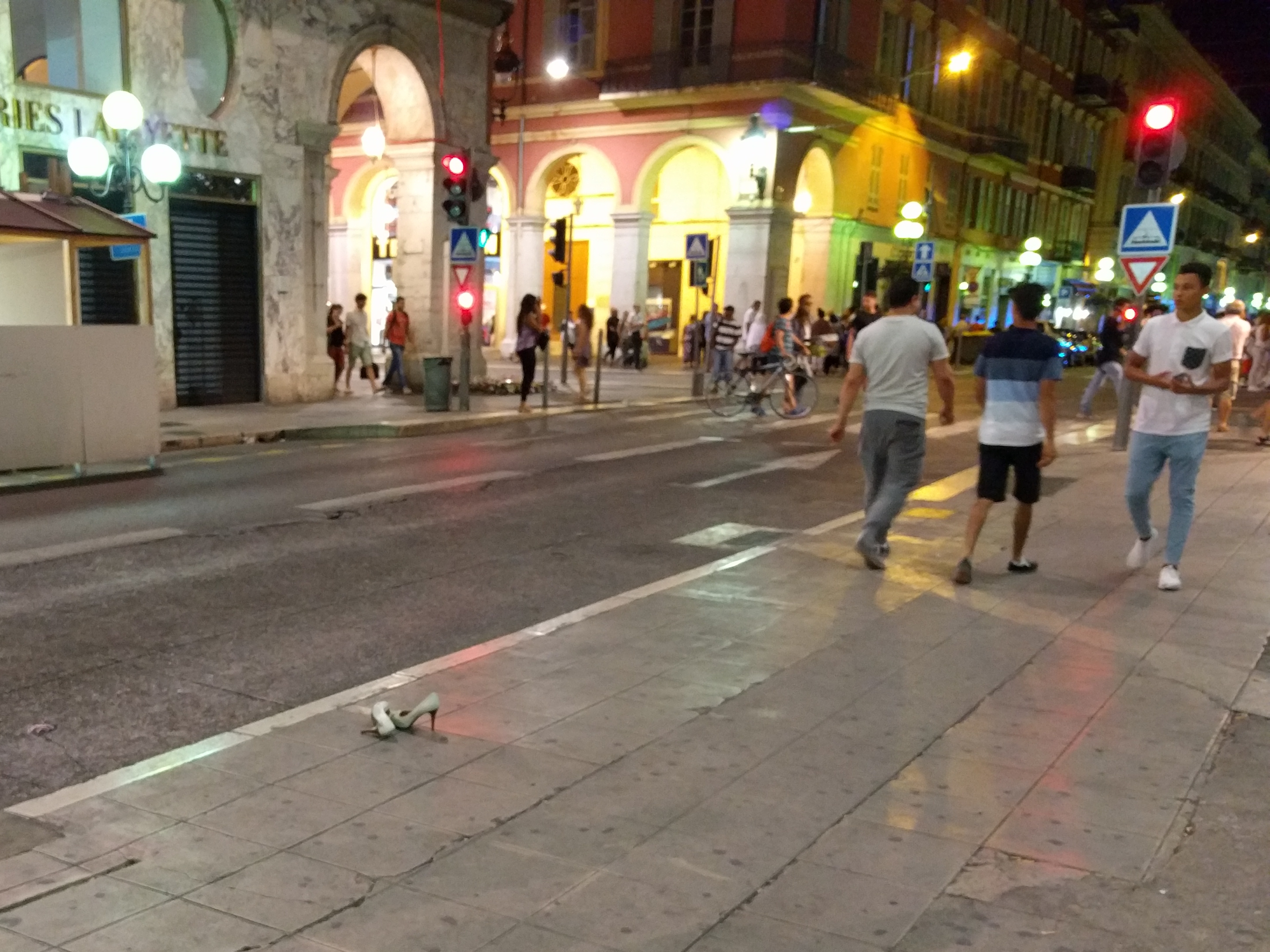