If Barack Obama was “The First Jewish President,” according to one magazine, or “such a traditional Jew sometimes” to another, then Supreme Court Justice Neil Gorsuch might be our country’s chief rabbi. Yes, he is an Episcopalian who likes to fish and raise animals in rural Colorado, but such a designation seems apt in light of his new book, A Republic, If You Can Keep It. Throughout the collection of speeches, judicial opinions, and short musings on the American way of life, Gorsuch returns to the centrality of a particular notion of justice that exemplifies the Mosaic Law in a manner unusual for a high-ranking figure in American public life.

A Republic, If You Can Keep It is an extended exhortation of the American people, and it announces as much with its title. In citing Benjamin Franklin’s characterization of the new form of government that he and the Founders had created, Gorsuch reminds us to appreciate and uphold the best of our republican tradition.

First and foremost among our responsibilities is preserving the Constitution’s quietly radical conception of justice, a principle that arises whether Gorsuch is promoting originalism, textualism, republican virtue, judicial restraint, or Lincolnian brotherhood. To understand what it is, let us define what it is not: Justice is not a pretext for judges to rule in favor of the most sympathetic party or the best-liked, which is why forms of restraint such as originalism, by which Gorsuch says “everyone gets the benefit of the written law’s terms,” are so crucial.

Justice is not, pointedly, uplifting the downtrodden or humbling the wealthy and powerful.

What, then, is it? Gorsuch explains it this way: “The least powerful among us get the same treatment as the most powerful” if the Constitution is understood properly. “All litigants, whether popular or reviled, will receive equal protection under law and due process for their grievances.”

This vision is akin to a bedrock principle throughout the Bible, part of what made it radical in its time and what places it at the heart of Western civilization. It is crystallized in Leviticus 19: “You shall do no unrighteousness in judgment: You shall not favor the poor nor disfavor the mighty, but with justice shall you judge your fellow.” It is no stray verse. It is echoed throughout biblical discussions of the law, in stark contrast to the “unequal weights” the Israelites were commanded to reject. “Justice, justice shall you pursue,” Deuteronomy reminds us—not the preferential treatment of wounded or needy or suffering groups.

The creed Gorsuch shares with the Bible is what he calls having the “judicial courage” to rule in accordance with what the law demands, rather than with the party the judge prefers. Gorsuch praises “self-restraint in the exercise of power,” or fealty to the law in the face of great pressure to favor one side of a dispute, as the highest form of courage.

The model here is Gorsuch’s 19th-century predecessor John Marshall Harlan, the “Great Dissenter” who rejected the Court’s infamous separate-but-equal decision in Plessy v. Ferguson (1896). Justice Harlan appealed to a higher law, insisting that the Constitution itself is “color-blind, and neither knows nor tolerates classes among citizens.” The law is a human instantiation reflecting a truth under God, that “the humblest is the peer of the most powerful.”

Harlan and Gorsuch share a view of justice with ancient Mosaic roots that today seems supremely radical. It is a humble yet devastating indictment of the injustice of social-justice movements that they regard certain individuals, by virtue of the circumstances of their birth, as moral creditors or debtors, and explicitly reject Justice Harlan’s color-blindness as yet another form of racism. Our nation’s law schools are teeming with professors and eager future litigators bound up in the cause of social equality, ready to bring down the mighty—white, male, heterosexual, cisgender, have your pick—while raising up the lowly and oppressed. That may or may not be a noble and valuable goal, Justice Gorsuch may concede, but it is not justice.

Keeping a republic entails constant and careful maintenance of more than justice alone. Our form of self-rule requires judges and citizens alike to be dedicated to protecting individual rights and mindful of our obligations to be virtuous, civil, and honest.

It is impossible not to read this work of inspiration as a subtle defense against the attacks Senate Democrats leveled against then–Judge Gorsuch during his confirmation hearings in 2017. They slammed Gorsuch for having ruled in a 2016 dissent against a truck driver who was fired after disobeying company orders that put him at risk for hypothermia. Gorsuch wrote in that case that the plain reading of the federal labor law under dispute did not forbid the company from firing the “frozen trucker,” as the case came to be known.

While some judges determined that “refusing to operate a vehicle” included “choosing to operate a vehicle,” Gorsuch could not abide rewriting the text of the statute. It was an awkward show of “judicial courage,” but a correct one nonetheless. “It might be fair to ask whether TransAm’s decision was a wise or kind one,” Gorsuch wrote in his dissent. “But it’s not our job to answer questions like that. Our only task is to decide whether the decision was an illegal one.”

For his textualist orthodoxy, Gorsuch was derided for being colder than the trucker’s frozen brakes, and Senator Chuck Schumer said that the case proved that Gorsuch “prefers CEOs over truck drivers, executives over employers, and corporations over consumers.”

It’s a sad but familiar state of affairs. The Senate minority leader either did not understand a judge’s job—to interpret the law neutrally—or thought that his constituents were not clever enough to understand the distinction. The soon-thereafter-confirmed justice now presents a pithy defense of his approach: “Rules of grammar play no favorites.” If you do not uphold the law as written, you are not taking it seriously. Gorsuch shows persuasively why an outcome such as the fired frozen trucker is the right judicial decision, though it may be unfortunate and a bit nasty on the company’s part.

On his defenses of the building blocks of a fair and free society the book succeeds. But Gorsuch falters by refusing to take up important aspects of the current debate over judicial activism. A controversy is raging now within conservative legal circles over the question of “judicial engagement.” This is the notion that an active judiciary can and should invalidate democratically passed laws that may trample unwritten liberties found in the Constitution or its amendments. Many conservatives argue against engagement, decrying it as a form of improper judicial activism, preferring instead “judicial restraint” that defers to legislatures in most instances.

Ought a judge be vigilant in the pursuit of liberty, or respect the equally important principle of republican rule? Justice Clarence Thomas has written that there are “founding principles” formed by the Declaration of Independence and the Constitution, such as “equality and liberty,” that ought to shape our thinking above and beyond constitutional interpretation. These are unavoidable questions for the modern judge, questions that cleave originalists into multiple camps, and Gorsuch leaves the expectant reader squinting for insights into how he goes about approaching them.

Still, there is little doubt that Justice Gorsuch will be a stalwart defender of justice in the biblical sense during his tenure on the high court, which alone is enough to celebrate. And though his book is at times unsatisfactory to the reader seeking insights into a great legal mind, it is a clear and quietly countercultural call-to-arms in the defense of our best republican virtues. 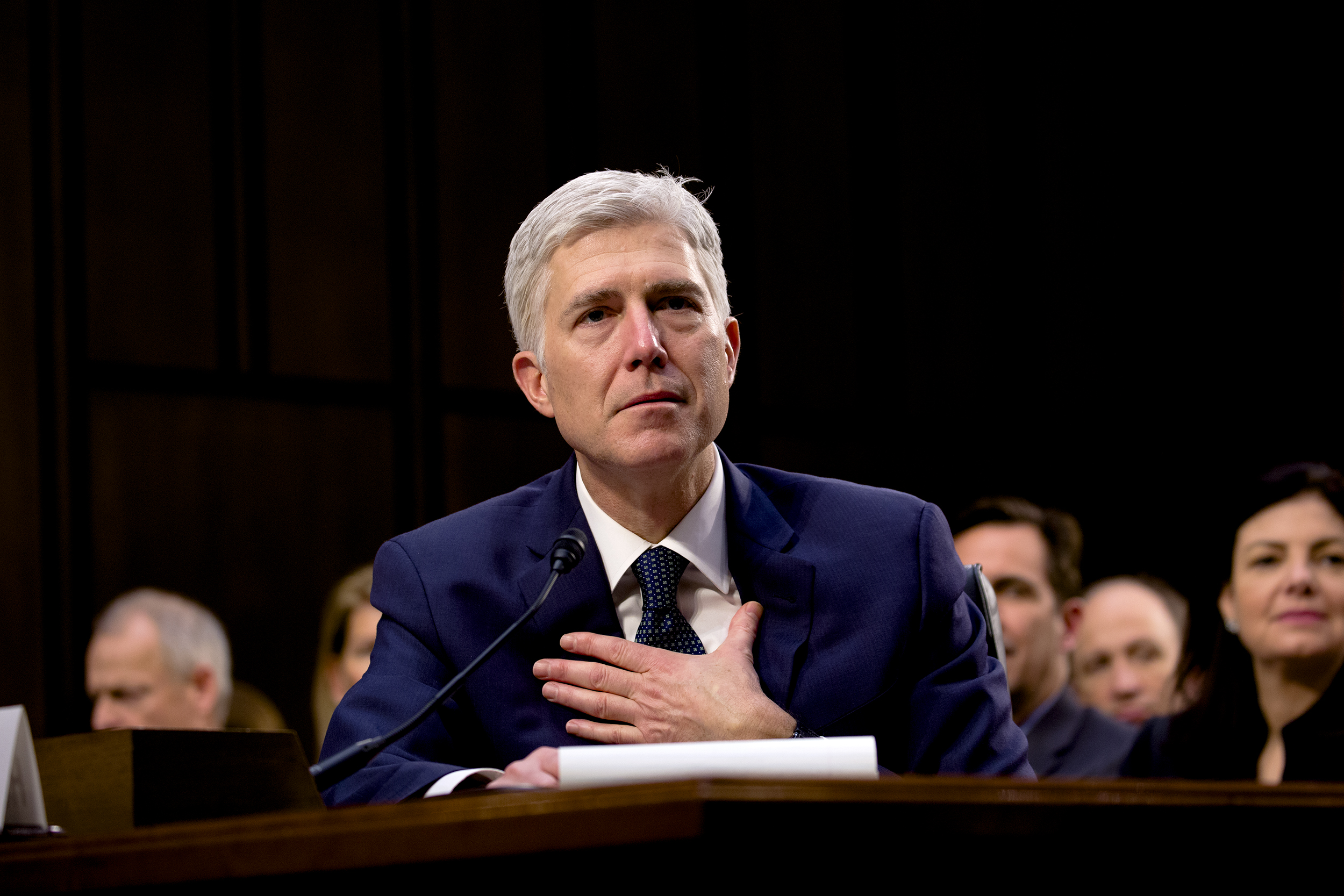