From Rodgers and Hammerstein to Stephen Sondheim, virtually all of the great pre-rock Broadway song-
writers were first- and second-generation Jews who were either born in New York or grew up there. None was observant, but they were all very much aware of their Jewish roots. Cole Porter was a rare exception to this rule. Like his admiring friend Irving Berlin, he wrote both the words and the music to his songs, but the two men had nothing else in common. Berlin had been born in the Pale of Settlement. Porter was the only child of a wealthy family of WASPs from Indiana and was groomed by his father to be a lawyer. But he studied music at Yale and decided to become a professional songwriter instead.

Porter wrote his first hit tune in 1919 and his first hit musical in 1928, and from then until 1958, when he stopped composing, he had astonishing success, writing scores for stage stars such as Fred Astaire, Mary Martin, and Ethel Merman and contributing songs to such movies as Born to Dance, Broadway Melody of 1940, and High Society. And while only one of Porter’s Broadway musicals, Kiss Me, Kate (1948), has held the stage in its original form, his songs were performed and recorded by every major pop singer of his time.

He became sufficiently famous that Hollywood made him the subject of a successful biopic, Night and Day (1946), in which he was played by Cary Grant. The heavily fictionalized screenplay, however, never so much as hinted at the fact that its subject, though married and by most accounts devoted in his way to his wife Linda, was a homosexual. Nor did Porter resemble Grant physically: A small, slicked-down dandy, he was physically unprepossessing, often resorting to male prostitutes from Harlem to satisfy his promiscuous urges.  Moreover, a 1937 accident damaged his legs so severely that he could no longer walk more than a few steps unaided.

While Porter never hinted other than obliquely in his work at any gnawing dissatisfaction with the glamorous life he led, his best ballads are self-evidently the work of a man consumed by the need for physical passion (“Night and day under the hide of me / There’s an, oh, such a hungry yearning burning inside of me”) and haunted by the dream of romantic longing (“You’d be so nice, you’d be paradise / To come home to and love”). Stephen Sondheim was surely on to something when he observed that “Porter’s characters were all aspects of Cole Porter, or at least his public image: the worldly cosmopolitan with an aching heart.” Broadway has never had a wittier songwriter or one capable of deeper feeling, and the songs he left behind stand as a permanent monument to his inspired craftsmanship.

The same cannot, alas, be said of his correspondence, which has now been collected in a compendium called The Letters of Cole Porter.1 Copiously edited by Cliff Eisen and Dominic McHugh, this hefty volume contains all of Porter’s extant correspondence, together with a selection of letters to and about Porter and excerpts from press stories and reviews. On occasion the results are illuminating: We note how Porter adopts an unabashedly campy tone when writing to his gay friends, recommending to one of them The City and the Pillar, Gore Vidal’s 1948 homosexual novel, and dryly remarking that “certainly the author knows his subject.” But as a whole, the letters prove to be of no literary interest whatsoever, and they are a chore to get through. In the end, it is his songs that offer the truest record of his fascinating and tortured inner life.

The least revealing of Porter’s songs are perhaps the ones most beloved of American songbook fan—his comic numbers. Many of them are “list songs,” a genre he is believed to have invented, in which he shows off his uncanny facility for wordplay. Porter’s verbal dexterity is so seemingly effortless that it is possible for his double and triple rhymes and impeccable prosody to go all but unnoticed:

Others, like “Anything Goes,” are sexually suggestive to the point of outright raciness:

But Porter also wrote equally convincing ballads about romantic love in which his well-developed gifts as a tunesmith came to the fore. Thanks to his classical training, he was able to write long, unbroken arcs of melody that undid the straitjacket of the 32-bar AABA form in which most golden-age pop songs are written. The most spectacular example is “Begin the Beguine,” which is 108 bars long and has, in Porter’s words, “one theme of 16 bars repeated endlessly and then finished off with a new theme which is repeated twice.” Even in his more conventionally structured tunes, Porter liked the sound of surprise. In “Night and Day,” the verse alternates between just two notes, followed by a low-lying, rhythmically sinuous chorus whose climax, an unexpected upward spiral, ends on the song’s last and highest note: “And its torment won’t be through / Till you let me spend my life making love to you / Day and night, night and day.”

Another of Porter’s songwriting fingerprints is hinted at in a remark he made to Richard Rodgers when he claimed to have discovered “the secret of writing hits…I’ll write Jewish tunes.” Porter almost certainly had in mind his marked propensity to fluctuate at will be-tween major and minor modes, a familiar characteristic of Jewish folk music. “I Love Paris,” for instance, begins in the minor key, then shifts to major with the suddenness of a sunrise as the singer explains that he loves Paris “every moment…because my love is near.”

Porter often used this device to give a dark tinge to his ballads. He was not, like Lorenz Hart, a bard of confessional despair, and his lyrics do not have any strong poetic quality, unlike those of Johnny Mercer or Oscar Hammerstein—he is more like Ira Gershwin in that respect. But still, Porter was exceptionally good at writing about lost or frustrated love. One need not assume that he had in mind his own inability to settle down with a permanent male partner to be struck by the melancholy of songs like “Ev’ry Time We Say Goodbye,” whose lyrics make explicit mention of the “change from major to minor” that can also be heard in the melody:

WHATEVER Porter’s songs tell us about his inner life, they contain no discernable trace of the disaster that came close to ending his career. In 1937, he was riding on Long Island when his horse lost its footing, fell beneath him, and rolled over, crushing his legs and causing extensive nerve damage to the right one. His doctors initially thought that it would be necessary to amputate both limbs, but his pride kept him from submitting to a procedure that would turn him (as he put it) into “only half a man.”

For the next 21 years, Porter suffered from debilitating pain in his right leg, which he nicknamed “Geraldine” and described as “a hellion, a bitch, a psychopath.” During that time, he underwent 34 operations. Yet he continued to produce songs of undiminished brilliance—he actually claimed to have written part of “At Long Last Love” while waiting for help to arrive after his accident—and in 1948 he wrote the finest of all his shows, Kiss Me, Kate.

Porter had no talent for dramatic construction and took no interest in intervening in the flyweight plots of his earlier shows, which (with the exception of the much-revised Anything Goes) are unrevivable for that reason. “My great professional tragedy,” he said in 1939, “is that I have to be a book hunter.” But the success of Oklahoma! in 1943 inspired him to try his hand at a fully integrated school-of-Hammerstein show, and when Bella Spewack suggested that he collaborate on a backstage musical about a production of The Taming of the Shrew, Porter agreed enthusiastically. The result was a show in which Shakespeare and Spewack are entwined with supreme ingenuity, and Porter’s songs, many of which incorporate lines from the play, are no less ingenious: “Where is the life that late I led? / Where is it now? Totally dead.”

Unlike his other musicals, Kiss Me, Kate has always been universally admired—Evelyn Waugh went to see it several times, and W.H. Auden thought it superior to The Taming of the Shrew. Porter, inspired by its artistic and popular success, went on to write three more Broadway shows, a made-for-TV musical, and the score for High Society, a 1956 film musical based on The Philadelphia Story and starring Bing Crosby, Grace Kelly, and Frank Sinatra. But the death in 1954 of his wife, a longtime sufferer from emphysema, was a brutal blow to his spirits, and though he coped stoically with his own suffering, his condition continued to deteriorate inexorably. Surviving kinescopes of his rare TV appearances in the ’50s show both that he needed the support of others to stand and that his face was lined with the marks of pain.

By 1958, Porter was left with no choice but to have his right leg amputated, and his creative impulse promptly dried up. He never wrote another song, and though he lived on until 1964, he hid himself from the outside world in his luxurious Waldorf Towers suite, receiving scarcely any guests and saying little to the few who were permitted to visit him. “It was sad seeing him depressed, knowing in your heart that he no longer wanted to live,” Ethel Merman remembered.

It is all the more extraordinary in retrospect that Porter was able to maintain for so long the creative energy and joie de vivre that he poured into his songs, much less that he wrote his greatest musical more than a decade after his accident. How he managed it was a secret he took to the grave, but that he did so is a matter of record. Irving Berlin once paraphrased one of his own lyrics in a fan letter he sent to Porter: “Anything I can do,” Berlin wrote, “you can do better.”

1 Yale, 672 pages.
2 Porter made commercial recordings of both songs in 1934, accompanying himself on the piano. They can be heard on YouTube. 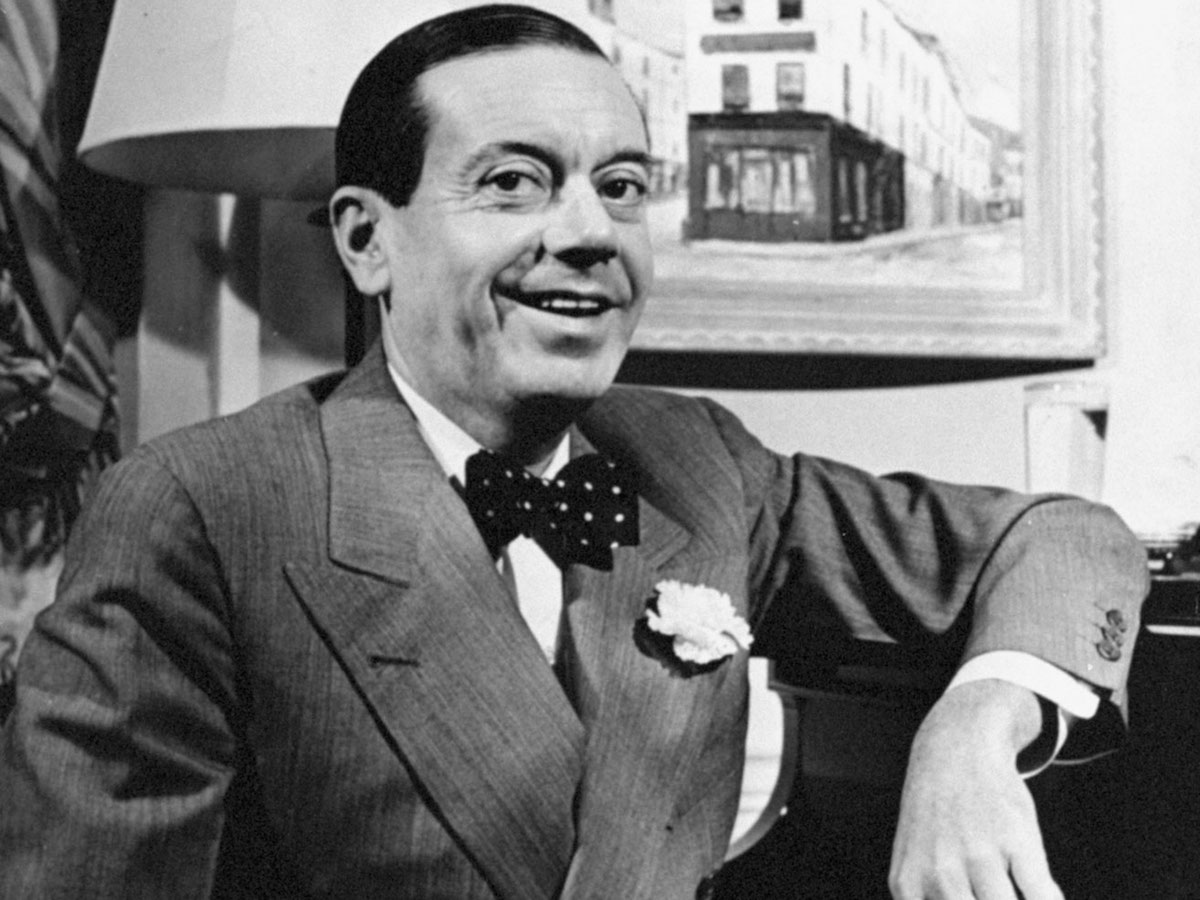