In 1944, the director Billy Wilder and the mystery novelist Raymond Chandler co-wrote a screen version of Double Indemnity, James M. Cain’s 1936 novella about an insurance agent who has an affair with the wife of one of his customers, then conspires with her to murder him for profit. One of the outstanding American films of the 20th century, Double Indemnity spawned film noir, the genre whose quintessential examples are moral tales about well-intentioned but fatally flawed men who are seduced from the path of righteousness, usually by shopworn but sexually alluring women, and commit crimes that lead inexorably to their death or imprisonment.

The mass popularity of so dark a film as Double Indemnity was all the more striking in light of the fact that it was released just one month after D-Day, a moment when most Hollywood movies continued to embody the smiling optimism of wartime propaganda. When American servicemen came home from the war, they proved eager to see other films that portrayed the country in a way consistent with the still-raw horrors of the brutal conflict they had survived. By the early ’50s, these violent stories of urban crime and corruption, shot on tight budgets that forced their makers to innovate instead of spending money on stars and sets, ranked among America’s most popular movies.

With the subsequent decline of the studio system and the resulting disappearance of the low-budget “B” studio “programmer,” the good cheer of the Eisenhower era started setting the tone for Hollywood in the ’50s. Fewer film noirs were made, and the last one of any consequence, Orson Welles’s Touch of Evil, came out in 1958. But when the national mood soured in the early 1970s, film noir returned with a vengeance. The signature noir film of the time is Roman Polanski’s Chinatown (1974), a detective story that is rooted both in its own moment, Los Angeles in 1974, and the time and place, Los Angeles in 1937, that it portrays.

A private investigator who specializes in divorce cases, Jake Gittes (Jack Nicholson) falls in love with a wealthy client (Faye Dunaway) and is promptly swept up in a scandal that threatens to implicate one of Los Angeles’s richest and most powerful businessmen (John Huston). Nicholson’s Jake Gittes is a cynic who affects the breezy manner of a Vietnam-era hipster and is no better than he has to be, and we see the radically corrupt Los Angeles of the ’30s through his modern eyes. Even though he lives in a world that is infinitely far removed from our own, Jake sees, and speaks, for us.

The result is a still-vital movie that shares with Francis Ford Coppola’s first two Godfather films (1972 and 1974) an ahistorical immediacy that contrasts sharply with its closely observed period setting. In this respect, Chinatown also resembles such similarly dark neo-noir films of the ’70s as Arthur Penn’s Night Moves (1975) and Martin Scorsese’s Taxi Driver (1976). We feel no distance from the tragic plight of Jake, who discovers to his horror at film’s end that, in the words of Robert Towne, the author of the screenplay of Chinatown, “there are some crimes for which you get punished, and there are some crimes that our society isn’t equipped to punish, and so we reward the criminals.”

IT IS a film that merits book-length consideration, and Sam Wasson’s The Big Goodbye: Chinatown and the Last Years of Hollywood is mostly worthy of its subject.1 Despite a mushy prologue, Wasson chronicles the making of Chinatown with clarity and intelligence and shows how it marked not the beginning but the end of a brief period of renewed creativity in Hollywood—one that led not to a renascent era of adult-oriented American film production but to the triumph of big-budget “franchise” films that, like Jaws (1975) and Star Wars (1977), were aimed at young audiences and have since come to dominate big-screen filmmaking.

By far the best thing about The Big Goodbye is the great care Wasson has taken to disentangle the various contributions made to Chinatown by Polanski, Towne, and Robert Evans, the film’s producer. For Chinatown is one of those movies made in so indissolubly collective a way as to make it impossible to ascribe principal creative credit to any one of its makers. A “masterpiece without a master,” Chinatown gives the lie to the “auteur” theory of film, which mistakenly contended that the director was always the primary creative force in studio-system movies.2

And yet it is also true that Polanski’s contribution to Chinatown was comparable in significance to that of Orson Welles to Citizen Kane. While he did not write the screenplay, it was his ruthlessly linear textual editing that turned Towne’s evocative but unfocused first draft into a tautly organized script. Towne, it turns out, had envisioned Chinatown as a more Chandleresque film, not exactly nostalgic but far more redolent of the lost city whose passing Raymond Chandler had mourned in The Little Sister: “Los Angeles was just a big dry sunny place with ugly homes and no style, but goodhearted and peaceful….People used to sleep out on porches. Little groups who thought they were intellectual used to call it the Athens of America. It wasn’t that, but it wasn’t a neon-lighted slum either.”

Big money changed all that. Noah Cross, the tycoon played with horrific panache by Huston, is a monster of appetite who has come to the realization, as he explains to Jake, that “most people never have to face the fact that at the right time and the right place, they’re capable of anything.” His appetite for power has led him to seize control of the city’s water supply and to murder the husband of his daughter, Evelyn Mulwray (played by Dunaway) when his son-in-law threatens to expose Cross. It also led him to rape and impregnate Evelyn when she was 15 years old, and she is desperately seeking to shield her sister-daughter from the scandal that would consume them both if Cross’s appalling predations were ever to become public.

Evelyn is not, in other words, a typical film-noir anti-heroine. Far from wanting to destroy Jake, she loves him, and even though he is coarse-spirited and seemingly soulless, he unexpectedly finds himself regenerated by her love. And unlike most film-noir protagonists, he makes the right moral choice, which is to protect Evelyn and her daughter from Noah Cross—yet the choice leads to disaster and death as surely as the wrong one would have. Hence the iron dramatic necessity for Evelyn to die a senseless death in the last scene instead of escaping with her daughter, as Towne had intended.

Polanski, whose own life had been smashed to pieces five years earlier by the similarly senseless murder of his young wife, Sharon Tate, was insistent that it was Cross who should “get away clean, just like most bad guys really do,” and his wishes prevailed. As the end titles roll, Jake is standing in the middle of Los Angeles’s Chinatown, alone with his blasted hopes. “Forget it, Jake, it’s Chinatown,” a friend tells him.

Hence, too, the importance of Robert Evans’s key artistic contribution to Chinatown, which was to jettison Phillip Lambro’s dissonant musical score at the last possible minute and replace it with a new score written in 10 short days by Jerry Goldsmith. Evans had sensed that the film’s climactic descent into unfathomable darkness would be unendurable unless the score first gave Chinatown a romantic aspect, telling Goldsmith that what he sought was a quality present in the trumpeter Bunny Berigan’s gentle 1937 recording of “I Can’t Get Started.”

Goldsmith responded by rescoring the film for a highly unorthodox instrumental lineup: one trumpet, four pianos, four harps, two percussionists, and a string section. At first glance, it looks like the kind of ensemble from which you’d expect to hear a piece of avant-garde classical music, and some parts of Goldsmith’s score are indeed quite joltingly modern-sounding. But the film opens with an elegiac yet sensuous trumpet solo that floats freely over a cushion of tolling harps and brooding strings, a “love theme” that evokes the doomed romance of Jake and Evelyn while hinting at its ultimate impossibility.3

The result was a film that, like Double Indemnity before it, was shut out of the Oscars—it won only a single prize, for Towne’s screenplay, with The Godfather Part II claiming most of that year’s major awards—but is now generally acknowledged as one of the finest American movies of its period.

HOW GOOD, though, is Chinatown? If we call it “great,” what do we mean by that loaded word? John Simon wrote admiringly of the film at the time of its release, but he also offered this thoughtful caveat about the critical standards against which a film like Chinatown deserves to be measured:

The final question is whether a mystery film, however concerned with moral climate and psychological overtones, can transcend its genre….These people are much more vulnerable than their genre antecedents, which is what ultimately makes for Chinatown’s originality and distinction. Still, the hold of the genre is so strong that, even with sensational plot twists kept at a minimum, there simply isn’t room enough for full character development—for the richer humanity required by art.

It is a fair question, perhaps the most relevant one that can be asked about a genre movie: Exactly how good can such films be? That Chinatown offers a serious commentary on the way we live now is not to be doubted—but is it “serious” in the same way as a truly classic film like, say, Citizen Kane or The Rules of the Game? Perhaps. Nothing happens in Chinatown, after all, at which the snobbish skeptic can point and say “this is false and shallow,” nor is the film self-conscious in any way. Least of all is it a Quentin Tarantino–style pastiche: One comes away from Chinatown as one comes away from a first-rate Western like Budd Boetticher’s Seven Men from Now or John Ford’s The Searchers, believing absolutely in the possible reality of its characters and their fate.

The passage of time has told us something else important about Chinatown, which is that it can be viewed time and again without losing any of its emotional force. Forty-five years after its release, we are still watching and talking about Chinatown, just as we are about The Searchers—or Double Indemnity, for that matter. To be sure, we are also talking about Jaws and Star Wars, but not in anything like the same way. I can’t help but wonder: Will anyone still be watching and talking that way about Pulp Fiction in 2039?

1 Flatiron Books, 416 pages
2 See my “‘Masterpieces’ Without Masters” (Commentary, July/August 2016).
3 Uan Rasey, the celebrated Hollywood studio trumpeter who is heard on the soundtrack of Chinatown, explained that Arthur Morton, Goldsmith’s arranger, had “told me to play it sexy—but like it’s not good sex!”. 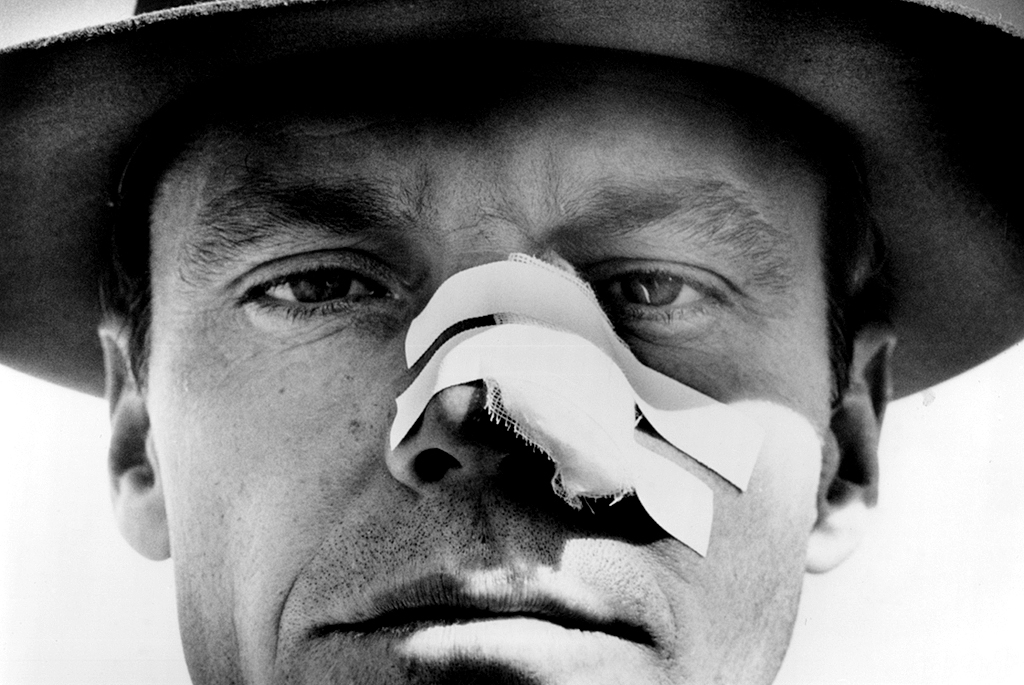