hirty-eight shows ran on Broadway during the first week of 2016, the best-attended week in the history of American theater. Twenty-six of them, including 19 of the 20 top-grossing productions, were musicals. Even though the musical is currently weathering a creative crisis of the first order, no other type of show is more central to the fiscal health of big-budget theater.

Mere artistic quality, however, is not central to the commercial success of musicals, be they new shows or revivals. The list of top-grossing Broadway shows included Hamilton, the best-reviewed musical of the decade, and Lincoln Center Theater’s production of The King and I, one of the half-dozen best musicals of the 20th century—but it also included such banal jukebox and commodity shows as Beautiful and Kinky Boots. Other factors, then, help determine whether or not the public will embrace a musical. But what are they?

Jack Viertel is the creative director of Jujamcyn Theaters and the artistic director of City Center’s “Encores!” series of semi-staged productions of classic musicals (from which the 1975 show Chicago emerged in revival in 1996 and has remained on Broadway ever since, with 8,000 performances to its credit and no end in sight). He doubles as an instructor at New York University, where he teaches classes in the dramatic architecture of the golden-age musical. Now Viertel has written a book called The Secret Life of the American Musical: How Broadway Shows Are Built.1 In it he explains how successful musicals are put together—and why most of today’s hit shows follow the same structural “rules” as the hits of the ’40s and ’50s.

Viertel’s book is not a work of criticism. His purpose is not to declare certain musicals better than others but to explain the popular appeal of hit shows. And while theatrical professionals will find little in The Secret Life of the American Musical that they did not already know, Viertel articulates his rules of commercial success so lucidly that even seasoned hands will come away with a clearer understanding of why some shows work while others flop.

Starting in the ’60s, a new generation of musical-comedy songwriters and librettists responded to America’s rising cultural turmoil by writing shows that sought to reflect more directly the changing world around them.


The “rules” of musical-comedy success were worked out by Oscar Hammerstein II, the author of the book and lyrics of Oklahoma! (1943, music by Richard Rodgers). Prior to Hammerstein, virtually all Broadway musicals had been boy-meets-girl romances with inconsequential plots. In Oklahoma! and, before it, Show Boat (1927, music by Jerome Kern), he raised the emotional stakes of the medium by writing libretti that connected his romantic plots to broader themes—miscegenation in Show Boat, American nationalism in Oklahoma! This gave his shows an expressive weight that made them stand out from more conventional fare. From then on, audiences came to expect musicals of like seriousness, and grew less willing to settle for pure fluff.

In addition, Hammerstein and his musical collaborators wrote songs of varied types that advanced the plots of their shows rather than serving as mere showcases for the performers. Other musical-comedy writers embraced their informal typology, which amounts to a working definition of the “classic” Broadway musical.
The most essential of these song types are:

• The opening number, which tells the audience what the show is about and how it will work, thereby creating dramatic expectations that are gradually fulfilled over the course of the evening. The locus classicus of the type is “Comedy Tonight,” from A Funny Thing Happened on the Way to the Forum (1962, songs by Stephen Sondheim, book by Larry Gelbart and Burt Shevelove), which explains that we will be seeing a farce in which love takes a back seat to buffoonery: “Nothing of gods,/Nothing of Fate,/Weighty affairs will just have to wait.”

In addition to setting the tone of the show, the opening number usually makes a preliminary statement of what is at stake for its central characters. In “Some People,” from Gypsy (1959, music by Jule Styne, lyrics by Sondheim, book by Arthur Laurents), we meet Mama Rose, a stage mother who lives vicariously through June, her daughter. We learn from the lyrics that Mama Rose will do all she possibly can to make June a vaudeville star, thereby establishing the premise of the show: “Some people can get a thrill/Knitting sweaters and sitting still—/That’s okay for some people/Who don’t know they’re alive.”

• The “I Want” song, in which the principal character tells the audience exactly what his goal is. While musicals like Gypsy and A Chorus Line (1975) open with such numbers, it is customary to have a separate “I Want” song a little later in the show, like “Wouldn’t It Be Loverly,” from My Fair Lady (1956, book and lyrics by Alan Jay Lerner, music by Frederick Loewe), which makes explicit the dramatic stake for Eliza Doolittle: “All I want is a room somewhere,/Far away from the cold night air.”

According to Viertel, the “I Want” song is essential to Hammerstein-style musicals: “The hero has to want something that’s hard to get, and go after it come what may. The sooner the audience understands this, the better.” If, on the other hand, the stakes are too low or ill-defined, the audience will not be engaged by the hero’s quest and the show will fail.

• The conditional love song, which describes the obstacles that stand in the way of the romantic union of the principal couple. The quintessential example—starting with the title—is “If I Loved You,” from Carousel (1945, music by Rodgers, book and lyrics by Hammerstein). These obstacles help to give a musical enough dramatic conflict to hold the audience’s attention.

• The “tent pole,” a first-act ensemble number that ramps up the energy level in preparation for intermission. While some tent-pole songs are production numbers in which the unfolding of the plot is suspended, the best ones are plot-driven. A case in point is “Tevye’s Dream,” from Fiddler on the Roof (1964, music by Jerry Bock, lyrics by Sheldon Harnick, book by Joseph Stein). It resolves a plot problem—Tevye must persuade Golde to let Tzeitel, their daughter, marry for love instead of money—while simultaneously delighting the audience.

• The first-act finale, in which the plot is unexpectedly complicated in a way whose resolution cannot be anticipated by the viewer, thus inducing him to come back after intermission. Once again, Gypsy supplies a choice example: June runs off with her boyfriend, and Mama Rose, instead of giving up on the act, decides instead to turn Louise, June’s shy sister, into the new star. After this surprise is detonated, Rose sings “Everything’s Coming Up Roses,” which appears to be rousing and optimistic but is in fact darkly ironic—an ideal way to ring down the curtain.

• The “11 o’clock number,” the second-act production number that is the centerpiece of a musical. It can be plot-driven, as is Jerome Robbins’s “Small House of Uncle Thomas” ballet in The King and I (1951, music by Rodgers, lyrics by Hammerstein), or a character-based show-stopper like “Sit Down, You’re Rockin’ the Boat,” from Guys and Dolls (1950, songs by Frank Loesser, book by Jo Swerling and Abe Burrows). While the 11 o’clock number is the climax of the show, it is not the denouement. That comes when the hero finally achieves his goal, usually in a succinctly written dialogue scene that “solves” the plot and leads directly into the finale.

Starting in the ’60s, a new generation of musical-comedy songwriters and librettists responded to America’s rising cultural turmoil by writing shows that sought to reflect more directly the changing world around them. Many, like Hair (1967), were loose-knit rock-and-roll musicals that abandoned the traditional methods of dramatic construction worked out by Hammerstein and his followers. Except for Hair, though, scarcely any of these musicals were commercially successful.

It was not until the turn of the 21st century that younger artists started writing shows whose contemporary settings and musical vocabulary were firmly rooted in Hammerstein’s time-tested song typology. According to Viertel, “most of the [musicals] that have experienced real lasting success in the years since the Golden Age of Broadway are, when the surface is scratched, deeply traditional and craftsmanlike.” While he makes mention of The Producers (2001), Hairspray (2002), Wicked (2003), and The Book of Mormon (2011), any number of other shows could be cited to prove his point.

A Hammerstein-style show need not look or sound like The King and I to be a hit: Hammerstein’s rules pertain to structure, not content. No matter how up-to-date the score and subject matter of a musical are, its chances of success on Broadway will be higher if its dramatic architecture is traditional. By the same token, loosely plotted postmodern rock musicals like Passing Strange (2008) and Bloody Bloody Andrew Jackson (2010), whatever their other virtues, are rarely attractive to those who go to Broadway in search of uncomplicated pleasure.

The popularity of Hamilton (2015, songs and book by Lin-Manuel Miranda), on the other hand, demonstrates the continuing validity of the Hammerstein style. As radically untraditional as it appears to be at first glance, this multicultural hip-hop musical about America’s Founding Fathers in fact hews closely—and profitably—to the book of rules that has spelled success on Broadway ever since Oklahoma! opened there 73 years ago.

Is it possible to write good musicals in other ways? Of course. Hammerstein’s “rules” are not iron laws, much less natural ones. The most common alternative approach to musical-comedy structure is what Viertel calls the “multiplot” show, of which A Chorus Line and Stephen Sondheim’s Into the Woods (1987) are exemplary. These shows portray interlocking events in a single community, shifting their dramatic focus from character to character instead of concentrating on the stars. But multiplot musicals rarely find commercial success, and those that do tend to stick fairly closely to Hammerstein’s song typology.

What is it about the Hammerstein style that has proved so attractive to musical-comedy writers of all kinds? The answer would seem to be that it constitutes the fullest possible embodiment of Jack Viertel’s capsule summary of what Broadway audiences look for in a show: “Audiences really do like to be told a definite story in a compelling way. It has to have captivating characters, an exciting challenge for them to solve, and a solution that’s worthy of the time we’ve taken to watch it.”

In short, it is, like the mystery novel and the three-camera TV situation comedy, an efficient and reliable way of amusing large numbers of ordinary people—but one that, in the hands of inspired craftsmen, can also be used to create enduringly beautiful popular art. 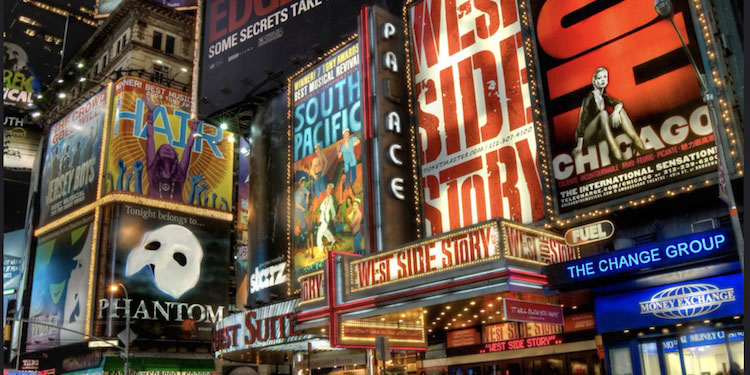