ast summer, my aunt came to New York from Europe to visit her goddaughter, who had just moved to New York City with her husband. I asked the young, well-educated European couple where they were living. “Brooklyn,” was the response. Not surprising. Then I asked where in Brooklyn. “Crown Heights,” they said excitedly.

The neighborhood of Crown Heights is notable for its dark place in recent history: It was the scene of the 1991 riots that led to the murder of a young rabbinical scholar named Yankel Rosenbaum. Tensions between the neighborhood’s Orthodox Jews and blacks exploded into a near-pogrom that seemed to have risen almost organically out of a city that was awash in racial strife and suffering through more than 2,000 murders a year.

Not in The New Brooklyn—the subject and title of Kay Hymowitz’s new book, which expertly lays out the rapid changes this famous borough has experienced in recent decades. Its subtitle could easily have been “From The Honeymooners to Welcome Back, Kotter to Girls,” to show how Brooklyn evolved over the past 70 years from a relatively stable blue-collar community to a gritty post-industrial streetscape wracked with racial hostility to its current incarnation as a mecca for young hipsters and the affluent upper middle class.

Hymowitz, who has lived in Brooklyn since 1982, traces the borough’s history from its early agricultural days to its industrial heyday when breweries, sugar refineries, and a bustling waterfront provided ample blue-collar jobs for its residents. Brooklyn’s fortunes began to decline in the years following World War II. Deindustrialization and suburbanization eroded the borough’s vitality; between 1950 and 1980, Brooklyn lost almost 20 percent of its population. The famed Brooklyn Navy Yards finally closed in the 1960s, and violent crime skyrocketed.

The rebirth of New York City—from the nadir of the 1975 fiscal crisis to the remarkable decrease in crime and increase in livability that began in the 1990s—is one of the great success stories of recent American history. New York slowly gained population in the 1980s, thanks to the Wall Street boom under Ronald Reagan and the fiscal stability brought about under Mayor Ed Koch. Young professionals began to seek out urban neighborhoods rather than suburbs; they had to contend with crime, drugs, and general disorder. By the late 1990s, under the political leadership of Rudy Giuliani, the city rebounded. Crime dropped to record lows, spurring more tourism, more business investment and development, and a booming population.

As Manhattan real estate became more expensive, people began to migrate to Brooklyn. Park Slope, where Hymowitz lives, had fallen on hard times starting in the 1920s but now is home to a rarefied landed class. Millennials began to gentrify other Brooklyn neighborhoods, such as Williamsburg. As crime declined, even previously sketchy places like Bushwick and Bedford-Stuyvesant began to attract young professionals eager for urban living who had since been priced out of…Park Slope. Brooklyn’s population increased by 20 percent between its low point in 1980 and 2015 (although it’s still below its 1950 peak), while private-sector jobs have increased by almost 20 percent since 2003.

With a journalist’s eye and policy wonk’s understanding of what makes cities work, Hymowitz leads readers on a whirlwind tour of contemporary Brooklyn. She is a booster of the new Brooklyn but is also able to see her home with a clear eye. She hails the creative energies of today’s Brooklyn and the subsequent gentrification that is revitalizing neglected neighborhoods. She lauds new immigrants, such as the Chinese who are transforming the borough. Her book portrays the New York/Brooklyn revival as a classic case of creative destruction. The process creates winners and losers, yet Hymowitz understands that change is a constant and maintaining the status quo is a recipe for stagnation. Yes, New York has become spectacularly expensive and has therefore driven out people of modest means. But if you want inexpensive, there is always Cleveland or Detroit.

The stately brownstones of Park Slope are the epitome of urban upper-middle-class life, while Williamsburg’s “creative class” has made the neighborhood and the borough synonymous with hip. Hymowitz tours the new Brooklyn Navy Yards, where the city leases space to some 330 entrepreneurial small manufacturers that employ some 7,000 workers. We see Bedford-Stuyvesant, which is being slowly gentrified by both white and black professionals, while neighboring Brownsville, home to what Hymowitz calls a “permanent ghetto” for African Americans, remains as yet untouched by the changes that have transformed the city.

Chinese immigrants have turned sleepy Sunset Park into the city’s largest Chinatown. Hymowitz describes how Chinese parents work long hours in menial jobs and pour their energies into the education of their children. Upward mobility for many of these families is still a reality. As the Chinese move into the middle class, they are moving to Bensonhurst, which until recently was a solidly Italian-American enclave.

A similar change has taken hold of Canarsie, formerly a neighborhood of Italians and Jews at the far eastern end of the borough a world away from Williamsburg. (Starbucks founder Howard Schultz grew up there.) In 1990, Canarsie was 75 percent white; today it is 85 percent black. The ability to become first-time homeowners has attracted large numbers of West Indian blacks. “Like the Chinese of Sunset Park,” writes Hymowitz of the family-oriented West Indians, “they are loaded with immigrant grit and confidence in their children’s future in America.” Yet Hymowitz is less optimistic about their future, due to the poor record of Canarsie schools. The graduation rate at Canarsie High School has declined in recent years from 57 percent to 42 percent.

There is one glaring omission in Hymowitz’s book: She offers little discussion of Orthodox Jews. Predominant in places like Williamsburg, Crown Heights, and Borough Park, large Orthodox families are remaking the borough. A 2012 study found 40 percent of Jewish New Yorkers identified as Orthodox, while 74 percent of Jewish children are Orthodox. The four groups that will likely define the future of Brooklyn (and the entire city) will be white professionals, black Caribbeans, Chinese, and Orthodox Jews.

The new Brooklyn is a metaphor for the larger changes that are affecting American society. The highly educated upper middle class who have benefitted most from the post-industrial knowledge-based economy are doing well and growing. The middle class is shrinking, priced out of the real-estate market and looking for more affordable places to live and raise a family. Too many African Americans are still trapped in multigenerational poverty. Meanwhile new immigrant groups are hoping to create their own version of the American Dream.

Politically, Brooklyn is a poster child for the Democratic Party’s so-called coalition of the ascendant. It is filled with liberal whites with advanced degrees, millennials, African Americans, and new immigrants. It represents the oddity of the Democrats’ current “top-down” coalition of the affluent, the poor, and the nonwhite. Our most liberal cities, such as New York, Boston, and San Francisco, are also the most unequal, with an “hourglass” economy that has little room for the middle class. And it seems that the more unequal these cities get, the more liberal they become. One has to wonder what glue will hold together this political coalition over the long run.

Ironically, the neighborhoods that provided the votes for Koch, Giuliani, and to a lesser extent Michael Bloomberg—the mayors who saved and solidified the city—are shrinking. A new Giuliani would have a hard time getting elected mayor today. The older white ethnic, middle- to working-class neighborhoods are faint ghosts, as their residents move away or die. Their old neighborhoods are either gentrifying or transforming into new ethnic neighborhoods. Nationally, the white working class was pivotal to Trump’s election; in Brooklyn, such voters are harder and harder to find. Ronald Reagan won a respectable 38 percent of the vote in heavily Democratic Brooklyn in 1980 and 1984. Mitt Romney and Donald Trump won only 17 percent.

Key to the future of New York and Brooklyn are its immigrant communities. Ethnic enclaves are not a new feature to the city, and assimilation is a generations-long process. But there has always been a broader civic culture that helped define the city and bring disparate groups together. Political machines, the Catholic Church, labor unions, and civic associations all helped create that culture. Much of that is weakened or gone, and questions remain about the extent of the political incorporation of ethnic communities and immigrants. At the top end, New York’s business elite is even more global in its focus and less interested in city affairs, while young hipsters also remained unengaged. What this portends for the city’s future is unclear, but at present New York is left with the dreary leftist politics of Bill de Blasio and his allies on the City Council.

Despite the economic gains and rise of new businesses, it is also not entirely clear whether the New Brooklyn can create enough jobs to sustain not just the gentrifying elite, but the middle and working classes as well. Education is key to the long-term stability of the city, both in terms of retaining a middle class and giving poor and immigrant children the necessary skills that will allow them to climb the socioeconomic ladder. While some education reforms under Giuliani and Bloomberg have been successful, the city’s public-school system still underperforms.

The question at the heart of The New Brooklyn is: How do we create middle-class Americans? Can society provide enough jobs so that average citizens can raise families and enjoy a life of moderate economic and social security? Urban areas like Brooklyn used to be incubators of the middle class, taking children and grandchildren of immigrant stock and lifting them up. The New Brooklyn is certainly a vast improvement over what the city had been only a few decades earlier. But whether Brooklyn, or America, can accomplish this again on a large scale in the 21st century is very much an open question. 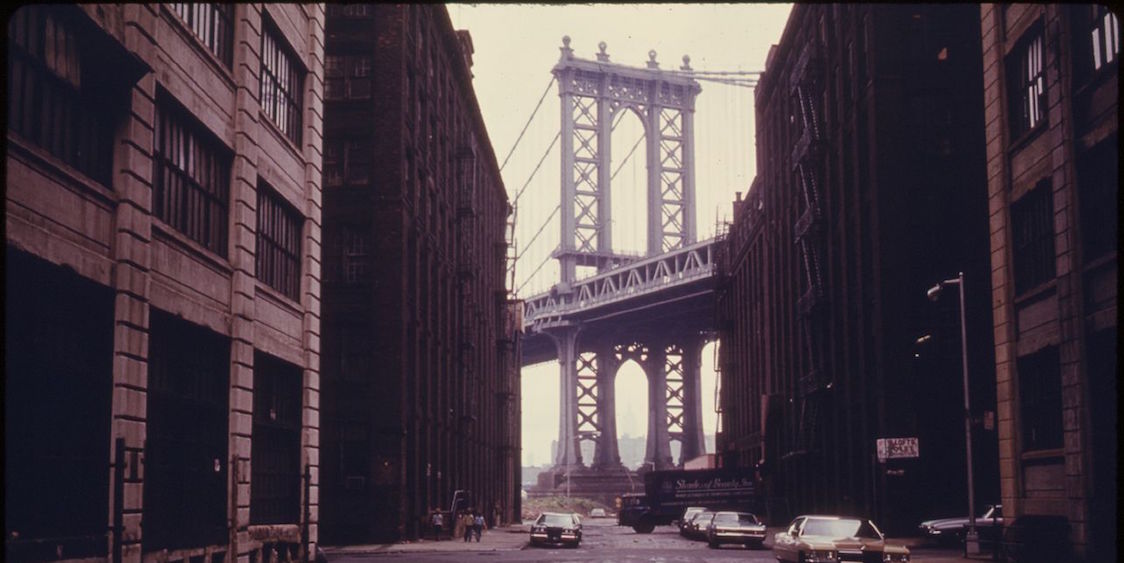 Vincent J. Cannato, associate professor of history at the University of Massachusetts Boston, is the author of, among other works, The Ungovernable City: John Lindsay and His Struggle to Save New York.