This is, effectively, the question New York City mayor Bill de Blasio is mulling after the School Diversity Advisory Group he convened issued its recommendation to “stop using academic criteria to screen applicants for admission to public middle schools, and to phase out elementary gifted-and-talented programs that now require a test,” as the Wall Street Journal reported.

All the city’s selective schools are already open to anyone regardless of race. But because the majority of students who gain admission to schools that screen applicants are white and Asian, the panel reasoned, merit-based admissions procedures must be racist. Indeed, the advisory panel describes merit-based testing and other screening procedures used in New York City’s public schools as “exclusionary admissions practices,” not because they found any evidence of racial bias in the screening procedures but simply because the outcome of screening does not perfectly reflect the demographic make-up of the city. According to the New York Times, the panel argued that a screening system based on academic ability “is not equitable, even if it is effective for some.”

The Progressive Caucus of the city council agrees. In a letter to the diversity panel, it urged “caps on the allowable concentrations of high-achieving and low-achieving students in the same schools.” New York City schools chancellor Richard Carranza, who would implement the panel’s recommendations if the mayor approves them, already thinks too many students are labeled “gifted.”

In other words, the progressives’ answer to the problem of racial gaps in educational achievement is a Harrison Bergeron-like downward social leveling that would ensure that excellence and competition are eliminated in favor of mediocrity and “diversity.” Since more than half of the city’s public school students can’t pass the state math and English exams, and only 28 percent of the city’s black students passed the math exam (compared to 67 percent of white students and 74 percent of Asian-American students), the leveling effect will likely be significant.

Punishing excellence by demanding that everyone conform to the lowest common denominator is a recipe for educational failure and societal stagnation. By this logic, schools will eventually have to eliminate grades and other forms of ranking, since outcomes will never match progressives’ diversity requirements.

Of course, this and other attempts to champion diversity over achievement overlook a glaring and uncomfortable fact: most of the highest-achieving students who gain entry to these screened schools are minority students. They are just not the “right” minority. Many are Asian-Americans, a number of whom are the children of lower-income parents and immigrants.

These students consistently outperform their peers on entrance tests for selective schools. They do so not because they are wealthy (most are not) but because of a strong cultural commitment to educational achievement and family-wide effort to support their children’s education. Their success should be held up as a model for others, not attacked as evidence of racial bias.

Even if you agree with the city’s diversity panel that the outcome of the school’s selective system is unfair, a school system that promoted a culture of achievement would want to broaden gifted and talented programs to schools where they don’t now exist and integrate them into every neighborhood school without sacrificing standards. A school system devoted to the optics of diversity—which, under de Blasio, New York City has become—would simply eliminate the bad optics (in this case, gifted and talented programs that require merit-based testing).

This might satisfy the city’s Democratic voters in the short term, but it won’t work in the long-term because it overlooks some uncomfortable realities. Forcing high-achieving, well-behaved students to take classes with their low-achieving, badly behaved peers for the vague goal of achieving “diversity” punishes students who are there to learn. It is also harmful (and deeply condescending) to assume that all students, regardless of race, cannot meet high educational and behavioral standards.

Schools can’t solve all the problems that kids bring with them into the classroom. Many studies have shown how the academic achievement gap begins long before formal schooling starts. It also does not address the problem of differences in social and emotional learning and behavior in school. Black and Hispanic students are disciplined at far higher rates than white or Asian students in the New York public school system. Like the academic achievement gap, the reasons for this disparity are complicated and cannot be explained away by citing racism as a theory of everything. Numerous studies of school discipline across the country have found differences in the number of infractions committed by students based on race, for example. Socio-economic factors and family instability clearly come into play as well. Eliminating merit-based schools will do nothing to solve these stubborn problems.

As well, all of this diversity-signaling only distracts from the much larger problem that more than half of New York City’s public school students can’t read or do math at grade level. Rather than convening feel-good diversity panels and punishing high-achieving students (many of whom are the children of hard-working immigrants), why not devote resources to improving the quality of education across the system?

That, of course, would require far greater effort (and a commitment to wrangle the teachers’ union) than identity politics pandering. But any reforms to the city’s education system won’t impact de Blasio’s kids; his daughter graduated years ago from one of the top public high schools in New York, and his son graduated from Brooklyn Tech in 2015. Later, as a Yale undergraduate, de Blasio’s son complained that his elite high school was racist and called for an end to merit-based admissions in New York City public schools like the one he benefited from attending.

Worse, the country’s largest urban school system will have made a mockery of the ideal of equality of opportunity, sanctimoniously wrapping itself in diversity rhetoric while purposefully punishing Asian-American and white students. And by embracing mediocrity over excellence, it will do so at the expense of the students it purports to want to help. 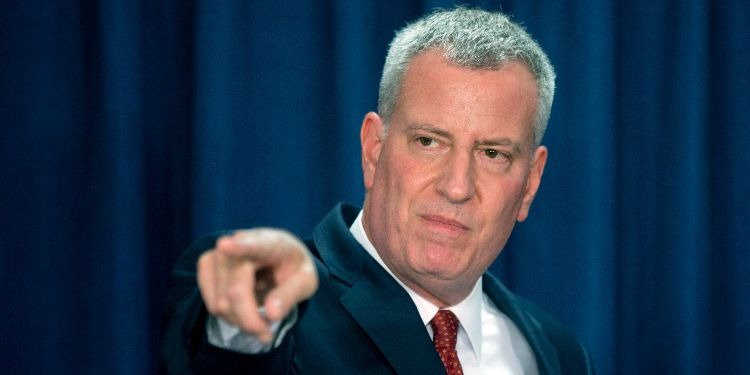