It’s become commonplace on the left in recent years to declare that democracy is in peril, and, not surprisingly, to argue that the only way to save it is to pass a Democratic-approved policy agenda.

But if democracy is in peril, how do you explain the results of this week’s school board recall election in San Francisco? One of the country’s most liberal cities voted in a landslide to oust three of the board’s most outspoken progressive members: its chair, Gabriela Lopez, along with Alison Collins (best known for posting hateful anti-Asian remarks on Twitter) and Faauuga Moliga. Even the New York Times described it as a “landslide,” and noted that the turnout among Asian-American voters in the city was notably higher than in previous elections.

San Francisco’s public schools were among the last in the nation to reopen after going virtual during the pandemic. Yet the school board spent more than a year making little effort to reopen safely or help students suffering serious learning loss. Instead, they dithered over renaming Abraham Lincoln high school and attempted to destroy competitive, admissions-only public high schools like Lowell High School—all in the name of “equity.”

The voters responded with an unequivocal rebuke.

What’s notable about this election is that it can’t be explained away as a typical right-left culture war; it was a Democratic mini-civil war. San Francisco is a deep-blue city and most of the organizers of the recall effort (like those hoping to oust San Francisco District Attorney Chesa Boudin in a recall election this June) are card-carrying Democrats themselves.

These reluctant activists were clearly unwilling to tolerate officials who put progressive ideology ahead of the basic responsibilities of their office. “It’s the people rising up in revolt in San Francisco and saying it’s unacceptable to abandon your responsibility to educate our children,” Siva Raj, a San Francisco parent of public-school students who helped organize the recall effort, told the Times. Another recall activist, Autumn Looijen, told Politico, “If you want to rename 44 schools, that’s great — but please make sure the kids inside those walls can read. If you want to change the admission system to bring in more people of color, then that’s great — but do it in a way that brings the community together rather than dividing us.”

The San Francisco recall election sent a clear message, one that Democratic officials in other parts of the country ignore at their peril: Governance trumps ideology.

This would seem to be in keeping with the Democratic Party’s message. As the party’s website claims, Democrats are all about “rolling up our sleeves, empowering grassroots voters, and organizing everywhere to build back better.”

The problem for Democrats is that, of late, the sleeves they’ve rolled up are attached to the arms they’ve linked with elite, progressive ideologues whom they’ve let control the party’s direction. These ideologues live in the world of abstractions and “systemic” problems. They have never met a Diversity, Equity, and Inclusion initiative they don’t want to spend taxpayer money funding.

By contrast, parents live in the real world, where they notice when their children don’t know how to conjugate a verb or complete basic equations in math. Parents witnessed firsthand the inanity of seeing their school districts spending hundreds of thousands of dollars on the work of race grifters while their kids were forced to endure a substandard educational experience on Zoom.

San Francisco parents also know that the city’s school closures—like those in many heavily Democratic parts of the country—harmed poor and minority children disproportionately. Far from keeping children “safe” (they were already the lowest-risk population), school board policies exacerbated existing inequalities in ways that will be felt for decades to come.

San Francisco isn’t the only city where elected officials need reminding that the people give you the power to do the job of running an effective school system, not to use your elected office to impose your ideological views on parents and children. And it’s not the only Democratic stronghold where lockdowns (supported by teachers’ unions and the Democratic politicians beholden to them) exacted the worst damage on the most vulnerable children whom Democrats insist their policies are meant to help.

Many local Democratic voters suffering under the policies of progressive officials have had enough—not only of the malfeasance of the people running schools but also of officials who cater to the irrational fears of Covid hawks while ignoring everyday concerns like rising crime rates and inflation. With crime, in particular, many people who might eagerly have planted a Black Lives Matter sign on their lawn two years ago now understand that the concerns of law-abiding citizens are being ignored by elected Democrats. Rising rates of robbery, armed carjackings, and homicide are impossible to ignore. Telling someone who has had a gun shoved in her face that a good Democrat should support defunding the police and “decarceration” is not persuasive political messaging, as San Francisco’s Boudin might find out this summer.

Democrats can learn this lesson the easy way, by listening to the regular people, not the professional ideologues, in your party. Or you can learn it the hard way, with more frequent local recall elections and potentially brutal midterm elections this fall. Either way: Power to the people, right? 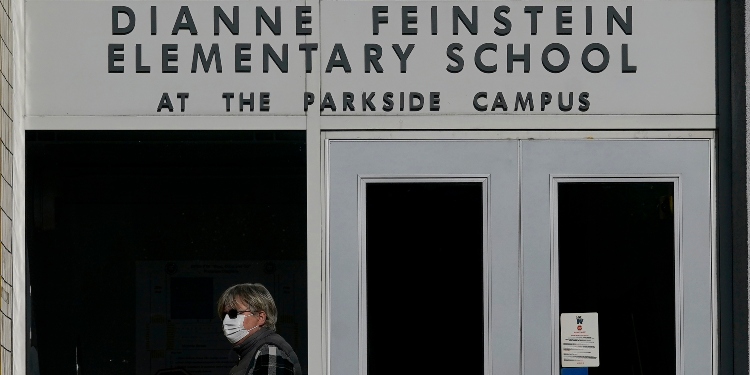