Many of the Democratic candidates vying for their party’s presidential nomination in 2020 have spoken balefully of “dark money”–a catch-all term that describes money spent on political activity by groups that are not required to disclose their donors.

Elizabeth Warren railed against billionaires and their “dark money” on the floor of the Senate in 2018. “One of the principal tools rich and powerful people use is dark money,” she said. “They have created an evasive enemy that slithers out of sight, with only a glimpse here or there . . . For decades, billionaires have been pouring unlimited, secret money into the hands of carefully picked candidates who will do their bidding.” And Bernie Sanders never misses an opportunity to boast about his small-dollar, grassroots donors.

Ever since the 2010 Citizens United case, where the Supreme Court ruled that political spending is a protected form of free speech under the First Amendment, the narrative about dark money has been highly partisan. Dark money is almost always portrayed as a weapon wielded by conservative billionaires at the expense of the little guy (and democracy). This was the story told in Jane Mayer’s hyperventilating opus, Dark Money, which made exaggerated claims about the philanthropic interests of libertarian and conservative billionaires while practically ignoring those of anyone on the left. Right-wing contributions were the theme of a recent dark money documentary as well.

But as NPR reported this week, “a recent study by the government reform group Issue One found that in the 2018 midterm elections, politically active tax-exempt groups spent about $150 million in secret money, and Democratic-leaning groups accounted for 54 [percent] of it.” One left-leaning group, Majority Forward, spent “one-third of all the secret money,” including, ironically, on ads denouncing dark money.

The left has been playing the dark money game for years but disclosing that didn’t suit the media narrative about big bad (Republican) billionaires. In 2012, ProPublica reported on elections in Montana where liberal activist groups funneled dark money into ads attacking the Republican candidate for U.S. Senate (there were plenty of dark-money ads funded by right-leaning groups as well). In 2016, Hillary Clinton’s campaign criticized Bernie Sanders for his hypocrisy in denouncing PAC and dark money while allowing groups like Friends of the Earth Action to fund ads touting Sanders’ environmental record. And, in 2018, the Brennan Center issued a report documenting dark money spending for candidates on both sides, including “progressive like campaign finance warrior Bernie Sanders.” For every Koch brother spending on conservative or libertarian issues, there’s a Tom Steyer or George Soros spending on liberal ones.

Until now, liberal groups have been portrayed as using dark money as a last resort, something they have to do to combat those big bad billionaires on the right. “We probably have a lot less comfort with some of the existing rules that allow for the Koch brothers to write unlimited checks to these groups,” Navin Nayak of the (liberal) League of Conservation Voters told ProPublica. “But as long as these are the rules, we’re certainly going do our best to make sure we’re competitive and that our candidates have a shot at winning. We’re certainly not going to cede the playing field to the Koch brothers.”

That narrative is impossible to sustain now. As Mark Riddle of Future Majority told NPR this week about his group’s use of dark money, “I have no misgivings . . . On election night 2018, I didn’t hear anybody go ‘Oh jeez, we won! But gosh, wasn’t all that stuff really bad that helped everybody win?” But isn’t that precisely what House Democrats said when they unveiled their first piece of legislation, the For the People Act (which, among other things, tries to limit the influence of dark money and PACs) when they took control of the House in January? The Democratic Party seems happy to look the other way as undisclosed contributions flow to left-leaning advocacy groups hostile to Republican candidates.

Enough with the moral preening, Democrats. If dark money is the danger to democracy that some people claim it is, then both parties are to blame for encouraging its use. The media narrative should reflect that reality rather than chasing conservative billionaire bogeymen. 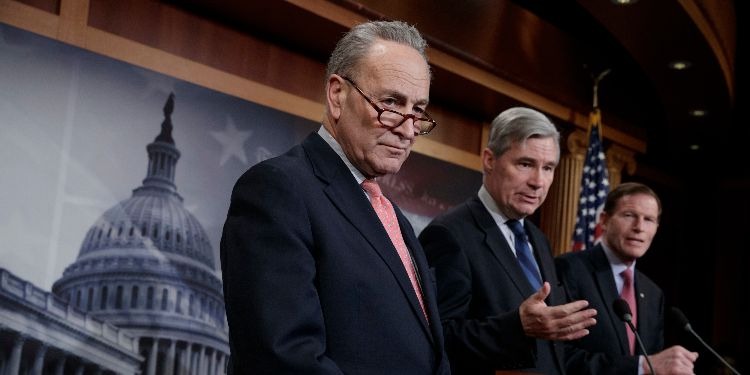