What does Elizabeth Warren think of men?

On the one hand, she obviously appreciates some men. The press loves to report on her happy second marriage and the many gushing remarks she makes about her husband, Bruce Mann (including stories about how he reorganized her closet as a surprise anniversary gift). She called Dwayne Johnson’s character on “Ballers” “eye candy” (a remark that, had it been made by Joe Biden about a female actress, would have been criticized by Warren and the media alike for its rank sexism).

On the other hand, men play starring roles as villains in many of her campaign stories: for example, the big bad male principal who supposedly “fired” her for becoming pregnant when she was a teacher (an untruthful claim that Warren has nevertheless continued to repeat).

In a lengthy profile in the Washington Post, we learn that, in 1997, Warren took the opportunity during a memorial service for the law professor who had first championed her career to tell stories about how he had chased her around his desk in his office and sexually harassed her. She did this in front of his children, colleagues, and friends, but it was deemed just fine by the Post since “Warren told the story in an entertaining way.” She has since trotted out the same story in an interview with “Meet the Press” as an example of her own #MeToo moment.

But at a recent CNN-sponsored town hall on LGBTQ issues, she let slip an emotion that she hasn’t previously shown toward men: contempt. Answering a question (which turned out to be planted) about how she would talk to someone who is opposed to gay marriage, Warren responded, “Well, I’m going to assume it’s a guy who said that.” She then added, “And I’m going to say, ‘Then just marry one woman—I’m cool with that.’” Then came her contemptuous “zinger”: “Assuming you can find one.” As the Washington Post described, “Warren turned, took a few steps and smiled broadly as the room exploded in laughter.” Soon her campaign team “was crowing that the clip had garnered more than 12 million views on Twitter.”

If this is what Warren’s campaign team thinks is worth crowing about, then they clearly haven’t learned anything since Hillary Clinton dismissed a large swath of the country as “deplorables.”

Casual misandry might play well on Twitter (and among the Democratic base), but it’s insulting to a large number of voters Warren will need to persuade in a general election if she secures the Democratic nomination.

In keeping with the gentle treatment Warren has experienced from the media, few mainstream outlets (with the exception of the Post) even bothered to question whether her remarks were offensive or point out the irony that she was calling out intolerance by being intolerant herself.

It’s not the first time Warren has been given a pass by the press, nor is it likely to be the last. In 2017, after Warren was rebuked by the Senate for deliberately flouting the chamber’s rules, she was deemed a hero by supporters. When Senate majority leader Mitch McConnell explained that he was compelled by procedural rules to rebuke Warren after she had persisted in ignoring them, the phrase, “Nevertheless, she persisted,” became a feminist rallying cry on social media.

It, too, assumed a certain hostility to half of the population—or at least the old, white part of it. As one Warren supporter tweeted, “‘Nevertheless, she persisted’ is the contemptible lament of every old white man who has tried and failed to silence an indomitable woman.” A feminist communications scholar argued, “Warren’s reputation as a progressive iconoclast makes her the most visible unruly political woman of the Trump era” who is “forging an intersectional coalition that threatens to upend the White male privilege that underlies the U.S. presidency and the Republican congressional majority.”

Writing in the American Prospect back in June, Robert Kuttner argued that, although Warren’s issues are “deeply and integrally feminist,” she doesn’t advertise herself “as Feminist with a capital-F.” He further noted, “As for men, the fact that she is not an in-your-face feminist but a champion of pocketbook populism will also wear well.” He predicts, “One day, in the not too far distant future, it will become increasingly evident to the skeptics that Warren is not only female, but feminist in the most powerful sense. And then get ready for one big bandwagon and a huge surge of turnout.”

Or not. As her scripted snark at the town hall suggests, what wears well with her progressive base won’t necessarily work with more moderate voters. The same is true for her policy proposals, for which she adamantly refuses to admit the cost. As last night’s debate revealed, even her fellow Democrats are beginning to ask tougher questions of Warren. As Reason’s Nick Gillespie recently noted, “ ‘Elizabeth Warren has a plan for you’ isn’t just a campaign slogan, it’s a threat.”

If Warren is looking for threats to her own viability as a candidate, rather than having her surrogates complain to a compliant media that it’s all sexism, she would do well to reconsider the message her seemingly innocuous joke last week was sending. Like many politicians, Warren uses her personal stories and personal history to try to connect with voters. By making half those voters the butt of a contemptuous joke, she signaled that not only does she place honesty about her personal history on a sliding scale, but the dignity of voters she dislikes as well. 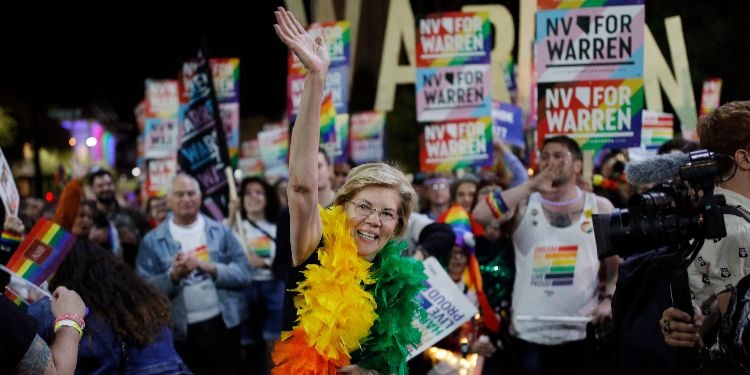