This year marks the 100th anniversary of the ratification of the 19th Amendment granting women the right to vote. In commemoration, President Donald Trump pardoned Susan B. Anthony, who was arrested in 1872 for illegally voting. Curiously, the move prompted liberal outrage.

New York Lieutenant Governor Kathy Hochul demanded that Trump rescind the pardon, the Susan B. Anthony Museum in Rochester, New York issued a statement announcing that it would be “rejecting” the pardon. “If one wants to honor Susan B. Anthony today, a clear stance against any form of voter suppression would be welcome,” the statement said, describing Anthony as someone who was a “strong proponent” of the “elimination of all forms of discrimination.”

Unfortunately for the docents at the museum, that’s not the narrative the left has been promoting for years about Anthony and other white suffragists. On the contrary, the New York Times recently described Anthony as “an increasingly divisive figure, adopted by anti-abortion forces and criticized for relating Black suffragists to the sidelines.”

The “criticism” the Times cites not surprisingly is coming from inside the Times building. The Times has waged a consistent campaign to chip away at the achievements of white suffragists by judging them by contemporary standards—a presentist assessment that renders the white suffragists irredeemably racist. A recent Times newsletter noted of the anniversary of the 19th amendment, “Those who fought for it were heroes, but not always moral paragons. The suffrage movement, like other social movements before and after, often reflected the racism, nativism and other prejudices that pervaded America as a whole.”

Times editorial board member Brent Staples was much less diplomatic when he began laying the groundwork for attacking white women’s rights leaders last year. “The suffragist heroes Elizabeth Cady Stanton and Susan B. Anthony seized control of the feminist narrative of the 19th century,” he wrote.

Stripped of her halo, Stanton, the campaign’s principal philosopher, is exposed as a classic liberal racist who embraced fairness in the abstract while publicly enunciating bigoted views of African-American men, whom she characterized as “Sambos” and incipient rapists in the period just after the war. The suffrage struggle itself took on a similar flavor, acquiescing to white supremacy — and selling out the interests of African-American women—when it became politically expedient to do so.

He went on to decry the “toxic legacy” of women’s suffrage and argues that “the betrayal of trust opened a rift between black and white feminists that persists to this day.”

If it persists to this day, it’s in large part because people like Staples have an interest in ensuring it does. He cites the work of historians like Faye Dudden, who argues that women like Stanton “dipped her pen into a tincture of white racism and sketched a reference to a nightmarish figure, the black rapist.” But this kind of presentism does little to place in context the complicated politics of the post-Civil War debate over universal suffrage.

Susan B. Anthony’s goal was women’s suffrage, and anything that stood in her way—including granting the right to vote to black men before it was granted to women—she condemned. “I will cut off this right arm of mine before I will ever work or demand the ballot for the Negro and not the woman,” Anthony said. She also invoked images of non-white men of all races as ignorant and unworthy of the vote. Such trafficking in stereotypes by today’s standards are clearly offensive and racist, but they were understood to be politically expedient by white suffragists at the time.

Focusing only on suffragists’ failures to adhere to contemporary views perpetuates a misunderstanding of the slow, painstaking, and necessary work that historians do. History is always being revised—as documents are unearthed and studied by new generations of historians, they raise new questions and bring new perspectives to old ones.

When done well, this form of revision expands our understanding of the past by enlarging it. Contra the complaints of opinion writers like Staples, historians have been doing this for years with regard to studying the contributions of black women who fought for the right to vote.

But just as the 1619 Project has as its goal erasing and replacing the story of our country’s founding with an ideological project, so, too, is this effort intended to weaken the impact of white suffragists by retroactively canceling them for their views during a time of present-day racial ferment.

This approach to studying the past is gaining power (the state of California recently passed a law mandating that every student in the California State University system must take an “ethnic studies” course to graduate). But to the extent that it views history as a racist conspiracy rather than a complicated tapestry, or as a game with winners and losers (and the losers are always figures that failed to live by contemporary standards of race, sex, or class), it contributes to confusion, not understanding.

When this happens, history ceases to be an ongoing, ever-evolving effort to understand people’s motivations and beliefs and actions in the past and instead becomes a contemporary project focused on retribution and erasure. Simplistic videos like this one get more engagement than nuanced analyses by historians. Judgments are often meted out not by scholars but by ideologically motivated journalists or, as we have seen of late, the mob (both virtual and real). Rather than enriching and expanding the complicated story of the past, we get history as the story of good vs. evil, black vs. white.

We all lose when such Manichean approaches to history prevail because its advocates have nothing to say about figures that complicate the narrative by being. . . well, complicated human beings. Where, for example, does Sojourner Truth fit into the story of white suffragists as irredeemably racist? She was a former slave and abolitionist who, like Anthony and Stanton (whom she called friends), split with Frederick Douglass over the issue of black men gaining the right to vote before women.

Historians should push back against this effort to replace the study of the past with presentist, ideological agendas. Each new generation of historians should seek to enrich and expand our knowledge of the past; replacing this kind of enlivening study of history with ideological and political expediency doesn’t only undermine our understanding of that past, but threatens to leave us far less prepared for the future. 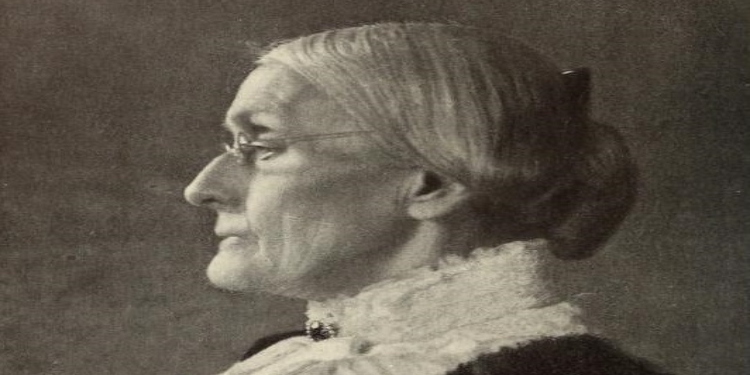