In the wake of Democrats’ election victories last week, most notably regaining control of the state of Virginia’s government for the first time in nearly a century, feminist activists have revived their push to ratify an Equal Rights Amendment to the Constitution.

As the New York Times reported, “Representative Jerrold Nadler, the New York Democrat who is chairman of the House Judiciary Committee, will announce that his panel intends to mark up a bill eliminating the deadline for states to adopt the amendment, known as the E.R.A., which was one state short of the 38 needed for ratification when the deadline passed in 1982.”

The amendment, “Equality of rights under the law shall not be denied or abridged by the United States or by any State on account of sex,” seems straightforward. Still, its likely impact and the process for ratifying it are anything but.

In fact, there are several legal and logistical hurdles the ERA’s proponents must tackle before the amendment could become part of the Constitution. Technically, there is no proposed amendment that Virginia could ratify because the deadline for ratification (originally set for 1979 and later extended to 1982 by Congress) has long since passed. Federal courts in the past have been asked to rule on the question of whether or not Congress had the power to extend the deadline in the first place, and the one court that did rule on it found the Congressional extension unconstitutional (the Supreme Court declared the issue moot since the 1982 deadline had already passed when the case came before the court).

As well, five of the states that had previously ratified the amendment later rescinded their ratification, something the current ERA activists have been curiously quiet about in their renewed push for ratification.

Even Justice Ruth Bader Ginsburg has suggested that a revived ERA would have to go through a new ratification process to be considered legitimate. She recently told students at Georgetown Law School, “I was a proponent of the equal rights amendment. I hope someday it will be put back in the political hopper and we’ll be starting over again collecting the necessary states to ratify it.”

Setting aside the tangle of logistical issues, a larger question looms: Why do we need the ERA now? Thanks to decades of court decisions (many the result of Ginsburg’s work as a lawyer in the 1970s), women have equal protection and equal opportunity in the eyes of the law. They have been outperforming men educationally for decades, and they are rising to the top of many fields and seeking elective office in higher numbers. What needs would a revived ERA meet?

Feminists have long viewed an ERA as a gateway drug for legally ensuring a host of progressive schemes that failed to pass constitutional muster in the past: feminists have for decades been using state Equal Rights Amendments to argue for “comparable worth” legislation that would benefit women in female-dominated professions, for example. Ratification of the ERA would surely prompt more aggressive efforts at such wage-setting at the federal level.

Feminists also see opportunities to use the ERA to argue for guaranteed federal and state funding of abortion. As the Times notes, Fatima Goss Graves, the president of the National Women’s Law Center, “said the amendment was the next frontier for women’s rights, as millions of women were speaking out about their experiences with sexual violence through the #MeToo movement, and activists had mobilized against abortion restrictions and around efforts to close the wage gap between men and women.”

But the larger question feminists will have to answer if ratification is to proceed is one that wasn’t at issue when the amendment was first proposed: how to define “sex.” Anti-ERA activist Phyllis Schlafly’s daughter, Anne Cori, who has taken up the mantle of fighting the revived ERA, told The Atlantic, “The ERA is not an amendment about women. It’s an amendment about sex . . . The ramifications of the ERA are different [now] because the definition of sex has changed.” She’s right. Supporters of the amendment haven’t answered some important questions: Does the word “sex” in the amendment now include sexual orientation? Where does the push for broader rights for transgender people fit into the amendment’s definition of “sex?”

Have feminist proponents of the ERA thought through the ways in which a ratified ERA might not suit the feminist agenda? Schlafly wasn’t wrong decades ago when she pointed out that the ERA could be interpreted to require women to register for the draft. What would an ERA mean for preferences and set-asides for women-owned businesses? Or for female-only clubs and colleges? The implementation of such a broadly worded amendment could very well lead to results feminists would not like.

Thus far, the push for an ERA has been couched in the gauzy overtones of history, with references to suffragists and claims that “women belong in the constitution” (even though the word “women” appears nowhere in the proposed amendment).

But some activists are more candid about why they want an ERA now. As Ian Millhiser argued in Vox, “The strongest case for ratifying the ERA . . .  is not that it will revolutionize American law now. Rather, it’s that it will insulate many existing protections against gender discrimination from an increasingly conservative Supreme Court in the coming years.” In other words, ERA supporters seem to think that a constitutional amendment whose impact would largely be symbolic is the right way to make an end-run around a rightward-leaning Supreme Court.

This embrace of symbolic gestures and progressive shibboleths about gender and race is precisely what Meghan Daum takes the feminist movement to task for in her sharp new collection of essays, The Problem With Everything. She describes a women’s movement that has been mugged by intersectionality, leaving thoughtful, old-school liberals like herself ideologically marooned and wondering what happened to their movement.

Hers is not exactly had a road to Damascus conversion to conservatism, but Daum’s willingness to challenge her own side’s inconsistencies have marked her as a heretic at a time when progressives are supposed to be falling into line to fight their common enemies.

“I supported social justice causes as much as the next self-respecting liberal,” Daum writes, “yet I was irritated by the smug vibe of many young activists within the new left,” whom she calls “the wokescenti.” Daum decries the “purity policing” and trampling of free speech among younger, fourth-wave feminists, and shows in compelling detail just how pernicious the influence of social media has been for this generation. “It feels like a feminism that has been preselected for mass consumption, distributed by social media algorithms, and, above all, brilliantly engineered to tap into our most narcissistic weaknesses while masquerading as strength.”

“This feminism doesn’t like my feminism,” she notes. But to her, the new feminism “looks like narcissism repackaged as revolution” and is less a movement than “a way of gesturing at being radical without really being radical at all.” She writes, “I’ll just say it. The pussy hats at the Women’s March made me cringe a little.”

And despite eagerly referring to themselves as “badasses” and “nasty women,” the new feminists are surprisingly fragile. They would rather wallow in grievance and victimhood and invoke intersectional ideology to justify their victimization. “I’m troubled by the ways in which contemporary feminism has turned womanhood into another kind of childhood,” Daum writes. As a result, difficult questions “that had once been treated as complicated inquiries were increasingly being reduced to moral absolutes” by the demands of intersectionality. Nuance has vanished, and thoughtful critics like Daum who have tried to restore it more often than not find themselves canceled.

No wonder feminists are demanding a symbolic gesture like a revived Equal Rights Amendment. Cancel culture, hashtag activism, and demands for intersectionality are much easier to perform than doing the difficult work of thoughtful, nuanced, liberal debate. 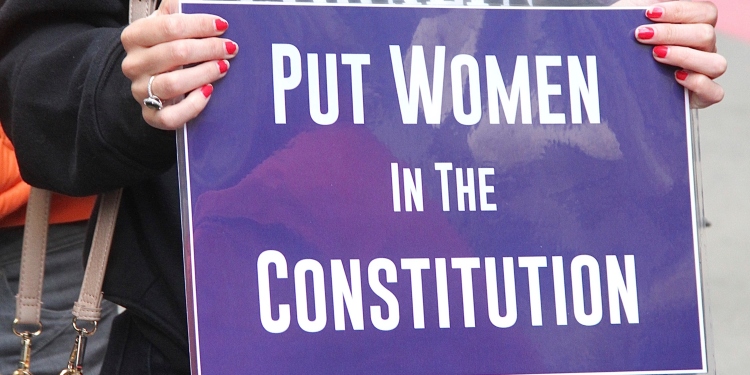