Among the many things President Trump could have chosen to emphasize during his address to the nation last night about the COVID-19 pandemic—but didn’t—is the meaning and importance of “social distancing.”

Anyone who studies pandemics will tell you that the earlier restrictions on large gatherings of people are put into place, the better our overall chances of slowing a pandemic’s spread. During the Spanish influenza epidemic of 1918, the city of Philadelphia refused to practice social distancing and continued allowing large gatherings, including a parade for the war effort, while other cities, like St. Louis, immediately closed schools and churches and limited public gatherings. A comparison of the death rates in both cities reveals just how effective social distancing policies can be.

Trump had an opportunity to both educate and reassure Americans about social distancing practices last night, but he chose instead to emphasize the foreignness of the virus’ origins and its spread in Europe (ignoring the fact that America’s rising rates of COVID transmission will soon look like Europe’s if we fail to take decisive preventive action).

But Trump isn’t the only one bungling the message about social distancing. Last night, the National Basketball Association abruptly canceled a game between the Utah Jazz and Oklahoma City Thunder just before tip-off while players were warming up on the court; the association then announced that the rest of the NBA season was canceled. (Jazz player Rudy Gobert has tested positive for the virus; days earlier he had jokingly downplayed the seriousness of COVID transmission by touching all of the microphones and surfaces at a press conference).

Why is it so important that the message about social distancing be conveyed clearly, seriously, and consistently to the public?

The last time many Americans heard about quarantine or epidemics was when they read about Typhoid Mary in a history textbook. The reason movies like “Contagion” and “Outbreak” and books like Stephen King’s “The Stand” have recaptured the public’s imagination in recent weeks is that we have little non-fictional experience with pandemics to draw upon.

As well, since the advent of social media, the meaning of the word “social” has been transformed (and in many ways, diluted). In one sense, our embrace of the word “social” to mean things we can do both online as well as offline—and the technologies that enable us to live this way—should make any edicts about social distancing less painful than they might have been in earlier eras. Thanks to the Internet, in the past few decades we’ve already seen declining levels of attendance at movie theaters and live concert performances, and a growing preference for online retail experiences.

Not surprisingly, some businesses have met the current challenge with new marketing strategies that embrace consumers’ anxieties: The &pizza chain of restaurants promotes “contactless delivery directions so you can keep your ‘social distance,’” and added a new tag line to its advertising: “Calm, informed, & together.” (For what it’s worth, this is also the company that is currently offering a $3 pizza to anyone who sends in misspellings from the president’s twitter feed within 90 seconds of Trump posting a tweet in a special offer they call #trumptypos). Other companies, like Chase Bank, are using COVID as a reason to urge customers to download the company’s app and do business virtually.

Adaptations like these are generally harmless and even weirdly reassuring. Even in the midst of a pandemic, capitalism is gonna capitalism. And a world where everything (even the Pope’s weekly Mass) can be live-streamed is one that, in theory, should be able to easily transition to doing things remotely through screens rather than in person.

But this overlooks the understandable emotional response to the pandemic. For years sociologists have warned about the fraying bonds of community—most notably Robert Putnam in Bowling Alone—and its cultural fallout. We have for the most part told ourselves that our technological innovations have merely transferred those communities to the Internet, where they continue to thrive, which is true up to a point.

But a real-world pandemic such as COVID reveals where our community bonds are weakest (and non-transferable to the online world) and where our trust has eroded. On the one hand, Twitter is flooded with friendly reminders to wash your hands. On the other, people are panic-buying toilet paper and canned goods. At a time of rapidly proliferating “known unknowns” about the virus we also have instantaneous communication via social media, the spread of misinformation online, and plenty of hucksters and propagandists eager to exploit this moment of crisis.

As well, Americans’ anxiety about COVID isn’t merely an understandable reaction to the seriousness of the pandemic. It is further evidence of the frayed bonds of trust we have in our institutions, particularly our belief in the competence and effectiveness of elected leaders in Congress and the president. We’re looking to institutions we don’t trust to answer questions for which no one has answers to ease the anxiety that is, in fact, a rational response to a moment like this.

As proudly individualistic as Americans are, we are also human beings. We crave community and belonging, especially during times of crisis. We saw this when the nation came together after the terrorist attacks on 9/11. A pandemic is different, because despite the misguided tone of President Trump’s remarks last night, a virus is not an “enemy” in the traditional sense, nor should we treat it like one. It’s a moment that calls on each of us to be willing to sacrifice some of the comforts and conveniences we take for granted, and to do so for the common good.

The mistrust and polarization and combativeness that has marked the American town square in recent years makes defining that common good and strengthening those common bonds even more of a challenge. While we should embrace recommendations for keeping space between us in the short term as a matter of civic responsibility, we should also start thinking about ways we can close those gaps once the pandemic has eased. 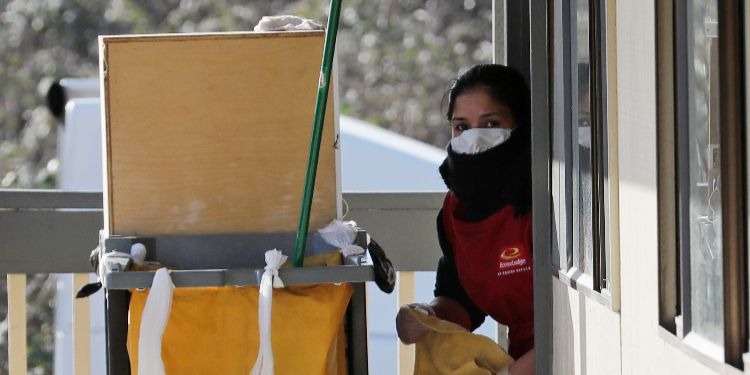