Over the weekend, former Vice President Joe Biden signaled that he is open to the idea of choosing a female running mate if he secures his party’s nomination for president.

Asked about potential running mates during a town hall meeting in Iowa, Biden initially acted cagey. “I could start naming people, but the press will think that’s who I picked,” he said, before suggesting “the former assistant attorney general who got fired” (Sally Yates), “the woman who should have been governor of Georgia” (Stacey Abrams), and “the two senators from the state of New Hampshire” (Jeanne Shaheen and Maggie Hassan).

This isn’t the first time Biden has hinted about his preferences for running mates. He told a group of black journalists back in August that he would prefer to have a running mate who wasn’t a white male, although at the time he added, “I’m not making that commitment until I know that the person I’m dealing with I can completely and thoroughly trust as authentic and on the same page [as me] . . . They’ve got to be simpatico with what I stand for and with what I want to get done.”

This is why his suggestion of Stacey Abrams, who arguably has the highest profile among the four women Biden floated as possibilities, is especially odd. Such a choice would create problems for Biden that he doesn’t need.

For one, by highlighting Abrams, he explicitly endorsed the continued Democratic fiction that the Georgia gubernatorial election she lost in 2018 was “stolen” from her because of voter fraud. Abrams has been unable to prove her claim (she lost by more than 56,000 votes in an election where voter turnout was high), but she did launch a PAC, Fair Fight, “after witnessing the gross mismanagement of the 2018 election” that has effectively kept her employed and in the public eye since her defeat.

Abrams is an odd choice for Biden for another reason: Biden is already under scrutiny for the perception that his son Hunter has engaged in corrupt (and personally enriching) deals thanks to his father’s influence. Why align himself with Abrams, who, despite having made herself a professional warrior against corruption, has been accused of dabbling in it herself?

A deep dive by the Atlanta Journal-Constitution into the finances of two non-profit organizations she created (Third Sector Development and the Voter Access Institute) before she ran for governor raised many questions about her use of funds. “Abrams won’t say where the money came from, even though the two foundations paid her, over three years, nearly half a million dollars,” the paper reported.

While Abrams’ fellow Democrats told the newspaper they were “underwhelmed” by her groups’ voter outreach efforts, enough questions were raised about the non-profits’ voter registration efforts to prompt complaints by the State Board of Elections and a criminal investigation into the activities of Abrams’ canvassers by the secretary of state. (Abrams wouldn’t talk to the AJC about their story, but she did complain to Glamour magazine that questions about the amount of money she took from her non-profits were sexist).

All of this has been glossed over by the cult of personality that’s developed around Abrams since she lost the governor’s race. But it’s one that Biden should avoid burnishing.

Then again, Biden is floating names of running mates at this point in his campaign for good reason. His campaign is worried about the lack of enthusiasm for him in Iowa, particularly among younger voters. And there are broader concerns among Democrats about the optics of a primary field dominated by two old white men (and one old white woman).

But Biden would do well to exercise caution in teasing potential running mates too soon. Biden often trades on his relationship with Obama as a selling point for his candidacy, telling USA Today, for example, “We were philosophically in agreement, and we strategically agreed on everything. We disagreed on tactics sometimes . . . We’ve had arguments, we’ve shouted at each other in private, but we always completely trusted each other.”

But as much as Biden likes to sell an idealized narrative about his relationship with Barack Obama, the real story—not the media-fueled bromance—was far more complicated. Biden was probably not Obama’s first choice (Obama reportedly told Sen. Tim Kaine, “you are the pick of my heart, but Joe is the pick of my head”).

In a Democratic primary field dominated by politicians whose views are to the left of the American public, Biden would do well to hew to his centrist line and choose rationally when it comes to a running mate. The progressive flank of his party, angry and dismissive of lifelong politicians like Biden, are unlikely to be assuaged if Biden chooses a progressive darling like Abrams for his vice president. And voters in 2020 will have plenty of legitimate questions about such a choice if he makes it. 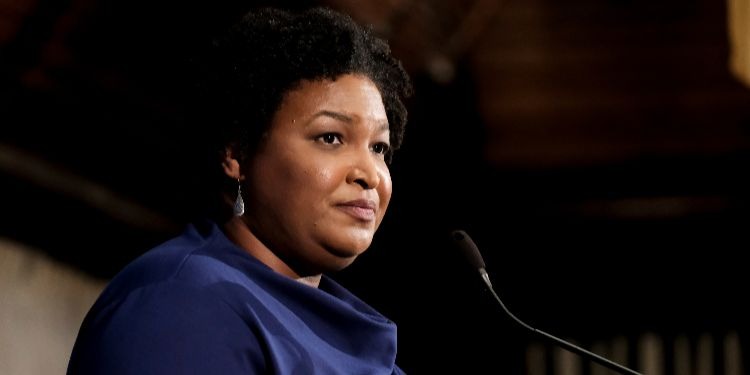