Nancy Pelosi announced this afternoon that she would move ahead with impeachment proceedings against President Donald Trump over claims that he withheld aid to Ukraine to extract damaging information about the business dealings of Joe Biden’s son, Hunter. A turf battle now looms over who will handle the inquiry.

According to the Washington Post, “Pelosi and top Democrats have been privately discussing the creation of a select committee to conduct the possible impeachment of Trump,” taking it out of the hands of the Rep. Jerry Nadler and the House Judiciary Committee, which has been investigating the administration, and allowing Pelosi to hand-pick the members she prefers to lead the effort (such as Rep. Adam Schiff).

This suggestion has drawn sharp complaints from progressives in the House. Rep. Alexandria Ocasio-Cortez, who suffers from the burden of constantly reminding us of her status as political ingenue, has suddenly discovered the benefits of the procedural rules she previously scorned. Ocasio-Cortez tweeted that Democrats “don’t have the luxury of time w/another committee . . . Judiciary has been investigating & putting the pieces together for months . . . Impeachment belongs there.”

But Pelosi would do well not to jettison her pragmatism entirely, even in the face of growing impatience among her caucus members. Impeaching a president who has been as consistent in his disregard of the rule of law and norms of the executive branch as he has been inconsistent in his policy prescriptions still carries risks for Democrats, particularly in the lead-up to a presidential election and a Republican-controlled Senate. For now, impeachment remains unpopular with the public.

Impeachment, by its nature, is meant to be a political procedure. Nevertheless, there are some things Pelosi and House Democrats can do to ensure that such a polarizing maneuver is handled with the seriousness it deserves and in a way that encourages the public to view it as legitimate.

Crucially, the House must be clear about what they are impeaching Trump for and not make an inquiry a free-for-all expression of Democrats’ Trump-hatred. As writers at Lawfare argue, the House “needs to resist the temptation to turn the impeachment process into an indiscriminate expression of any and all grievances. It must ground itself in the provable record. And it needs to make decisions about what message it wants to send about what presidential conduct a coordinate branch will brand as constitutionally intolerable in a person who swears the presidential oath of office.”

To that end, Pelosi would be wise to sideline members like AOC and the progressive “Squad,” whose views might be popular among a small segment of Democratic activists and others prone to Twitter-induced hyperbole but are far from representative of the American mainstream. Pelosi should also learn from the mistakes made during last week’s questioning of former Trump campaign manager Corey Lewandowski. Impeachment proceedings should be handled by competent lawyers, not grandstanding members of Congress.

Trump supporters will never acknowledge the legitimacy of an impeachment proceeding against the president, and Trump will no doubt use the House’s efforts to fuel his raging persecution complex. But Pelosi and whomever she chooses to lead impeachment have an opportunity to offer the public of an example of how our Constitutional system and governing norms ought to work —even as they investigate a president who has done little but flout them. 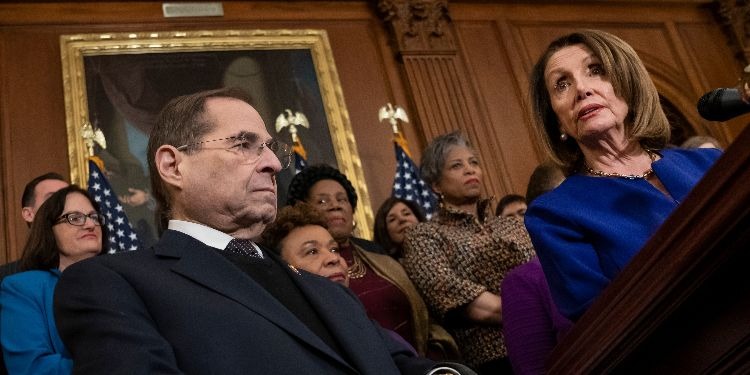