In late November, during a speech at the American Muslims for Palestine conference in Chicago, professional activist Linda Sarsour, now a national surrogate for Bernie Sanders’ presidential campaign, stated, “Israel was built on the idea that Jews are supreme to everybody else.” She continued: “How can you be against white supremacy in the United States of America and the idea of living in a supremacist state based on race and class, but then you support a state like Israel that is built on supremacy?”

If you’ve followed Sarsour’s career, you would know that such anti-Semitic statements are a regular feature of her “activism.”

Over the years, Sarsour has supported rabid anti-Semite and Nation of Islam leader Louis Farrakhan, posting enthusiastic notes of support for the Nation on social media and speaking at Farrakhan’s 2015 Washington, D.C. rally celebrating the twentieth anniversary of the Million Man March, as Tablet reported.

In 2018, Sarsour’s fellow Women’s March activist, Tamika Mallory, was criticized for publicly supporting Farrakhan after he delivered a speech in which he averred “the powerful Jews are my enemy.” Mallory claimed Jews are “the mother and father of apartheid,” and blamed Jews in Hollywood for encouraging “degenerate behavior.” Sarsour leapt to Mallory’s—and, in the comments to some of her Facebook followers, the Nation of Islam’s—defense, and tweeted her support for another anti-Semite who defended Farrakhan.

She has also offered enthusiastic support for Palestinian terrorists like Rasmea Odeh and cop-killing fugitives like Assata Shakur. At the same time, she has argued that Jewish progressives who criticized Rep. Ilhan Omar for anti-Semitic remarks have divided loyalties. Such criticism of Omar, she claimed “is not only coming from the right-wing but some folks who masquerade as progressives but always choose their allegiance to Israel over their commitment to democracy and free speech.”

For a self-proclaimed advocate of women, Sarsour is viciously hostile toward women who disagree with her. She tweeted that Ayaan Hirsi Ali, who is critical of Islam and who was the victim of female genital mutilation as a child, was “asking for an a$$ whippin,” adding: “I wish I could take their vaginas away–they don’t deserve to be women.” Eventually, Sarsour (along with Mallory) was removed from her leadership position in the Women’s March after many of its supporters protested that her involvement with the organization represented a tacit endorsement of anti-Semitism—to say nothing of Sarsour’s own blatant homophobia.

Rather than engage her critics, Sarsour blames Islamaphobia when she is called to account for her behavior. “The point of the term ‘Islamophobia’ as used by Sarsour and her sympathizers is very often a self-interested and dishonest one—namely, to delegitimize critics by lumping them in with fringe racists and bigots,” Jamie Kirchick noted in a profile of Sarsour in Tablet in 2017.

When CNN’s Jake Tapper called out Sarsour and the Women’s March over their support of Shakur, for example, Sarsour responded by claiming that Tapper had joined the alt-right.

So why did Bernie Sanders embrace such a toxic surrogate for his presidential run, especially given his own claim to want to fight anti-Semitism?

Sarsour seems clear about what she is getting from Sanders. As she recently tweeted, “My kids are brilliant at convincing elders to support Bernie. Two main arguments they use: Medicare-for-All (we have a lot of uninsured or underinsured folks in our extended family), and he’s ‘the best on Palestine’ (those exact words).”

But given the lessons American progressives should have learned from Jeremy Corbyn’s crushing defeat in the recent election in the U.K., Sanders’s tone-deafness with regard to Sarsour is especially perplexing.

His campaign is clearly eager to rebrand Sanders in the lead up to the first Democratic primaries.

A recent profile in Politico described Bernie rocking out to “Dancing Queen” on the campaign trail in New Hampshire and floating the idea of Elizabeth Warren as his running mate. Another profile in BuzzFeed offered up an empathetic, less shouty Bernie who “believes his presidential campaign can, he says, help people ‘feel less alone.’” Neither piece mentions Linda Sarsour.

Bernie might want to start listening to the voices of those who are paying attention to Sarsour. After reading Sarsour’s feeble non-apology for her remarks at the recent Palestine Conference in Chicago, Tel Aviv-based writer Matthew Schultz observed that Sarsour’s “clarification” of her remarks is in fact yet another “insidious attempt to obfuscate” what she really believes: That a  “Zionist Jew has no place on America’s left.”

If Bernie wants to reinvent himself as the avuncular socialist grandpa who sweeps Iowa caucus voters off their feet, less raving about corporate greed and more sympathy for people’s everyday problems might work. If he wants to persuade the rest of the country that he’s the progressive change-agent the nation needs, he will be far less successful unless he takes a hard look at the hateful anti-Semitism he’s endorsing by allowing people like Linda Sarsour to speak for him. 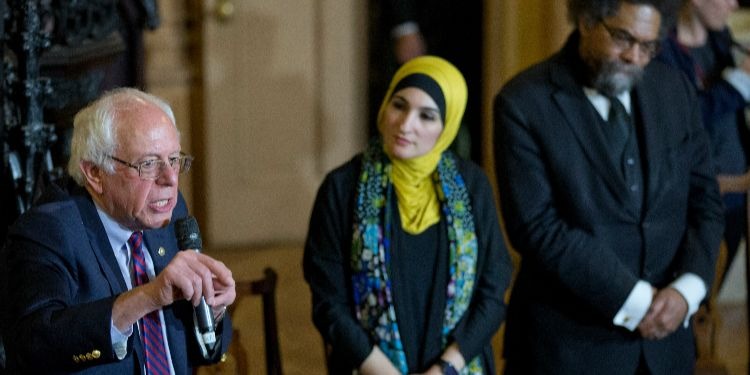