In New York, San Francisco, Washington, D.C., and other cities and towns across the country where public schools have remained closed for a year, parents gathered this past weekend to demand change.

In D.C., parents held a rally outside Mayor Muriel Bowser’s offices demanding that DCPS offer students the option of some in-person learning with a teacher for the last term of the school year. Those same parents also insisted that D.C.’s teachers should continue to be given priority for vaccination and that schools must keep “sensible” safety precautions in place. These demands are hardly radical; many public schools in states like Florida and private schools (including ones in D.C.) have been safely open since the fall with precautions—even before vaccinations were available.

I’m not a neutral observer of these events; both of my children attend D.C. public high schools, and both have not set foot inside a classroom for in-person learning in a year. Last week, one of their schools notified parents via email that teachers wouldn’t be returning to the classroom for the rest of the year. Instead, the school announced that it would continue to offer a handful of spots in “CARES” classrooms—wherein temporary workers hired as “proctors” sit in a room with masked students who do their virtual learning while teachers “teach” from home. It is, as it sounds, the DCPS version of a Potemkin village.

In the email, the school principal offered no explanation or justification for the continued school closure. Nor did they acknowledge that circumstances have changed dramatically since last year. In the intervening months, the city’s teachers have been prioritized for vaccination, COVID cases and deaths have dropped precipitously here and nationwide, and President Joe Biden has claimed that school reopening should be a priority (a claim that, given how beholden his administration is to teachers’ unions, should be treated with considerable skepticism).

Even as other school districts in nearby Maryland and Virginia announce plans for in-person school in the fall (and as private schools inside and outside D.C. have successfully educated the kids whose parents can afford to pay tuition for the entire school year), D.C.’s students languish.

At the same time, youth crime in the city and nearby suburbs has skyrocketed: Armed carjackings by teenagers have risen dramatically, with alleged perpetrators as young as 13 and 14. D.C. arrested a 14-year-old girl recently who was using a dating app to lure men to meet and then robbing them at gunpoint. What explains the alarming spike in crime among youths? “I can just say that when you have people out of school with a lot more time on their hands, I think that’s a large part of it,” a police detective in a Maryland suburb told local news.

Meanwhile, D.C.’s utterly inept school chancellor, Lewis Ferebee, who has been marketing DCPS as “reopening strong” while doing little to actually achieve that, and who has already publicly mused about keeping schools virtual next year, sent an email to parents on Friday  announcing that a “non-negotiable practice” of DCPS is to “provide opportunities for staff wellness.”

To that end, DCPS boasted that it had just sponsored a “staff wellness conference, complete with yoga, workshops to promote healing, and more.” Other teachers enjoy weekly “Wellness Wednesdays,” where they “receive tools for stress management and self-regulation” since “prioritizing staff wellness can improve morale and overall school culture.”

The fact that DCPS is hosting taxpayer-funded spa experiences for teachers who refuse to return to the classroom while students fall behind academically, socially, and emotionally tells you everything you need to know about the priorities of the city’s educators.

It’s worth noting that, nationwide, many teachers have bucked the message of their national unions. The Teachers4OpenSchools group helped organize this weekend’s protests and rallies. They have done excellent work enlisting teachers who are eager to follow the clear evidence that students need to be back in the classroom with their teachers. Numerous students who spoke at the D.C. rally mentioned how strange it was to spend an entire year in school without ever once meeting their teachers in person.

Unfortunately, those teachers are in the minority. The Chicago Teachers Union recently told its members not to respond to emails that offered them vaccination appointments and ignore questions sent to them by school administrators about whether they had been vaccinated. That might lead to an end to the “accommodations” that allow them to teach entirely from home.

Throughout this challenging year, public school parents have given school officials and our kids’ teachers the benefit of the doubt, over and over again. We’ve spent countless hours helping our kids through difficult lessons; we’ve watched as teachers pop in to “teach” a virtual class for 10 minutes before dismissing everyone and logging off; indeed, we’ve seen them fail to show up at all to video calls with their students. We’ve watched teachers receive priority for vaccination, only see the teachers’ union refuse to commit to ensuring their members return to the classroom. We’ve watched teachers pull stunts like piling up fake body bags outside the mayor’s office to protest having to do their jobs. And we’ve watched the mayor and school officials cave in to their demands every time.

In carefully constructed parent surveys sent out by the schools (some of which don’t even offer full-time return to school as an option), parents have been asked what they want the schools to do. When given the option, I have answered every survey and tried to articulate the perspective of parents like me who believe the overwhelming evidence shows that it is safe for kids to be back in school. I doubt anyone at DCPS ever read those comments, so I’ll just append the most recent one I sent last Friday when I was asked what my hopes were for the next school year.

It’s the rant of a deeply frustrated parent, yes, but after seeing the turnout at today’s protests, both here in D.C. and in other cities, and listening to the concerns and frustrations of other parents, it is the rant of someone who has some hope that parents might eventually protest loudly enough that school administrators and teachers’ unions will finally have to listen.

Here’s what I wrote:

Unless DCPS provides 5-days-a-week, in-person learning for all students in SY21-22, then I hope DCPS will be spending a lot of time in SY21-22 fending off justifiable lawsuits from DC parents for their failure to educate this city’s children.

Despite overwhelming scientific evidence that students could have safely returned to classrooms months ago, and clear evidence that virtual schooling is subpar, both academically and social-emotionally for students, DCPS has refused to make in-person learning a priority.

This school, in particular, has been egregiously derelict as one of the only high schools to offer NO in-person instruction for students—only fake “CARES” classrooms not staffed by teachers and non-instructional “activities” on Wednesdays.

It’s shameful and many of us who gave the teachers and administrators the benefit of the doubt a year ago when the pandemic started have lost all patience. Shame on DCPS and shame on the teachers and teachers union that have obstructed, delayed, and ignored scientific evidence about in-person teaching. You are harming our children.

If you don’t feel comfortable in a classroom, then please do us all a favor and find another job. I am tired of paying you not to do yours.

Parents are tired of asking for the return of in-person education. Now, they’re demanding it. 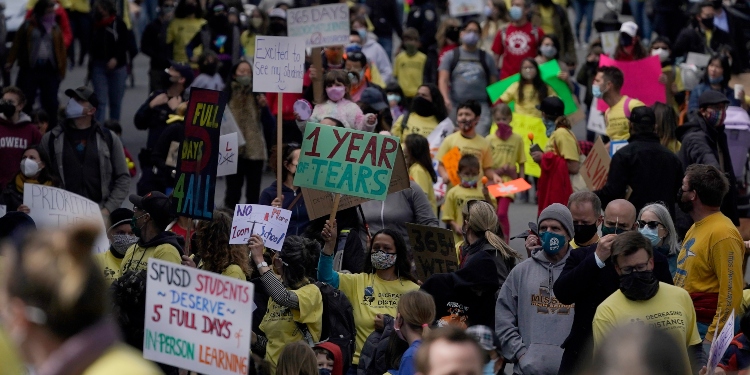