When fire engulfed Notre Dame cathedral in Paris this week, most responded with horror and an outpouring of sympathy and support for the French as they assessed the damage done to a monument of faith and humanity.

But not everyone. There were, unfortunately, the predictable conspiracy theorists who promoted nonsense online (including some who suggested the fire was the act of Muslim terrorists or other nefarious actors who sounded like plausible candidates to overeager subredditors). And as Thomas Chatterton Williams noted, there were the social justice activists who saw in the fire an opportunity to further their political agenda. Where reasonable people saw the tragic destruction of a monument to faith in the West, these activists all but cheered for the burning of a symbol of colonialist white patriarchal heteronormativity.

It’s not surprising that Notre Dame elicits complicated feelings–it is a centuries-old religious symbol that has survived deliberate (as opposed to this week’s accidental) attempts to destroy it, including during the French Revolution. Despite an increasingly secular French population (only slightly more than half of French people consider themselves Catholic, but fewer than 10 percent regularly attend services), it has somehow, stubbornly, remained a sacred space.

Perhaps this contradiction explains why the fire prompted unusually forceful reactions from some religious observers, who saw an opportunity to remind people that Europe’s secularization was a story with heroes, villains, and moral lessons for today. A writer for the Catholic Herald went so far as to argue that the cathedral was “built out of stone and wood and glass without electricity or computers. It was not built by committee, or consultants or according to state regulations. It was built by a culture superior to our own.” Perhaps he forgot that in the 12th century, this “superior culture” was not especially inclusive of other faiths and creeds, and was one where literacy was known only to a few, the infant mortality rate was punishingly high, and life for most was brutal and unfree.

Others saw in the partial destruction of the cathedral an opportunity for cultural reinvention, a chance to rebuild Notre Dame not in the image of a politically incorrect past, but in a form that embraces the cultural pieties of the present. Patricio del Real, an architecture historian at Harvard University, had the audacity and poor taste to tell Rolling Stone, “The building was so overburdened with meaning that its burning feels like an act of liberation.” One imagines Mr. del Real would not feel the same liberationist satisfaction if his own home burned down.

Like so many relics of the past, Notre Dame is also a commodity, the object of fascination by tourists yet somehow immune to their efforts to completely tame it or to keep it solvent. Some reports noted that, before the fire, “The cathedral has been at the center of a long-running financing dispute and pleas from the Church for more cash.” Like many aging grand dames, maintenance costs at the cathedral outpaced resources, even as expectations about retaining a stunning appearance remain high.

Even so, the intimate, powerful feelings many French people (and Parisians, in particular) have for Notre Dame aren’t the result of visiting it often–most don’t–but because, until this week, they could take for granted its permanence in the city’s landscape. The shock of the flames gave the lie to that comfortable assurance and brought crowds of strangers to the cathedral to stand vigil and sing for their lost lady of Paris.

How to explain such spontaneous solidarity? One Washington Post columnist suggested the reason there was such an intense reaction to the fire was that unlike so many other global news stories of tragedy, this was a random act, not a purposeful destruction. “Accidents push us to find meaning where none is at the ready,” the columnist argued. “They also take the politics out of the problem and allow universality to creep in . . . Most of all, an accident removes the ugliness. So many of today’s tragedies are things we do to ourselves, or to each other.”

It’s a lovely thought, but her own newspaper had already disproved it. In a Post opinion piece about the fire, Talia Levin (a writer who was ousted from The New Yorker after falsely claiming a wounded veteran was a neo-Nazi), equated The Daily Wire’s Ben Shapiro, who paid tribute to Notre Dame on Twitter by calling it a “monument to Western civilization” and Judeo-Christian values, with white nationalists such as the New Zealand mosque shooter. “These tweets evoked the specter of a war between Islam and the West that is already part of numerous far-right narratives,” Levin wrote. Levin’s take, as perverse and wrongheaded as it is, does at least serve as a reminder that even the burning of an iconic church must conform to the narratives of tribal politics and pettiness.

But the partial destruction of Notre Dame is also a chance to pause and reflect on the small miracle that something we crafted more than 800 years ago still endures. Notre Dame’s artifacts, chimeras, and sacred spaces (like a handful of other well-known wonders around the world) are part of our collective story. Regardless of background or creed or nation or political tribe, its existence teaches us something important about our common humanity. Even if we can’t always protect the buildings that symbolize such notions, let’s hope we can at least continue to protect the idea. 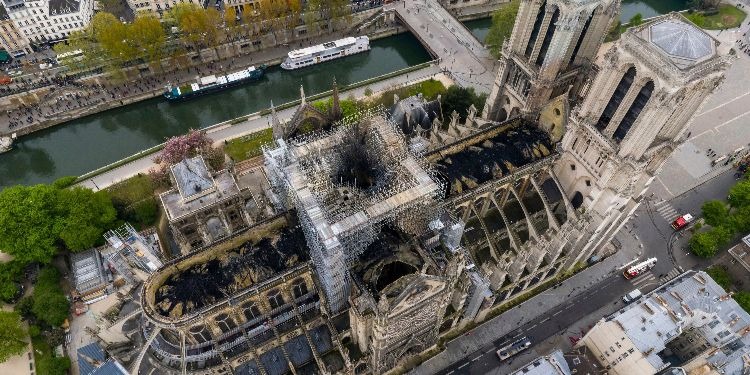