When the Trump administration created, via Executive Order, a 1776 Commission to promote “patriotic education,” it did not do so in a political vacuum. The Commission was established just two days before the November 2020 election, and was understood to be the administration’s response to the ideologically driven history promoted by the New York Times’s “1619 Project.”

It is thus not surprising to see the Times, whose corporate brand is heavily invested in the “1619 Project,” attack the 1776 Commission’s first (and only) report. In a tone of high dudgeon, Times reporters Michael Crowley and Jennifer Schuessler described the report as “a sweeping attack on liberal thought and activism.”

In fact, the 1776 Commission’s stated purpose was, as the report noted, to “enable a rising generation to understand the history and principles of the founding of the United States in 1776 and to strive to form a more perfect Union.” The report notes, “This requires a restoration of American education, which can only be grounded on a history of those principles that is ‘accurate, honest, unifying, inspiring, and ennobling.’” At a time when America’s educational system has for decades served up heaping portions of ideologically-driven narratives about America’s founding principles and woefully inadequate lessons in basic civics, this is a critical mission.

Unfortunately, the Commission’s report doesn’t meet the challenge. There are plenty of legitimate criticisms to make about its only published work. It reads like a rather hastily thrown together pamphlet; it lacks supporting notes or a bibliography; it makes sweeping statements grounded too much in present political polemic than in complicated historical fact; it tells the reader what our country’s founding principles are rather than showing by historical example the ways they have been lived by a diverse American people over time. It has the overall effect in both tone and lack of nuance as the “1619 Project.”

It was also clearly a rush job: The report was issued only a few months after Trump announced the formation of the commission itself. As a result, although the argument for less ideologically driven historical education could not come at a more critical moment, the report is a missed opportunity to make it.

Yet this is not what the Times criticized the report for doing. Instead, the Times griped that the 18-member commission that drafted the report “includes no professional historians but a number of conservative activists, politicians and intellectuals.”

This is not true. The Commission’s head, Hillsdale College President Larry Arnn, has a Ph.D. in government, as does Charles Kessler, editor of the Claremont Review. Victor Davis Hanson, also on the Commission, is, in fact, a professional historian and has long been a prominent contributor to the fields of military history and classics (he currently holds a position at the Hoover Institution at Stanford University). Disagree with Hanson’s outspoken political views all you like, but his credentials as a professional historian are sound.

And yet in the view of the Times, none of these credentials qualify the Commission’s members to discuss America’s past.

In a second article, the Times offered a further critique of “the ideas behind” the report and took issue with the study’s characterizations of progressivism, identity politics, fascism, and communism, among other things. The piece quotes several historians who disagree with the report’s political tone and lack of nuance, although most of their criticisms focus on arguments advanced in the appendix rather than the main body of the report. Their dislike of conservative arguments is hardly a surprise given that the field of history is among the most liberal in academe.

The real game was given away by the response of activist-intellectuals, however, who were quick to decry the report as yet another example of white supremacy. Ibram X. Kendi offered his usual Twitter hyperbole, arguing, “The 1776 Commission Report is calling forth our fealty to tyranny. But we will resist, like we resisted the proslavery founding fathers and their ideological descendants who wrote this report.”

There’s nothing to resist any longer. One of Joe Biden’s first acts as president was to eliminate the Commission and remove the report.

Predictably, “1619 Project” author (and non-historian) Nikole Hannah-Jones celebrated the news as a win for her side on Twitter. As she recently gloated to Bust magazine, “As much as a small group of white professors and conservatives have tried to discredit the Project, they’ve failed at that. They can’t stop the phenomenon . . . And for every new project—The 1620 Project, The 1776 Project—that tries to come out to ride on the coattails of The 1619 Project, it just speaks to the power of what we have done, and what we continue to do.”

As Bust described in its interview with Hannah-Jones, “With a triumphant smile, Hannah-Jones quips, ‘We are expanding into television and film, and Oprah Winfrey has signed on. There will also be books’ Indeed, a series of books based on the 1619 initiative will be published in 2021.” No wonder the 1776 Commission report prompted such a vigorous counter-attack by the Times; it has a franchise to protect.

There are, of course, many non-ideological narratives about America’s past that educators can use in their classrooms (most notably, Wilfred McClay’s excellent survey, Land of Hope). But few come with the free curriculum packages and slickly marketed materials that the “1619 Project” gives away to schools, which means that students effectively are fed a steady diet of identity politics-infused history and simplistic oppressor-and-victim narratives rather than nuance, from elementary through high school.

These historical narratives are reinforced in English classes where “woke” novels have replaced classic literature and activist groups like #DisruptTexts seek to ban the teaching of classic literature entirely. While the 1776 Commission’s report has plenty of flaws, it does state some necessary truths, such as “Identity politics is fundamentally incompatible with the principle of equality enshrined in the Declaration of Independence.” If the country’s students are never taught an objective history of those principles, how can we expect them to engage critically with a mainstream culture that relentlessly promotes the 1619 view of history?

James Grossman, the executive director of the American Historical Association, complained to the Times about the 1776 Report, “They’re using something they call history to stoke culture wars,” and promoting “cynical politics.” Whatever you think of the now-defunct 1776 Commission and its report, as the spread of ideologically-motivated histories like the “1619 Project” shows, stoking culture wars and practicing “cynical politics” are behaviors dominated by the Left. 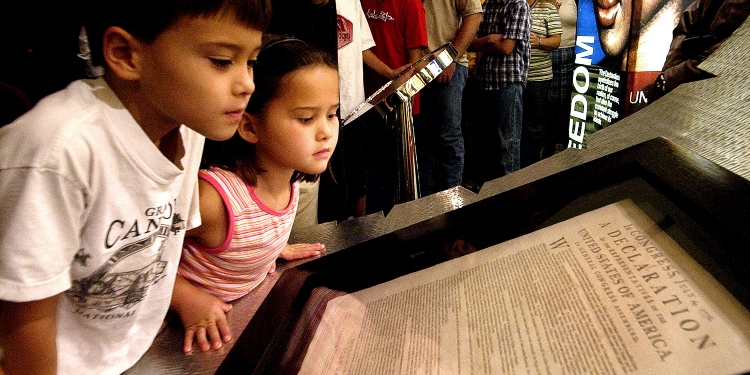