Elizabeth Warren’s announcement that she is ending her campaign for president should not have shocked anyone after her disastrous performance on Super Tuesday. Not only did she fail to win a single state, she came in third in her home state of Massachusetts. Evidently no amount of selfie-taking or issuing of policy papers or declarations of I-have-a-plan-for-that could salvage a campaign that ultimately failed to connect with Democratic voters.

You wouldn’t know this by reading the responses of her staunchest supporters, however.

Sentiments such as “We don’t deserve her” and the trending Twitter hashtag #ThankyouElizabeth” dominated the grieving process, as did tweets like this one from a supporter, who claimed, “Warren Democrats put courage over cynicism and fight for what’s right.” Another complained, “Most qualified candidate applying for the job—again—doesn’t get it.” (“She’s not an old white man,” another Twitter user replied by way of explanation). Audrey Gelman, creator of The Wing, an all-female club for progressively-minded rich women, tweeted: “glass ceiling. fully intact.”

Warren didn’t mention the glass ceiling during her remarks to her staff, but she did lay claim to one election victory: pushing Mike Bloomberg out of the race. According to NBC News, she said, “We have been willing to fight, and, when necessary, we left plenty of blood and teeth on the floor. And I can think of one billionaire who has been denied the chance to buy this election.”

If claiming Bloomberg’s scalp (sorry) is Warren’s chief legacy in this race, then she and her supporters will miss an opportunity to learn something from her failure to compete. The next 48 hours will see many rationalizations for her campaign’s failure, but any attempt at an autopsy should begin with an acknowledgment that Warren’s chances were always oversold by a sympathetic media to a largely credulous (and largely elite) world of consumers.

Just look at The Atlantic’s attempt to frame the end of the Warren campaign: “Who could have predicted that Elizabeth Warren would fall so far?” The answer is simple: Anyone who wasn’t fan-girling her from day one, which too much of the mainstream media did. Voters were fed a steady diet of puff pieces featuring her loyal husband and cute dog, as well as flattering profiles depicting her as the smart person’s choice because, although she was reform-minded, she wasn’t a fire-breathing socialist like Bernie Sanders.

The disappointment these supporters now feel requires rationalization (and someone to blame), and the obvious but incorrect culprit? Sexism. As feminist writer Jessica Valenti wrote in a woe-is-women post for Medium, “It’s enough to make me feel, well, despairing: that we had the candidate of a lifetime—someone with the energy, vision, and follow-through to lead the country out of our nightmarish era—and that the media and voters basically outright erased and ignored her.  Pundits will all have their theories; fears over ‘electability’ will likely be their #1 explanation. Don’t tell me this isn’t about sexism. I’ve been around too long for that.”

Valenti and her ilk have an odd definition of “erased.” Warren (and Klobuchar) were endorsed by the New York Times, and Warren logged the most speaking time during several of the major televised debates. As for sexism, wasn’t the Democrats’ last candidate for president a woman?

The real reason Warren’s campaign foundered was more mundane: she failed to win supporters among non-white, non-college educated Democratic voters. Her fan base was always made up of the same kind of people who dominate the national media: well-educated, progressive-leaning white people. News flash: This is not the majority of America, nor even the majority of self-identified Democratic voters. This is why she couldn’t even win over female Democratic voters in her own state. As the New York Times noted, “Even among her strongest demographic group—white college-educated women—Ms. Warren had just 33 percent support, not nearly enough to offset her weakness with other groups.”

Elizabeth Warren didn’t have a gender problem; she had a trust and authenticity problem. Her multiple fabulations about her personal history, including a false claim that she was fired because she was pregnant and the infamous and repeated efforts to pass herself off as Native American, undermine her narrative of being a truth-telling, incorruptible champion of the people. As well, she opportunistically embraced intersectionality politics (such as her claim that a trans person would vet whomever she might choose as her Secretary of Education and her attempts to paint Bernie Sanders as a raging sexist) in a way that was likely off-putting for more moderate Democratic voters.

But there is a useful lesson here if Democratic voters are willing to hear it. A recent study of Democratic voters identified a curious and self-defeating phenomenon: “Democrats overestimate the explicit prejudice of the American electorate, and thus see disadvantaged groups as less electable.” The authors of the study cite a 2019 poll that found “there were many Democrats who believed Elizabeth Warren was the candidate who would make the best president, but did not plan to vote for her because they believed it would be difficult for a woman to win a presidential election.”

But as the authors point out, that’s not true. “One study of congressional races found that between 1982 and 2012, female candidates were not less likely to be elected than male candidates,” and during the recent 2018 midterm elections, “non-incumbent female candidates for Congress were more likely to win than non-incumbent men, possibly because female candidates increased turnout among women.” Their advice for voters? Don’t overestimate the extremity of your opponents’ political views, and don’t assume that all voters share your view of the world as irredeemably bigoted.

Also, stop blaming sexism when a female candidate can’t sustain a winning campaign. Sometimes, she’s just not that good of a politician. In Elizabeth Warren, the left-leaning chattering class believed they had found their she-persisted, girl-power, policy-paper-wielding fever dream of a presidential candidate. On Tuesday, the rest of the Democratic Party, thankfully, told them to wake up. 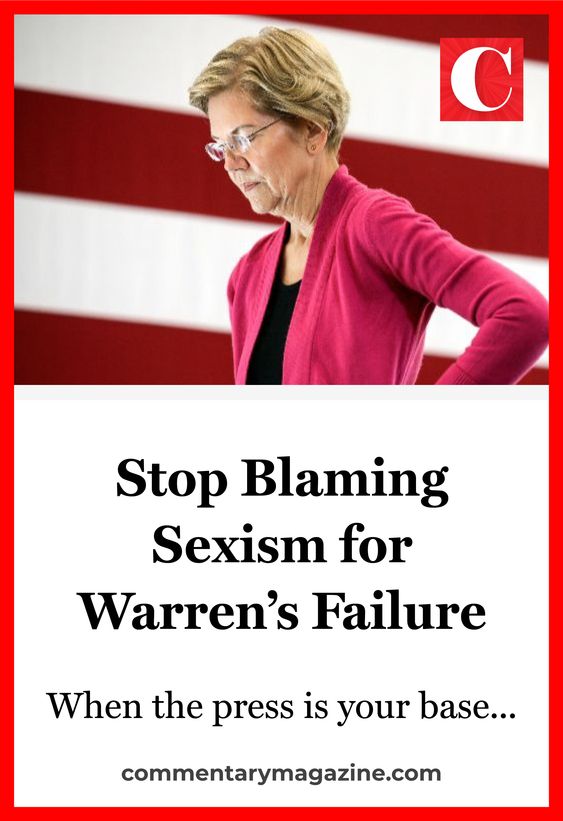