The third night of the Democratic National Convention featured many paeans to women, as well as speeches by former Secretary of State Hillary Clinton and vice presidential nominee Kamala Harris. Upbeat videos offered outtakes from the 2017 Women’s March, you-go-girl statements about all the things women can do, and a nod to the women who fought for passage of the 19th Amendment. Women were repeatedly (and somewhat condescendingly, depending on your perspective) praised for being “rabble-rousers.”

It’s a much milder tone than the one the mainstream media has taken when discussing women’s feelings lately.

Back in March, as the seriousness of the coronavirus pandemic began to imprint on the national consciousness, the gender editor of the New York Times reminded readers that, even though men were dying of the virus at a higher rate than women, the real victims of the pandemic were the moms who had to juggle work and family obligations, and whose only support system was Zoom cocktail hours with their equally beleaguered friends. These women were upset, we were told, and as one pollster told the newspaper, “I think women overall are feeling this more acutely.”

Then there was the virtual canonization of the “Wall of Moms” protestors in Portland, whom the media propped up as examples of angry, noble Black Lives Matter allies. At least, until evidence that they were, in fact, not all peaceful and not even all mothers, emerged, and the Moms predictably descended into identitarian infighting and chaos.

Now the media has anointed a new group of angry ladies, the “Rage Moms,” according to the New York Times. As reporters Lisa Lerer and Jennifer Medina write, “President Trump’s handling of the pandemic is generating an entirely different sentiment, one not traditionally bestowed upon female voters or mothers. ‘I am a rage mom,’ said Senator Patty Murray, the highest-ranking woman in Senate leadership.”

The story goes on to note, “Women were more likely than men to report having participated in protests over the past two years,” and claims that “rage moms are railing in Facebook groups about school shutdowns and in teacher union meetings about reopening without proper protection from the virus. They’re also packing virtual town halls with frustrations about schools, child care, and the lack of leadership.”

But the political media’s focus on women’s frustrations emphasizes feelings over specific policy responses. The Times story about Rage Moms includes an image of a woman at a protest against the reopening of schools in Chicago, which showed her fist raised in anger and the phrase, “Return only when schools FEEL safe” painted on her car window.

The Times is clearly happy that so many women appear to be so angry because it plays into a broader narrative about female empowerment and activism that the paper’s gender editors have been promoting for some time. If newspapers are the first draft of history, then the Times is getting a jump on posterity by publishing a wildly revisionist story about the past few months.

“The pandemic is the spark, but the backlash against Mr. Trump has been burning since the day after his inauguration, when millions of women joined protests across the country,” one dispatch read. “Their fire has endured through #MeToo, waves of teachers’ strikes led by predominantly female unions, the outcry against school shootings, and Black Lives Matter demonstrations, a movement started largely by female racial justice activists.” Note that while praising the metaphorical “fire” of female anger, the reporters fail to mention the very real fires set and violence and destruction wrought in the name of those same protests. Nor do they acknowledge the existence of politically conservative women and their concerns.

The hope, apparently, is that these Rage Moms will all end up voting for Joe Biden. But if the media is emphasizing rage, the Biden campaign, by contrast, is offering women voters a vision of the candidate as the political version of therapeutic self-care, more GOOP than gladiator. As the Times reported, a Moms For Biden group hosts regular Zoom meetings where “one person after another spoke of fears and frustrations” rather than policy issues (when asked about which issues concerned her most, “one mother couldn’t narrow it down. Instead, she simply said ‘less worry’”).

The Biden campaign has been wooing women since the Spring, when Rob Flaherty, digital director of the campaign, told Politico they were using platforms like Facebook to court what they called “empathy moms.” The featured content? A “Biden Brunch” that encouraged likely voters with hard-hitting messages such as: “Mimosas optional, but encouraged!” And a “Sincerely, Joe Biden” campaign that featured “letters submitted by supporters, along with Biden’s response, as an example of how he is offering empathy to people when he can’t greet them personally,” CNN reported. The effort is meant “to draw a contrast between Biden and President Donald Trump both implicitly and explicitly, particularly on issues of character, like empathy.”

The cloying quality of the content is intentional: As Flaherty said, “The suburban Facebook empathy moms that we think about a lot, those folks are just hungry for the contrast between the darkness of Donald Trump and the goodness of Joe Biden.”

Treating politics like a turgid soap opera might be effective as a short-term strategy for garnering women’s votes, particularly given Trump’s so far unsuccessful efforts to reach out to the proverbial “housewife.” But what will Biden do if he wins the presidency and is confronted with continued resentment and anger from women (many of whom are among the radical activists in the Democratic coalition)? After all, the uniting force for these empathy moms isn’t any particular policy of Biden’s or even his choice of a running mate who checks the identity politics boxes demanded of him. It’s an intense dislike of Donald Trump.

It’s much easier to campaign as an empathic feelings-panderer than to govern as one. If the rage of the Rage Moms is as intense and justifiable as the mainstream media would have us believe, they won’t be putting away their pussy hats any time soon. And Biden will discover that he’ll have to offer them more than mimosas. 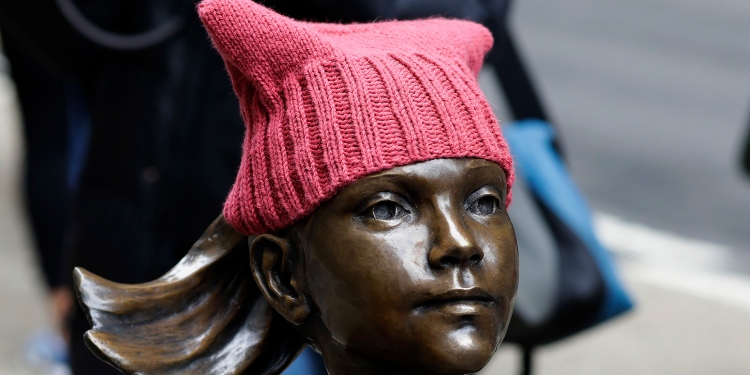