In The Commissar Vanishes, David King studied how Vladimir Lenin and Josef Stalin doctored and falsified photographs to produce propaganda for the Soviet regime. Fellow revolutionaries-turned-enemies, like Leon Trotsky and Nikholai Yezhov, were “disappeared” from numerous photographs just as they were violently eliminated in real life, in service to the revolution’s goals.

Ideological revolutions in the U.S. have, fortunately, never become so brutal. But the impulse toward ad hoc purification of one’s own movement by the removal of inconvenient facts or by outright falsification remains deeply entrenched. President Trump offered an example in 2017 when he falsely boasted that his Inauguration attendance numbers were the largest for any president, and tried to use strategically cropped photographs of crowds on the National Mall to prove it.

Recently, as the Washingtonian reported, Joe Biden’s presidential campaign released a photo of Biden and his then-young son in which the son’s hat had been digitally altered to remove the logo of the Washington Redskins football team. (The Redskins have announced plans to change the team’s name to something less offensive to modern sensibilities). When asked about the Redskins Vanishes incident, Biden’s campaign lied, claiming it was done to avoid “copyright issues” related to branded sports items, a ridiculous statement given that a moment spent on Google yields footage of Biden prominently wearing a Phillies hat during a recent guest spot on Jimmy Kimmel’s late-night comedy show.

In a nation with a free press (and a subset of citizens eager to highlight its political opponents’ missteps), such clumsy efforts to airbrush history usually fail.

Two recent cases of ideologically motivated “disappearing” suggest a renewed effort to erase or rewrite history in service to a cause—an effort in which the mainstream media is complicit.

Consider the most recent chapter in the ongoing New York Times’ 1619 Project. Although criticism of the Project’s ideologically presentist and historically inaccurate narrative has been a constant since the Project’s publication last year, it captured public attention again last week when President Donald Trump announced the formation of a 1776 Commission to promote patriotic education. Announcing this initiative, the president called out the 1619 Project specifically for its deficiencies: “The left has warped, distorted, and defiled the American story with deceptions, falsehoods, and lies,” Trump said. “There is no better example than the New York Times’ totally discredited 1619 Project. This project rewrites American history to teach our children that we were founded on the principle of oppression, not freedom.”

The leader of the 1619 Project, Times reporter Nikole Hannah-Jones, has long refused to respectfully engage her critics. She memorably dismissed the scholarly work of eminent historians with a tweet: “LOL. Right, because white historians have produced truly objective history” and said of Pulitzer Prize-winning Civil War historian James McPherson, one of the more prominent critics of the 1619 Project’s factual inaccuracies, “Who considers him preeminent? I don’t.”

This time, the Times and Hannah-Jones made no attempt to defend their claims; they simply memory-holed the controversial bits of the project, then lied about them. As Phillip W. Magness describes in Quillette, “Without announcement or correction, the newspaper quietly edited out the offending passage” (that 1619 is the nation’s “true founding”) and has also “taken to quietly altering the published text of the project itself after one of its claims came under intense criticism.” Then, Hannah-Jones lied: “The #1619Project does not argue that 1619 was our true founding. We know this nation marks its founding at 1776,” she posted in a (now-deleted) tweet, then doubled down on this spurious claim during an appearance on CNN.

The lie is brazen because it is so easily disproven: As the Times itself states in its online description, “It aims to reframe the country’s history, understanding 1619 as our true founding.” In the print special edition of the New York Times Magazine that was devoted to the project, the intention is also clear. One section notes, “”[T]he year 1619 is as important to the American story as 1776. That black Americans, as much as those men cast in alabaster in the nation’s capital, are this nation’s true ‘founding fathers.’” Likewise, the Pulitzer Foundation’s curriculum based on the Project and used in public schools across the country says much the same: The Project “challenges us to reframe U.S. history by marking the year when the first enslaved Africans arrived on Virginia soil as our nation’s foundational date.”

Hannah-Jones stated this explicitly herself in a tweet in 2019 (and repeated as much in numerous public appearances): “I argue that 1619 is our true founding. Also, look at the banner pic in my profile.” The banner pic is the date 1776 struck through and replaced by 1619.

It is especially ironic that progressives such as Hannah-Jones, who eagerly cancel people for tweets or statements made when they were high school students (while giving themselves a pass on their own questionable youthful enthusiasms, such as Hannah Jones college-age musings calling white people “barbaric devils” and “bloodsuckers” and claiming “Christopher Columbus and those like him were no different then [sic] Hitler”) now claim that their own tweets from a few months ago shouldn’t be taken seriously. The Times must think its readers are either ignorant fools or so ideologically committed that they can be spoon-fed any amount of propaganda.

A similar contempt for the common sense of its supporters can be found among the leaders of the Black Lives Matter movement, which also recently memory-holed some of its controversial statements. The BLM website used to feature an extensive section on “what we believe,” including the organization’s vow to “disrupt the Western-prescribed nuclear family structure,” and a claim that they were “freeing ourselves from the tight grip of heteronormative thinking.” That entire section of the website has now been removed.

Instead, visitors eager to learn more about what BLM believes land on a “404 Not Found” page .

Not surprisingly, the organization’s page soliciting donations is functioning smoothly, and the group continues to promote blatant falsehoods on its website. Among them, the claim that, “In 2014, Mike Brown was murdered by Ferguson police officer Darren Wilson,” even though a thorough investigation by the Obama Justice Department determined Wilson’s actions were a justifiable use of force, not murder.

At least, when BLM disappeared its own explanation of what it was, it did finally set the record straight on one thing. The last sentence of the now-deleted page claimed, “We embody and practice justice, liberation, and peace in our engagements with one another.” As countless examples from the past few months demonstrate, BLM activists have taken to harassment and assault in their “engagements” in cities across the country, and regularly attack people who attempt to film their activities. So much for practicing peace.

If changes made by the Times and BLM signaled a good-faith effort to revisit their ideological positions, or perhaps even reform their thinking with regard to our country’s founding principles or the importance of strong families, such revisions would be welcome.

In fact, since they were done in a way that hindered transparency, and with no accompanying discussion by leaders of why such changes were made, one can only conclude that the alterations were done to shield both of these ideological movements from criticism. Like the best authoritarian strongmen, the 1619 Project and the BLM movement have perfected the art of vanishing. 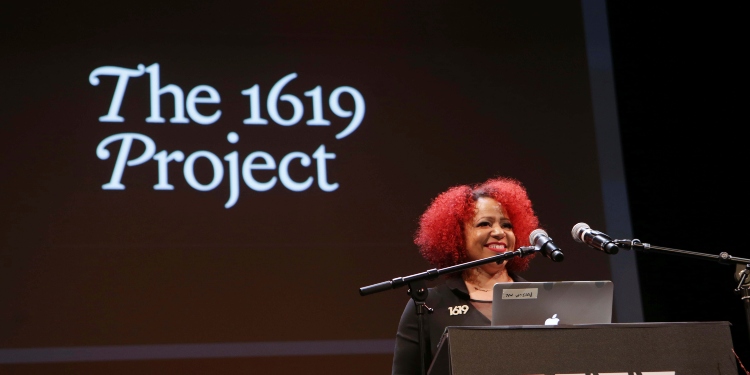