It’s a fact many observers of the collapse of Afghanistan to the Taliban have chosen to forget, particularly regarding the lives of women and girls.

But the Taliban’s actions contradict their words. Since Kabul fell, reports have poured in of women and girls being beaten by Taliban forces. Some footage shows horrific images of Taliban soldiers beating a woman and her child unconscious. Those attempting to flee are being forcibly turned away at Taliban checkpoints. Girls are being turned away from schools and women’s health clinics shut down in places like Kandahar and Herat. Women report being refused service in stores and told to return only with a male relative as an escort.

And as for the female news presenters? As the New York Times reported, hours after that interview by a female reporter of a Taliban spokesperson, “a prominent anchorwoman on state television, Khadija Amin, tearfully told a Clubhouse chat room that the Taliban had suspended her, and other women employees, indefinitely.”

Apparently, these actions are less important than the words Biden wants to invoke to spin the best possible narrative around his disastrous withdrawal. In Washington, the Biden Administration issued a statement (co-signed by the European Union, the UK, Switzerland, and many other countries) declaring, “We are deeply worried about Afghan women and girls, their rights to education, work, and freedom of movement . . . We in the international community stand ready to assist them with humanitarian aid and support, to ensure that their voices can be heard.”

Similarly, Biden’s ambassador to the United Nations, Linda Thomas-Greenfield, appeared on CNN to congratulate herself and the administration for pushing the UN Security Council to issue a “very strongly worded press statement” that declared “in no uncertain terms” that “we expect the Taliban to respect women’s rights” and to “be respectful of humanitarian law.”

The only problem? The Taliban operates under sharia law, and as it has chosen to interpret that law, there are no women’s “rights” to respect, to say nothing for Thomas-Greenfield’s vague blandishments about international “humanitarian law.” The Taliban’s recent PR campaign demonstrates that it is clearly happy to enthusiastically lie to the world about its intentions and behavior; it’s hardly likely to be swayed by firmly worded international statements.

We know this already because the Taliban showed us with their actions how much they respect women the last time they held power.

Remember Bibi Aisha? It was a little more than ten years ago that Time magazine put her on its cover. She was the teenager whose nose and ears were chopped off by the Taliban for the sin of trying to flee the abusive household of her in-laws. She was one of many women assaulted, sold off as child brides, and abused merely for exercising her basic human rights—or, from the Taliban’s perspective, for the sin of being born female in a Taliban-controlled country. Malala Yousafzai was shot in the face for speaking out about women’s education. Women had their thumbs chopped off for wearing nail polish. If you were accused of adultery as a married woman, you were stoned to death. (And the Taliban consider homosexuality a sin also punishable by death).

So why is the Biden Administration and its supporters in the media talking about the Taliban as if the terrorist group has experienced some kind of #MeToo-style reckoning since they last held power?

To believe, even for a moment, that a violent, theocratic regime has altered its views on women is worse than naive. It’s despicable.

The women of Afghanistan are, tragically, required to be more realistic than the Biden Administration and their pontificating Western feminist “allies.” This week, as cities fell to Taliban soldiers, women rushed to find burqas to cover themselves before they were beaten or killed for failing to do so. They saw their daughters turned away from schoolrooms and from the offices where they used to work. Zarifa Ghafari, Afghanistan’s youngest female mayor, told a British newspaper this week, “I’m sitting here waiting for them to come. There is no one to help me or my family. I’m just sitting with them and my husband. And they will come for people like me and kill me. I can’t leave my family. And anyway, where would I go?” This isn’t fatalism on her part; it is, unfortunately, clear-eyed realism.

Actions speak louder than words for Americans, too. Donald Trump’s utterly misguided withdrawal plan and Biden’s disastrous execution of it shows just how much our actions have failed to match our rhetoric. We have failed the people of Afghanistan, in particular the many Afghans who assisted our soldiers for the past twenty years as support staff, and translators, and guides. The Biden Administration’s incompetence and delay in processing their applications for entry to the U.S. will cost thousands of them their lives. As well, with the evidence before us of the administration’s bungled exit strategy, the United States should already have done what several other nations found fit to do immediately: Pledge to take as many Afghans fleeing persecution as risk their lives to reach our door.

Ignore the Biden Administration’s feel-good rhetoric and “firmly-worded statements.” No one in the administration can claim ignorance of the Taliban’s previous treatment of women. And anyone who claims we should give the Taliban the benefit of the doubt now is either a fool or a monster. 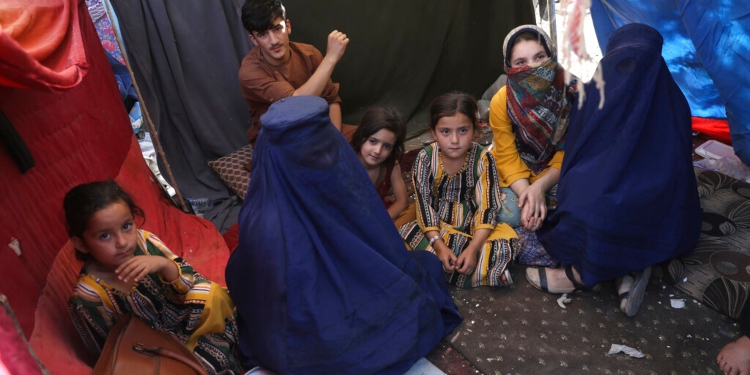