Over the weekend, hundreds of people in Chicago descended on the city’s Magnificent Mile to smash and loot businesses and attack police officers. Thirteen police officers were injured amid criminality so brazen (one looter drove a U-Haul up to a store to fill it with stolen goods) that even Chicago’s progressive mayor, Lori Lightfoot, had to concede that what occurred was “abject criminal behavior.”

The situation, which continued into the early hours of Monday morning, became so volatile that law enforcement raised the bridges all around the Chicago River and closed mass transit into the area. One Chicago alderman who spoke to the Chicago Tribune “described a scene in which officers were overwhelmed by looters and apparently did not have much of a plan for restoring order,” despite the fact that similar looting had occurred in both May and June in the city.

Earnest supporters who expected Black Lives Matter to denounce such lawlessness as antithetical to their movement’s goals might be surprised to learn that, on Tuesday morning, BLM Chicago organized a protest outside a Chicago police station in support of the arrested looters. “That is reparations,” one BLM activist told reporters. “Anything they wanted to take, they can take it because these businesses have insurance.” BLM also issued a statement threatening more unrest unless the city gives in to its demands.

Meanwhile, on Sunday in Washington, D.C., a large neighborhood block party—advertised heavily on social media (with fliers) in open violation of Mayor Muriel Bowser’s COVID-related order prohibiting gatherings of more than 50 people—descended into mayhem when at least four gunmen opened fire. Twenty people were injured in the violence, including an off-duty police officer, and one man was killed. As in Chicago, D.C.’s chief of police conceded that there were “not enough police officers on the scene to handle a crowd of that size.”

Sunday’s death adds to the total of more than 115 people who have been killed in the District this year, a 17 percent increase from the previous year (which itself saw the highest number of murders in the city in a decade).

When questioned by reporters about why no action was taken to prevent the block party, Mayor Bowser claimed that she didn’t want to prompt negative reactions. “We don’t think it’s OK for a block party to grow to that size,” she said. “And at the same time, I’m saying that, there’s other people saying, ‘Well you can’t send the police in, Bowser. That’s just going to cause more trouble.’ So, there is a conundrum.”

There is no conundrum. Bowser’s actions, like those of mayors like Lori Lightfoot and Bill DeBlasio, have allowed lawlessness to thrive over the past few months and are a glaring example of poor leadership. On the Upper West Side of New York City right now, vagrants and drug addicts openly engage in criminal behavior on sidewalks, and last week, two random violent attacks, including a stabbing on a subway platform, occurred. As a Wall Street Journal reported, an “analysis of crime statistics among the nation’s 50 largest cities found that reported homicides were up 24% so far this year, to 3,612.”

But some city dwellers are beginning to demand a reckoning from public officials, and their concerns reveal some serious cracks in the preferred narrative about Black Lives Matter protests, justice, and law enforcement.

The New York Times reports that several progressive black members of New York’s City Council, including Vanessa Gibson from the West Bronx, are challenging other council members’ efforts to defund the NYPD. Speaking of her constituents, Gibson said, they “want to see cops in the community. They don’t want to see excessive force. They don’t want to see cops putting their knees in our necks,” she said. “But they want to be safe as they go to the store.” A few council members went further, attacking white progressive calls to defunding the police as a form of “colonization” and “political gentrification” that threaten the safety of their constituents.

It’s heartening to see cracks appearing in the progressive narrative about defunding the police and crime; it’s an acknowledgment of the complicated nature of the social challenges the country currently faces. But it remains a minority position on the left.

New York Times columnist Charles Blow recently lamented, “Even as support for Black Lives Matter grew, many Americans still opposed the things the movement demanded” and complained about “people cosplaying consciousness, immersing themselves in the issue of the moment” rather than embracing policies like defunding police or toppling statues of the country’s Founding Fathers.

The most egregious attempt to paint the reasonable reaction to violent protestors as someone else’s fault was a recent story in Politico proclaiming that Republicans, facing a “bleak November” election, are “stoking fear by trying to redefine the Black Lives Matter movement as a radical leftist mob looking to sabotage the white, suburban lifestyle.” Politico described BLM, which is avowedly radical in its mission statement, as “a decentralized ecosystem,” and made no mention of the violence that has appeared hand-in-glove with BLM-organized protests since they began earlier this summer.

Such narratives can only be promoted by the willfully ignorant. Just last week in Indianapolis, a group of BLM protestors illegally blocking a major street was filmed pulling guns on a driver who was trying to get around them. That’s hardly “peaceful” behavior (in some jurisdictions it would be aggravated unlawful restraint, which is a Class 3 felony).

In cities across the country, BLM protesters have been showing up at the private homes of officials to harass and threaten them throughout the night. A Native American city councilwoman in Seattle, who did not immediately throw her support behind a bill to abolish the police department, became the target of protestors who camped out on her lawn, shining bright lights into her home, shouting on bullhorns, and spray painting “corporate bootlicker” on her street. “It’s not a peaceful protest—it’s terror,” Ms. Juarez told the New York Times.

Similarly, a lawmaker in Oakland, California awoke in the middle of the night to protestors setting off firecrackers and throwing paintballs and eggs at her home, and in the morning found messages spray-painted on her home, including, “Black Ppl Use 2 Live Here.” As the lawmaker told a reporter, “This felt like a threat that certainly had a violent tone. And the intense damage to our property was significant.”

Armed, white neighbors protected the home of Seattle’s black police chief, Carmen Best, when protestors attempted to intimidate her in her neighborhood. And Mayor Jenny Durkan of Seattle, who was happy to have protestors occupy land in Seattle’s Capitol Hill neighborhood this summer, felt differently when protestors came to her home and spray-painted “Guillotine Jenny” on her street.

Note to those who continue to deny that crime is on the rise and that BLM protests are violent: Rioting and looting and violence can no longer be ignored, and peaceful protestors rarely invoke the guillotine. 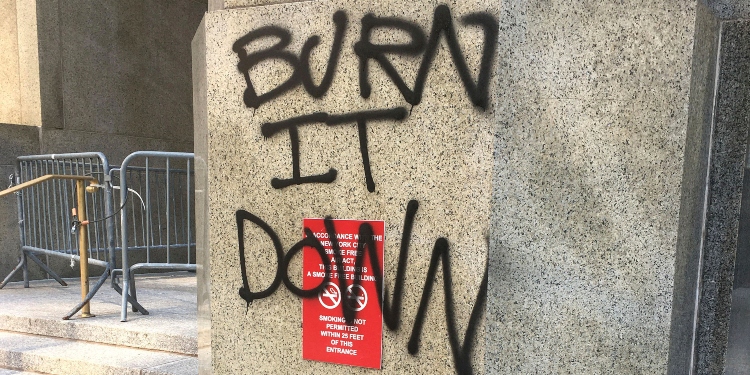