Ever since Breonna Taylor was killed in her Louisville, Kentucky home in March by police executing a no-knock search warrant, local activists have organized protests and demanded reforms from the Louisville police department.

But this week the protests took on a new tone—and a new look—and garnered national media attention as a result. Why? Because two well-known professional activists (and well-known anti-Semites), Linda Sarsour and Tamika Mallory, neither of whom live in Louisville, were arrested there (and released in the early hours of the next morning).

Sarsour and Mallory didn’t appear as individual citizens supporting a spontaneous march. They came to garner press and donations for their new organization, Until Freedom, which describes itself as “an intersectional social justice organization rooted in the leadership of diverse people of color to address systemic and racial injustice.” But the group is comprised of just four people: Sarsour, Mallory, Angelo Pinto, and Mysonne Linen. It’s not clear if the organization is an officially registered non-profit (a search of the IRS database and Charity Navigator turned up nothing on the group, and it is not among the civil rights organization Charity Navigator lists as highly-rated; it could be too new a group to have its nonprofit status approved yet).

The intention was clearly to escalate tensions in Louisville. “We are here to amplify,” Sarsour told the group of protestors that assembled to be “trained” for that day’s activities, adding, “We are here to disrupt, we are to make sure that those in power know we are here to escalate.” She boasted, “We broke quarantine to come hang out with you all.”

A local reporter covering the event noted that the people who gathered to participate had no idea what the plans for the day’s protest were. “Most involved still don’t know where we’re headed,” the reported noted, as the group of approximately 200 started marching down the street. A cameraman walked backward along the route, carefully filming Sarsour as she marched.

The assembled protestors might not have known where they were going, but most were dutifully wearing Until Freedom-branded T-shirts, hats, and sweatshirts. The effect was cult-like, especially when the march reached its destination: the private home of Kentucky Attorney General Daniel Cameron.

The protestors quickly filled up his front lawn and starting yelling through megaphones with “Defund the Police” written on them. They could have protested peacefully on the public street, but they refused. Even despite repeated requests from law enforcement, they demonstrators instead blocked the front door to Cameron’s house and would not leave his property. “We want you all to know that you may see us often in your neighborhood,” Sarsour shouted at onlookers. Eventually, some of the protestors who refused to leave Cameron’s front lawn were arrested, including Sarsour and Mallory.

The participants might not have known what they were doing, but the organizers did. As a local Louisville news station reported, “Tuesday’s gathering wasn’t the usual rally or protests. It was synchronized, organized, and coordinated. People had to register to participate. Until Freedom organizers know and keep track of participants. Actions are day-long, the specifics of which are unknown until they happen, and it all starts with protest training.”

They also included links to their personal GoFundMe accounts; Tamika Mallory solicited donations for Until Freedom on her Instagram account. Sarsour somehow managed to find time during her incarceration to lament the fact that her Louisville stunt left her unable to tweet about Bari Weiss’ resignation from the New York Times: “I was in jail yesterday so couldn’t join in on the Bari Weiss NYTimes going away party. I was with you all in spirit.” (She later made up for it with several inane tweets).

Despite Until Freedom’s repeated claims that Louisville leaders are doing nothing about Taylor’s death, an investigation is ongoing. As Cameron noted in a statement explaining the arrests of protestors, “The stated goal of today’s protest at my home was to ‘escalate.’ That is not acceptable and only serves to further division and tension within our community . . . Justice is not achieved by trespassing on private property, and it’s not achieved through escalation. It’s achieved by examining the facts in an impartial and unbiased manner. That is exactly what we are doing and will continue to do in this investigation.”

As the Washington Post noted, Cameron, who is serving as the special prosecutor investigating Taylor’s death, has consistently asked the public to be patient. “An investigation of this magnitude, when done correctly, requires time and patience,” he said during a press conference in June. “I have a specific obligation to see that anyone accused of a crime is accorded procedural justice and that guilt is decided upon the basis of sufficient evidence, rather than public opinion.”

More concerning is why citizens of Louisville want an “ally” like Sarsour furthering the cause of justice for Breonna Taylor. Sarsour, an unapologetic bigot, shares the BLM cause only insofar as she can use it to promote her own anti-Israel and anti-Semitic agenda. Sarsour’s and Tamika Mallory’s anti-Semitism (and continued support of other anti-Semites such as Louis Farrakhan’s Nation of Islam) prompted many local chapters of the Women’s March they are credited with helping found to break away from the national organization. Mallory and Sarsour have both been removed from the Women’s March board.

That hasn’t dampened their enthusiasm for exclusionary bigotry. In an announcement about a Juneteenth rally for racial justice that Sarsour helped organize through another one of her activist organizations, MPower Change, promotional materials said the rally was “open to all, minus cops & Zionists.”

In another recent speech, Sarsour claimed, falsely, that an Anti-Defamation League-sponsored program in Israel for law enforcement led to American police officers harming black Americans. “I’ll give you an example of something that they do,” she said, “If you are part of a criminal justice reform movement, if you believe in the idea of ending police brutality and the misconduct of law enforcement officers across the country, then you do not support an organization that takes police officers from America, funds their trips, takes them to Israel so they can be trained by the Israeli police and military, and then they come back here and do what? Stop and frisk, killing unarmed black people across the country.”

The message seems to be spreading to other BLM supporters. During a recent BLM protest in Washington, D.C., marchers chanted “Israel, we know you, you murder children, too.”  And as Algemeiner reported, on the anniversary of the Louis Farrakhan-sponsored Million Man March, Sarsour said, “The same people who justify the massacres of Palestinian people and call it collateral damage are the same people who justify the murder of black young men and women.”

Sarsour’s eagerness to attach her noxious views about Israel and Jews to the BLM moment has brought her increased visibility. Her and Mallory’s arrests this week no doubt brought in a lot of earned media and donations for their organization. But BLM leaders and the many corporations and individuals who have been donating money to the cause might want to consider whether anti-Semites like Sarsour are really the allies they want to embrace. 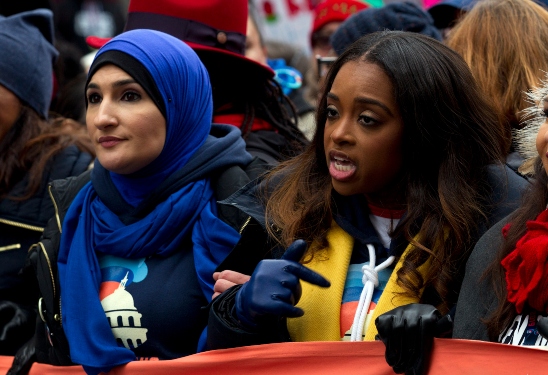