What does “Defund the Police” mean?

There have been numerous and often contradictory answers to the question since the slogan gained traction this spring, in the aftermath of the killing of George Floyd and the protests it spawned. Liberal media outlets like Vox insisted, “It’s not as radical as it sounds,” insisting that “defunding” was merely an effort to reallocate money to social and mental health services. Others eagerly proclaimed, “Yes, we mean literally abolish the police.” And elected officials in cities like Minneapolis tried to split the difference by pledging to “end policing as we know it.”

In other words, to say that ideological confusion reigns among Defund the Police supporters would be an understatement. When NPR interviewed two proponents of defunding this summer and posed the question of how communities could respond to violent crime without police, both guests replied with vague, feel-good statements, but also revealed their starkly different understandings of human behavior.

“I think this is about a process of looking concretely at what police do and trying to find alternatives that don’t rely on violence as the mechanism for producing safety,” said Alex Vitale, the author of The End of Policing. “When we look at wealthy suburban communities, we don’t see police on every street corner managing the problems of those communities.”

Lawyer Derecka Purnell, by contrast, suggested we rethink the very concept of crime. “What we consider crime and harm, first of all, is a social construct,” she said. She also embraced what might be called the Les Miserables principle of crime (a favorite canard of Alexandria Ocasio-Cortez, too): “Places where there’s less inequality, places where there’s a more egalitarian society, there’s less harm and less crime,” she said. “So you don’t have to worry about someone breaking into your house because there is no reason for someone to break into your house and take from you because they’re not doing it out of economic desperation.”

For both, Defund the Police meant whatever they wanted it to mean.

So this week, when former president Barack Obama appeared on Peter Hamby’s Snapchat show and said unequivocally that “Defund the Police” had cost Democrats votes in the 2020 elections, his remarks revived the debate over the meaning of the slogan. “You lost a big audience the minute you say it, which makes it a lot less likely that you’re actually going to get the changes you want done,” Obama said. “The key is deciding, do you want to actually get something done, or do you want to feel good among the people you already agree with?”

Obama is not the first Democratic leader to state the obvious; Rep. Jim Clyburn said something similar on “Meet the Press,” blaming the slogan for Democrats’ poor down-ballot performance. But Obama’s words had an immediate and clarifying effect on the Defund the Police debate; as progressives’ response to his remarks revealed, the pretense that Americans had simply misunderstood a well-meaning but non-radical slogan became impossible to sustain.

Representative-elect Cori Bush from Missouri tweeted, “With all due respect, Mr. President—let’s talk about losing people. We lost Michael Brown Jr. We lost Breonna Taylor. We’re losing our loved ones to police violence. It’s not a slogan. It’s a mandate for keeping our people alive. Defund the police.”

Rep. Ilhan Omar was equally forceful. “We lose people in the hands of police,” she wrote. “It’s not a slogan but a policy demand.” Fellow Squad member Ayanna Pressley was also upset, writing, “The murders of generations of unarmed Black folks by police have been horrific. Lives are at stake daily so I’m out of patience with critiques of the language of activists. Whatever a grieving family says is their truth.” And petty theft expert AOC weighed in with a tweet-storm scolding Obama for failing to recognize that the whole point of Defund the Police was “to make [people] uncomfortable.”

What their reactions make clear is that if activists had ever really meant “reform,” they would have embraced “Reform the Police” or “Demilitarize the Police” or some other phrase that wasn’t explicitly focused on pulling resources away from (hence, weakening) law enforcement. They also wouldn’t rely on emotional appeals meant to promote an ideological narrative at the expense of facts.

When Cori Bush invokes Michael Brown, who attacked a police officer and whose death at the hands of that officer was ruled justifiable by the Obama Justice Department, she is deliberately ignoring the truth in order to appeal to the emotions of her followers and constituents. When Ayanna Pressley invokes “their truth” and “their justice” to describe the victims of police use of force, you can be sure she has no interest in either. Rather, she is making an emotional appeal intended to shift the narrative, just as activists have done with “Hands Up Don’t Shoot,” another lie whose damaging half-life is still being felt in debates over police and the use of force.

Well-intentioned advocates of police reform would also make a concerted effort to distinguish themselves from more radical activists, particularly in the Black Lives Matter movement, which calls for the outright abolition of law enforcement and prisons. And they would engage with the reality of recent crime statistics in cities like Minneapolis, New York, and Chicago, which have seen a disturbing and steady increase in homicides and other violent crimes over the past few months, often after Defund efforts have been enacted by local elected officials.

Years of scholarly research has shown that the presence of police—particularly beat cops who know the neighborhoods they patrol—leads to a reduction in crime. A recent study of the Dallas Police Department demonstrated the powerful effect of this very simple tool. As Charles Fain Lehman summarized the study in City Journal, “When it comes to how cops control crime, simply walking the beat is one of the most powerful tools available . . . It adds to the already voluminous evidence that more cops reduce crime, while fewer cops increase crime—a grim sign for progressive cities currently slashing budgets and shedding officers.”

Contrast this evidence with the Squad’s emotional, inflammatory appeals. Cori Bush claims that defunding the police is a “mandate for keeping our people alive.” Setting aside the racial signaling of the phrase “our people” (doesn’t she represent all of the people in her district?) it is in fact minority voters who have been the most outspoken about wanting more of a police presence, not less, in their neighborhoods.

Activists like Bush, who claim to represent those citizens’ interests while pursuing policies that threaten their safety, would do well to read less Karl Marx and more Thomas Hobbes (and a great deal more current research on the effects of policing on crime).

And Democrats would do well to think about the trajectory their party is taking as it prepares to reclaim the White House. When Obama is deemed a sell-out for stating simple facts about Americans’ views of law enforcement, it’s a clear sign of how much more radicalized both the tone and policy proposals of the Democratic Party have become on the issue of law enforcement. 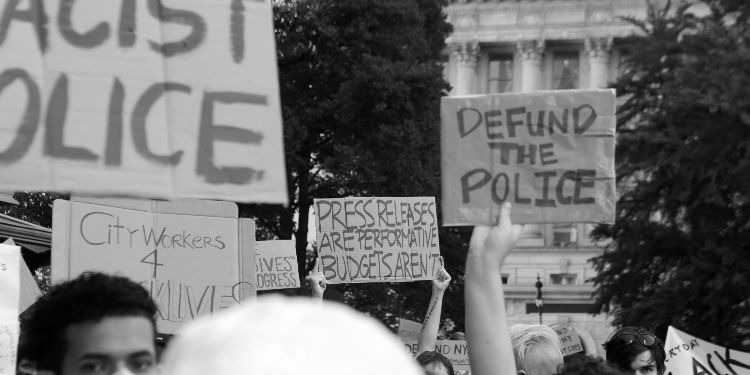