Like the (probably untrue) stories about how Eskimos used to push their elderly members off to sea on an ice floe when they became too old and infirm, Democrats seem a little too eager to force some of their aging politicians and judges off the public stage.

This week, MSNBC’s Joy Reid asked embattled California governor Gavin Newsom, “If Dianne Feinstein were to retire, will you nominate an African American woman to restore the seat that Kamala Harris is no longer in the Senate? And do you have a name in mind?”

Newsom responded, “We have multiple names in mind, the answer is yes.”

Feinstein, who is 87 years old and has represented California in the Senate since 1992, was having none of it. “There’s nothing to it,” she told CNN, reiterating that she had no plans to retire before her term is over in 2024. “I have not discussed that with anybody, nobody has asked me any questions about it,” she stated.

They might not be speaking to her directly about it, but plenty of Democrats have been not-so-subtly hinting for years that she should retire. Progressive Democrats, in particular, have been unhappy with Feinstein because of her consistent opposition to eliminating the Senate filibuster. Asked about it again this week, she told reporters that eliminating the filibuster could backfire on Democrats if and when the GOP returns to the majority. “I am concerned. That is a factor,” she said. “One of the reasons why I’m hesitant.”

Activists are also unhappy with the way she handled Christine Blasey Ford’s allegations about then-Supreme Court justice nominee Brett Kavanaugh in 2018. As Politico reported at the time, activists and other Democrats were angry that Feinstein didn’t immediately publicize the allegations, even though Ford had asked Feinstein’s office to keep the matter confidential (Ford later told her story to the Washington Post).

But it’s the argument they chose to make—insinuating that Feinstein was non compos mentis—that is notable. During the Kavanaugh hearings, New Yorker reporter Jane Mayer claimed that Feinstein’s own staffers were concerned about her cognitive abilities. “They say her short-term memory has grown so poor that she often forgets she has been briefed on a topic, accusing her staff of failing to do so just after they have,” she wrote. Mayer also claimed that then-minority leader Chuck Schumer had “serious and painful talks” with Feinstein and encouraged her to step aside “with her dignity intact.”

Senility rumors circulated again immediately after the death of Supreme Court Justice Ruth Bader Ginsburg last year. “Feinstein, the oldest member of the Senate, is widely respected by senators in both parties, but she has noticeably slowed in recent years,” Politico reported, adding that “interviews with more than a dozen Democratic senators and aides show widespread concern over whether the California Democrat is capable of leading the aggressive effort Democrats need against whoever President Donald Trump picks to replace the late Justice Ruth Bader Ginsburg.”

Her colleagues refused to go on the record with their supposed concerns, but they were happy to anonymously complain to reporters: “She’s not sure what she’s doing,” one Democratic senator told Politico. Another said, “She can’t pull this off.”

It’s not just aging Democratic senators who are being hustled offstage. After unsuccessful attempts by Democrats to get Justice Ruth Bader Ginsburg to retire when President Obama was in office, they have taken up the forced-retirement banner again with Justice Stephen Breyer, who is 82.

“Democratic control of the U.S. Senate will make it easier for President-elect Joe Biden to fulfill his campaign promise to appoint the first Black woman to a Supreme Court seat,” reporters for Bloomberg Law noted in January. “That’s putting pressure on Justice Stephen Breyer, 82, to step down and avoid having the three-justice liberal minority potentially shrink to two should Republicans regain control of the Senate in 2022.” CNN was less subtle. An opinion piece by its legal analyst, Joan Biscupic, stated, “Stephen Breyer gifted the chance for a liberal successor—when will he take it?” Note she says when, not if.

The Democratic effort to force aging pols and justices into retirement isn’t quite senicide (like that committed by Governor Andrew Cuomo against nursing home residents with his COVID policies in New York). It’s more akin to assisted political suicide.

But it’s not without its perils as a political strategy. Much of the criticism levied against Feinstein, for example, echoes criticisms that have also been made of Biden, who is 78 years old: “Feinstein sometimes gets confused by reporters’ questions, or will offer different answers to the same question depending on where or when she’s asked. Her appearance is frail. And Feinstein’s genteel demeanor, which seems like it belongs to a bygone Senate era, can lead to trouble with an increasingly hard-line Democratic base uninterested in collegiality or bipartisan platitudes.”

The Democratic leadership is also very old. The average age of the Democratic House leadership is 70 (compared to 53 for Republicans); Speaker of the House Nancy Pelosi is 80; her lieutenants Steny Hoyer and James Clyburn are 81 and 80, respectively. Senator Majority Leader Chuck Schumer is a comparatively spry 70.

The liberal mainstream media occasionally comments on the age of Democratic leaders: New York magazine lamented the “Gerontocracy of Democratic Party Leadership” back in 2016, as did The New Republic in 2019 (“The Democrats are Too Old”), but they did so as part of an effort to paint Feinstein as senile and thus incapable of doing activists’ bidding during Amy Coney Barrett’s confirmation hearings, not as a matter of general concern.

“Republicans were stealing another seat” on the high court, TNR claimed, and “Feinstein conducted the hearings as if they were occurring in a normal political environment.” She even had the temerity to hug her colleague Lindsey Graham, which was, in the liberal media’s eyes, a clear sign of senility.

In other words, Democrats prefer to ignore the age issue until it becomes useful as a justification for pushing out someone who is no longer useful to the party.

It’s a cynical tactic that will continue to create odd political moments, such as Nancy Pelosi shimmying after the passage of the recent COVID relief bill or older Democratic leaders kneeling in kente cloth in support of Black Lives Matter (and struggling to get up afterward). Those displays make older Democrats paradoxically seem less like vigorous leaders and more like advertisements for assisted living communities that strenuously highlight all of the things “active seniors” can still do.

The next time a Democratic politician makes an anonymous observation about the age or vigor of a colleague with whom they disagree, be skeptical. The remarks are made to reporters as if in sorrow, but the message is about as subtle as a shiv in the prison yard. 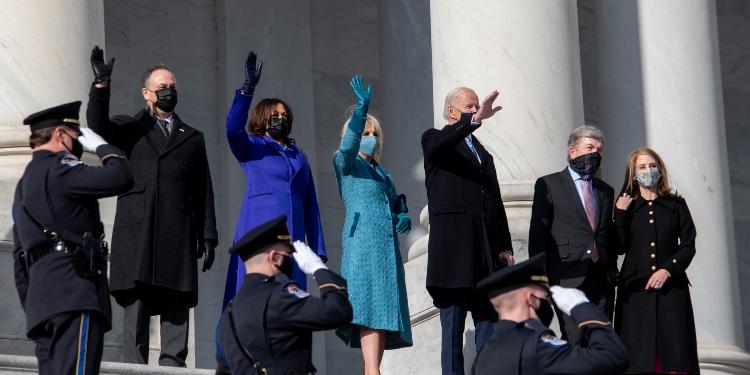