When the Democratic Congressional Campaign Committee (DCCC) announced that it had hired Dyjuan Tatro as its new “senior adviser for diversity and inclusion,” the New York Post reported that Tatro had an unconventional resume. Tatro had served time for acting as a “triggerman for the Original Gangsta Killas street gang that terrorized Albany.” He also confessed to shooting two people as well as a “razor slashing” of another victim, in addition to dealing drugs and trafficking in crack cocaine.

But Tatro had also turned his life around in prison, earning a bachelor’s degree and serving as an advocate for the formerly incarcerated once he was released. (Tatro was featured in a 2019 PBS documentary, “College Behind Bars,” about inmates who earn degrees in prison). The criticism from New York State Republican Party chair Nick Langworthy—that Tatro, a formerly “murderous gang member,” shouldn’t be given another chance—was ungracious and sends the wrong message about how society should treat the formerly incarcerated.

It’s not the first time Tatro has been outspoken in his views about law enforcement. During the spring and summer riots and looting sparked by the killing of George Floyd, Tatro unequivocally praised the lawlessness and destruction as a “vital form of social protest.” In a response to a tweet by Georgetown Law Professor Shon Hopwood, who asked, reasonably, “Don’t understand why we can’t say that significant police reform is vitally needed, while at the same time condemning violent and looting protesters,” Tatro tweeted, “I’m sure you want to seem smart & reasonable, but, as a BLACK MAN, I’m here to inform you that you sound insensitive & tone-deaf. In the least, you could have called for those cops to be prosecuted. This is not a reform moment. You are not being helpful.” He added, “I don’t understand why you can’t CONDEMN VIOLENT POLICE & acknowledge LOOTING as a VITAL form of social PROTEST.”

And in a now-deleted tweet from June, he compared cops to Nazis, tweeting, “To all those people who want to reform the police because all cops aren’t bad, should we just go ahead and revive Nazism because all Nazis weren’t bad? I didn’t think so. Case closed.”

The case is far from closed.

Consider what is happening in Minneapolis. This past summer, in the wake of riots and protests, the city council, caving to the demands of activists, defunded its police force. The resulting surge in violent crime could not be ignored: As Minnesota Public Radio reported, “The number of reported violent crimes, like assaults, robberies and homicides are up compared to 2019, according to MPD crime data. More people have been killed in the city in the first nine months of 2020 than were slain in all of last year.

Property crimes, like burglaries and auto thefts, are also up. Incidents of arson have increased 55 percent over the total at this point in 2019.” Last week, the city announced that it would spend $6.4 million to hire more police officers to deal with the crime surge (the police force is down 200 officers in the wake of the defunding).

As the city prepares for Officer Derek Chauvin’s trial in the killing of George Floyd, with activists threatening more protests and disruptions, city officials are scrambling to find additional security to protect residents (the Minnesota National Guard has already been informed that it will be needed for security).

Congressional Democrats’ embrace of people like Tatro is evidence of a broader problem with how Democratic leaders talk about law enforcement. The deserved praise for law enforcement’s bravery in the wake of the January 6 attack on the Capitol was an exception for Democrats; for months in the wake of Floyd’s killing, Democratic Party leaders, like Nancy Pelosi, have called law enforcement “storm troopers” and killers. Further, they overlooked the more radical rhetoric of the prison abolition movement within the progressive coalition, no doubt seeing law enforcement’s denigration as politically useful while Donald Trump was still president.

Despite a vow to change the tone in Washington, President Joe Biden’s administration has shown a willingness to embrace those who promote vitriol directed at law enforcement (while the mainstream press has turned a blind eye to those choices). Consider Jalina Porter, who stated that she was “proud to stand as the State Department’s first black woman deputy spokeswoman” after the Biden administration named her to the spot. As the Free Beacon’s Adam Kredo reported, she should perhaps be less proud about her past anti-law enforcement statements. Among them, her 2016 claim that the “largest threat to U.S. national security are U.S. cops,” and her 2020 promotion of an anti-police video, which recommended that the Los Angeles Police Department should “suck my dick and choke on it.”

Democrats have thus far ignored both the nationwide violent crime spike and the ongoing protests against cops. Last week in New York City, a Black Lives Matter protest against police turned violent, leading to several arrests and injuries to law enforcement (protestors also attacked a New York Daily News photographer). If Congressional Democrats really care about “inclusion,” they shouldn’t elevate people who indiscriminately slander law enforcement as white supremacists and Nazis, especially after those same officers risked their lives to protect lawmakers on the Hill. Doing so not only undermines public trust in law enforcement but risks alienating voters who are worried about the significant increase in violent crime across the country. 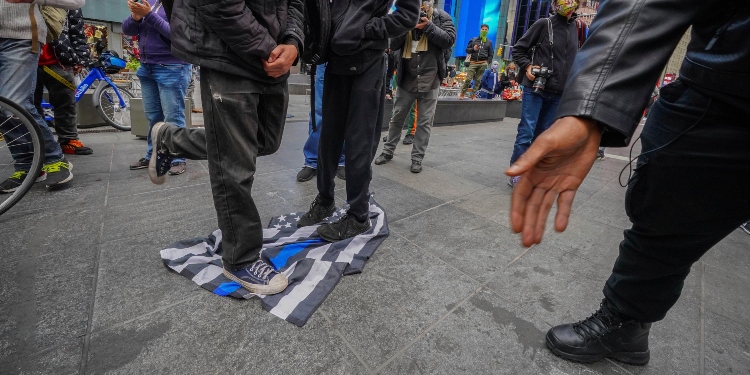