In a recent essay in the New York Times, Elisabeth Anker, a professor of American Studies, described a new scourge she calls “ugly freedoms.”

If you were unaware that freedom could be ugly, Ms. Anker is more than happy to enlighten you. Freedom is a suspect enough idea that she puts the word in scare quotes. Or rather, freedom is suspect (or “ugly”) when it is invoked by anyone whose views are to the right of her own. Anker cites Republican governors lifting mask mandates and parents demanding greater transparency from school systems as examples of so-called “ugly freedoms.”

“Each of these actions used the language of freedom to justify anti-democratic politics,” Anker argues. These “ugly freedoms” are “used to block the teaching of certain ideas, diminish employees’ ability to have power in the workplace and undermine public health.” According to Anker, these ideas represent an “exclusionary” and “coercive” view of freedom. That’s right: Lifting mask mandates and giving parents more control over what their kids learn in school is now considered coercive.

It is perhaps not a surprise to learn that Anker’s essay is drawn from a book titled Ugly Freedoms, which claims to critique “liberal American democracy, outlining how the emphasis of individual liberty has always been entangled with white supremacy, settler colonialism, climate destruction, economic exploitation, and patriarchy.”

This is par for the course in academia, in which the field of American Studies positions itself vis-à-vis the traditional scholarly study of history as the rebellious, theory-and-systems wielding upstarts speaking truth to power. They have long postured as academia’s enthusiastic “myth busters” (one popular American Studies text is called The Myths That Made America), and its advocates never met a post-structuralist theory they didn’t embrace. Forget the tedious crafting of nuanced narrative based on years of studying manuscripts in the archives; today’s Americans Studies professors prefer to cherry-pick examples from secondary sources and apply a thin veneer of intersectional theory and progressive politics to their work.

And Anker does not disappoint, giving the idea of freedom the full 1619 Project treatment: In the introduction to her book, she describes how she “interrogates practices of American freedom to examine the oppressions they legitimate as principled ideals.” Thus, the colonists’ war for independence from Britain is described not as a revolution for liberty, but the practice of “ugly freedom.” After all, “this liberation was only possible because of widespread land theft from indigenous peoples who had inhabited the land upon which they declared independence.”

“Freedom is thus, at once, the highest ideal in American politics and also the most brutal,” Anker claims. In other words, this historical project is a tear-down, not a fixer-upper. Anker emphasizes that she chose the ascription “ugly” because she sees the goal of her work as “gnawing away at the ceaseless affirmation of freedom’s virtue, challenging the veneration of actions produced under its mantle.”

Fair enough, if bashing American ideals (excuse me, “myth-busting”) is your thing. The only problem? Her alternative to ugly freedom is nothing new; it’s merely progressive statism dressed in the latest academic jargon. And her grasp of contemporary and historical facts is blinkered.

Take, for example, her critique of people who oppose mask mandates, claiming the freedom to assess COVID risks for themselves. “The ‘health freedom’ of the anti-mask protestors led to the rapid spread of COVID-19 across populations and some of the highest COVID death rates in the world,” Anker claims. “Anti-mask protestors did not call for a freedom that would prevent mass death by demanding free healthcare, or housing for all people, or robust public resources to fund vaccines and solutions,” she says. Which is the greater sin? Refusing to mask up, or refusing to embrace a progressive policy agenda?

Anker condemns the unmasked and the “necropolitical underpinnings of their ugly freedom,” claiming the “freedom of mask-free masculinity sacrifices the lives of the elderly and immunocompromised, as well as poor, minority, and immigrant populations.” These people “practice a freedom to expose others to death, and indeed to be free from them.” Never mind the evidence that masking policies did little to change the course of the pandemic (and states with strict mandates often had worse outcomes than those with them).

One could plausibly ask how her interpretation of freedom (and particularly freedom to make decisions about one’s health) would apply to, say, abortion? Or gender reassignment surgery? Plenty of theorists on the other side of the political aisle from Anker have argued that the “health freedom” provided by access to abortion is also tantamount to murder, and the state should prevent it. Would she support such intervention to combat this expression of “ugly freedom?” Probably not.

Anker seems to only find evidence of ugly freedom’s “domination” wherever far-left policies are thwarted, or where people are made to bear the consequences of their choices. “Evictions, and their support in legal policies and law enforcement, show how the legacies of dispossession, mastery, and patriarchy are not historical embarrassments but present structures of power that continue to be practiced as freedom,” she writes. “The freedom of a landlord’s property ownership reaches full expression in the life-damaging power of eviction.” Anker is arguing that true freedom is the freedom to live freely on someone else’s property without paying rent (it will surprise no one that she is no fan of the “free” market).

Anker also dislikes guns. The right to own one is another one of those “ugly freedoms” that need controlling (as with all her proposals, one assumes the state is the enforcer of the limitations she seeks to impose). Gun ownership “allows owners, especially the white men who make up a vast majority of the gun-owning population, the promise of control over life and death on their own terms,” she complains. But like much of Anker’s critique, her simplistic statements gloss over complicated realities—realities she is not eager to engage as they undermine her narrative, in this case of a nation of murderous white men with guns.

As researchers at the Brookings Institution found, “The vast majority (77 percent) of white gun deaths are suicides; less than one in five (19 percent) is a homicide. These figures are nearly opposite in the black population, where only 14 percent of gun deaths are suicides, but 82 percent are homicides” (nearly all of which are committed by other black men).

If there is a problem with guns, it is not gun ownership (or the constitutional right to bear arms); it is a problem of gun cultures among different groups. Both high suicide and high homicide rates point to major social problems. Neither can be understood nor solved by Anker’s reductionist view that the right to own a gun is an “ugly freedom” enjoyed only by white men.

Anker’s claims about ugly freedoms—“Evictions, anti-mask protests, and gun carrying entail practices of freedom that only exist through violent power unevenly distributed to the people who already have relatively higher access to it”—don’t withstand scrutiny. (They also produce a lot of academic nonsense like this: “Alongside practices of individual responsibility and human exceptionalism that further climate change, we can also find experimental freedoms in toxic waste zones and dank bodily registers like guts, which emphasize distributed agencies across many species and nonliving matter”).

Freedom is freedom. True, it has not always extended to everyone equally and it can be invoked to justify misguided political agendas. Like free speech, it sometimes gives others the power to say and do things with which you might disagree. Each generation of Americans questions anew the meaning of freedom. In many ways, the history of our nation is a history of these crucial battles over civil liberties and the extension of freedom to previously excluded people, and of the constant tension between the rights of the individual and the power of the state.

But there is no caveat necessary when discussing the ideal of freedom; just ask someone who has lost theirs or has lived in a country where it is not guaranteed.

Efforts such as Anker’s to rewrite the past to suit present political goals are nothing new, but they are always worth resisting. Such blatantly ideological attempts to redefine values like freedom by recasting them as stalking horses for oppression teach us nothing about the past nor help us better understand the present. As the sages of Team America once noted, Freedom isn’t Free. But it’s not ugly. 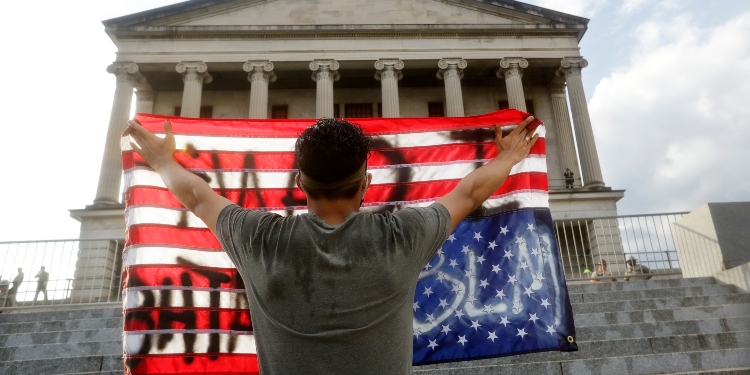