President-Elect Joe Biden’s initial response to the insurrectionary violence on Capitol Hill on January 6 was strong and steadying. He condemned the violence and said President Trump should denounce it publicly. In stark contrast to Trump’s behavior, Biden did what a political leader should do at a time of national crisis: Project calm and call for a de-escalation of tensions.

But the next day, his message had shifted. “No one can tell me that if it had been a group of Black Lives Matter protesting yesterday,” Biden said, “they wouldn’t have been treated very, very differently than the mob of thugs that stormed the Capitol. We all know that’s true, and it is unacceptable.”

Vice President-elect Kamala Harris repeated the spurious claim. “We have witnessed two systems of justice,” she said. “One that let extremists storm the U.S. Capitol yesterday, and another that released tear gas on peaceful protestors last summer. It’s simply unacceptable.”

It is the narrative around which the incoming Biden administration and its media allies are coalescing. Biden’s nominee to lead the Department of Housing and Urban Development, Marcia Fudge, told USA Today, “The Capitol police were unprepared, ineffective and some were complicit. All of them should be held to account.” She added that there’s “no question” the response was different than at last year’s Black Lives Matter protests at the Capitol. “There is a double standard,” Fudge concluded.

Biden and Harris won the White House with a bland but ultimately compelling political message, in contrast to the turmoil of the Trump years: Reunify the country. It says something worrisome about their political priorities that, at a moment when unity is most needed, they chose to highlight racial division.

Worse, in taking this course, Biden also promoted a false narrative about law enforcement. By issuing this vague and hypothetical indictment, Biden advanced an article of faith among progressive activists that all cops are motivated by anti-black animus, and that the Capitol Police would have reacted more harshly had the mob been composed of minorities. The events of January 6 as we currently understand them suggest otherwise.

Amid Wednesday’s siege of the Capitol, police ended up shooting and killing one protestor (a white woman) and have so far arrested nearly 70 more. More arrests are likely, since law enforcement captured clear footage of the perpetrators. Three other protestors died as a result of medical emergencies.

Contra Kamala Harris, the police did deploy tear gas to stop the mob. According to reports, as many as 60 Capitol Police officers were injured and 15 were hospitalized after engaging in hostilities with and being overwhelmed by the mob. Tragically, one Capitol Hill police officer, Brian Sicknick, died after sustaining injuries in the line of duty.

Compare this to the months of riots and demonstrations after the killing of George Floyd. During that time, dozens of people were killed in the rioting but only one protestor died at the hands of law enforcement. As well, only a tiny fraction of those responsible for violence and looting were arrested, and many of them eventually saw their charges dropped.

In the two-night melee of rioting and looting in Minnesota this summer, for example, only 45 people total were arrested. VP-elect Harris even called on Americans to donate money to bail them out; the money ended up allowing rapists and other violent felons to escape jail time. This happened in cities all over the country.

If our justice system were as biased and reflexively punitive as Biden and Harris claim, the people whose wanton destruction of their communities led to numerous deaths and billions of dollars in property damage wouldn’t have walked free.

On January 6, a combination of factors led to disaster. Trump was derelict in his charge by failing to have National Guard troops present in force in the District, yes. But Washington D.C. Mayor Muriel Bowser’s insistence that no additional federal law enforcement presence in the city was necessary meant that the law enforcement personnel were going to be outnumbered if the long-planned demonstration turned violent. If systemic racism is to blame for how the mob was treated, where do the actions of D.C.’s Democratic, African-American mayor fit into that equation?

Unlike many Democrats, candidate Joe Biden strongly condemned the violence and destruction that occurred over the summer. Which is why it is odd to see him parroting BLM talking points now.

The reason the events at the Capitol on January 6 were so horrifying is that it was an attack (encouraged by a sitting president) on our government—a government that represents all of the people, and which was in the middle of certifying an election. An overwhelmed and underprepared team of law enforcement officers did the best they could to control the mob, and one lost his life in the process.

There can be no doubt there was a racist element to these protests. If the waving of Confederate flags and the horrifically racist and anti-Semitic garb worn by some in the mob are any indication, some of the animosity that fueled them is grounded in white nationalist ideology. That is reprehensible and should be thoroughly condemned—a task that, unfortunately, not all elected officials seem capable of doing. But it would be a mistake to try to marginalize those who seek racial division by encouraging racial division.

Trump’s “stop the steal” incitement to violence was a degradation, one for which he should pay with impeachment and removal during his last days in office. For Biden and Harris to use this moment to double down on misguided, racially divisive ideology rather than encouraging the country to come together is not just worrisome. It is an example of poor leadership when leadership is what is needed most. 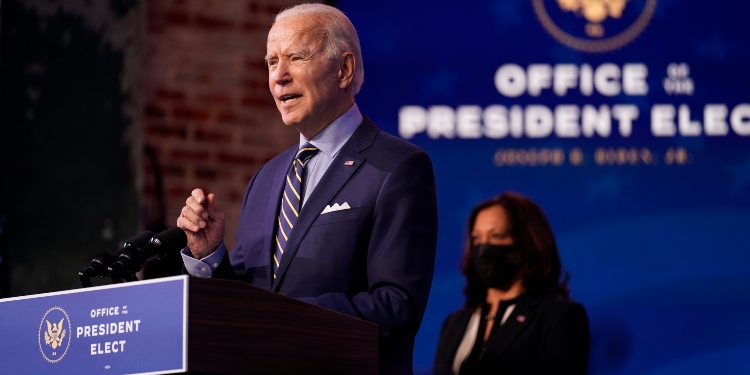