In an episode of the NBC sitcom 30 Rock, the narcissistic actress Jenna (played brilliantly by Jane Krakowski) and her boyfriend Paul (Will Forte), who had spent their relationship thus far indulging in one weird fetish after another, suddenly find themselves lapsing into a comfortable, mundane existence. Horrified at the thought that they were like any other couple, they recast activities like going to bed early and grocery shopping as an entirely new fetish they called “normaling.” (Not surprisingly, their attempt at relationship normcore ends when they are mocked by their normal peers).

The fetishization of the normal appears to much less comic effect in a recent, flattering profile of socialist feminist scholar Silvia Federici in the New York Times Magazine. Federici, we are told, “is a longtime advocate of the idea that domestic work is unwaged labor and was a founder of the Wages for Housework movement in the early 1970s.” Housework, Federici argues, “is a form of gendered economic oppression” and “an exploitation upon which all of capitalism rests.”

Federici isn’t just displeased with housework. “Nearly everything,” she argues, “has become ‘enclosed’ within capitalism: not just property and land but also our bodies, our time, our modes of education, our health, our relationships, our attention, our minds.” Her solution to this totalizing force is something she calls “commoning.” The Times describes the practice as follows: “Instead of your hiring a handyman, a neighbor might come to your house to help install your ceiling fan; in exchange, you might help him, or someone else, with his taxes or pet-sitting or garden work.”

If, like most people, you read this description and think, “Isn’t that just being a decent person and helpful friend and neighbor?” you clearly haven’t been properly steeped in radical socialist economics. According to Frederici, “commoning” is “a powerful and rare experience as that of being part of something larger than our individual lives, of dwelling on ‘this earth of mankind’ not as a stranger or a trespasser, which is the way capitalism wishes us to relate to the spaces we occupy, but as home.”

Whatever “commoning” is, it, along with Federici’s argument in favor of wages for housework, is becoming more mainstream. As the Times notes, “In the last year, she has been cited over and over in popular publications—from The New Yorker to The Atlantic to The Cut to Teen Vogue.”

“Everyday life is the primary terrain of social change,” Federici says, and it’s worth examining what she means by this: That caring for one’s children and home is exploitive; that any pleasure one might derive from doing so is merely an expression of false consciousness; that society owes those who perform such “reproductive labor” not merely relief from the “second shift” but wages for doing such work at all. As Samuel Hammond of the Niskanen Center recently told the Times, “I do think it’s a market failure in capitalist economies that there isn’t a parenting wage.”

Such proposals come at the same time that many on the progressive left are also advocating for a Universal Basic Income because, as Jamila Michener, co-director of Cornell’s Center for Health Equity, told Times columnist Ezra Klein, “There’s no natural dignity in work.” This is a departure from the message President Joe Biden promoted on the campaign trail. As he said during a Democratic primary debate, “My dad used to have an expression. He said, Joe, a job is about a lot more than a paycheck. It’s about your dignity. It’s about respect.”

Is dignity to be found in paying people for the tasks they perform in their private lives? Or paying them for raising their children (as even Republican Senator Mitt Romney has suggested with his recent child allowance proposal?) Or can dignity only occur when the government pays everyone an income regardless of whether or not they work at all?

One need not idealize the Sisyphean tasks of daily life—the cleaning, cooking, and caring for others—to understand that doing them has a worth not measurable in dollars. But context matters. Socialists like Federici would prefer that the context always be political. In their view, no private act is without political significance. Therefore, nothing one chooses to do in one’s home should be free from government intervention (and ideally, payment).

In practice, Federici’s approach suffers from the same totalizing worldview as the capitalists she excoriates.

For socialists like Federici (and for an increasing number of progressive activists who embrace such ideas), private acts can be made meaningful only if they are put to political purpose, namely, the destruction of capitalism. As Federici argued in a 1975 essay, “Wages Against Housework”: “To say that we want wages for housework is to expose the fact that housework is already money for capital, that capital has made and makes money out of our cooking, smiling, [expletive that describes sexual intercourse].”

The current debate about wages, housework, “commoning” and the dignity of labor does create an opportunity for conservatives to reiterate their values if they are willing to take it. A common theme emerges in these debates that has nothing to do with government payment for private domestic labor, or a universal basic income, or even the creation of “commoning” socialist utopias. It’s the importance of bonds of community that develop organically, steeped in a particular place, or among people who share specific beliefs, who have made a commitment to care for one another.

Republicans and Democrats can wrangle over policy solutions in the form of tax credits or child payments or universal basic incomes. But if you lack a sense of community (as far too many Americans do, particularly after a year of pandemic lockdowns and the ensuing retreat from public space), a check from the government will not fill that void. 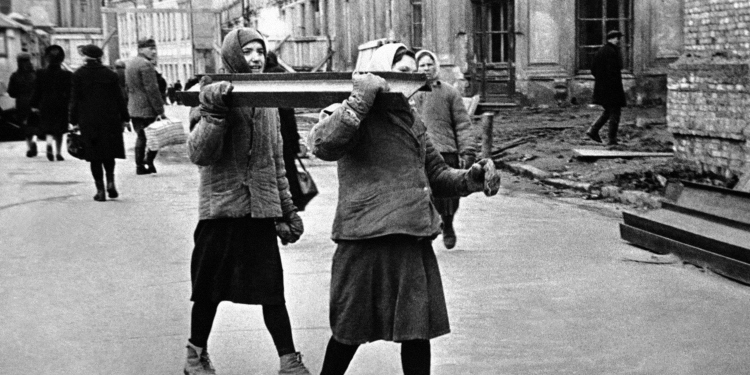