This week, an enlarged “Squad” of progressive Democratic lawmakers, including newly-elected U.S. House freshmen Cori Bush and Jamaal Bowman, announced plans to protest DNC headquarters “demanding bold action to address the COVID pandemic, the economic crisis, and accelerating climate change.” The announcement included a promise that also describes both the strengths and weaknesses of the Squad: “STRONG VISUALS.”

Organizing a rally during a pandemic in a city experiencing a spike in COVID cases creates a strong visual, although perhaps not the one that the group intends. Like the hypocritical behavior of other prominent politicians, the Squad evidently believes restrictions like social distancing and avoiding large gatherings don’t apply to them.

Their real purpose in protesting at the DNC is to put pressure on the incoming Biden administration to fill his cabinet and government agencies with progressive activists of whom they approve: “The rally will push Biden to appoint a corporate-free cabinet and an administration staffed with personnel committed to addressing the climate threat,” their statement read. “We’re asking you to show up, Joe Biden,” Representative-elect Bush said at the rally, standing in front of bright yellow banners that read, “Biden Be Brave,” and “The People Have Spoken.”

The people have, indeed, spoken. And if the results down-ballot are any guide, the Squad and its newest members like Ms. Bush are deliberately choosing to ignore what the people said.

“We’re going to make sure the Biden administration sticks to our timeline,” Rep. Tlaib said at the rally, speaking of the money they want to see spent on the Green New Deal and other progressive projects. But she offered no strategy for achieving that. During his campaign, Joe Biden repeatedly distanced himself from the Green New Deal, bans on fracking, the “Defund the Police” movement, and other progressive pet causes, correctly reading the public mood. Thus far, he has staffed his transition team with the typical self-enriching flotsam of Beltway lobbyists and corporate types. Most upsetting to the Squad, he hired Rep. Cedric Richmond, who has deep ties to the oil and gas industries, as a senior adviser.

Though the Squad’s DNC rally will no doubt garner lots of likes and retweets on social media, it’s unlikely to usher in legislative success unless Democrats win both Senate seats in Georgia in the upcoming special election.

As is now well-known, the original Squad—Ocasio-Cortez, Rashida Tlaib, Ayanna Pressley, and Ilhan Omar—each developed their own cults of personality. That may have landed them on the covers of many magazines, but it gave them little in the way of real power on Capitol Hill. Their brand of self-referential politics, which leans heavily on carefully cultivated social media presences and the deployment of stylishly radical catchphrases of little substance, were popular as an antidote to Donald Trump, but can only go so far in an era of divided government.

At the DNC rally, for example, AOC conflated the progressives’ legislative agenda with . . . herself: “I never ever saw any elected representation that even really thought of me let alone looked anything remotely like me,” she said, evidently unaware of the many women of color who had served in the House long before she started streaming Instagram stories. “To think that we could fast forward and have champions like Mondaire Jones, Jamaal Bowman, and Cori Bush … it shows that these issues are not a fluke,” she said. Cori Bush also embraced solipsism and hyperbole, stating, “When we don’t act, people who look like me die.”

Given the public soul-searching that many Democrats in purple districts have been doing in the weeks since the election, in which Democrats farther down-ballot and in statewide elections were routed, the tone of the Squad’s rally was blinkered. They don’t have their finger on the pulse of the country; they were just lucky enough to run and win safe seats (you could run a Bratz doll with a D next to its name and win in AOC’s district). The fact that they want Democrats who don’t have that luxury to “be brave” and adopt their agenda suggests they have no interest in compromise or deal-making.

Instead, like the professional activists they were before winning office, what they do best is make demands.

Cori Bush’s Twitter feed offers an instructive example. In a typical statement, she writes, “It’s simple, really. We want to cancel student and medical debt because we believe education and healthcare are human rights.” Bush also believes that “cash bail is ransom” and that the way to improve the criminal justice system is to get rid of it: “decarcerate,” and “abolish private prisons” are on her wish list.

Ilhan Omar is equally insistent that there should be no “getting back to basics” for Democrats, as she said at the DNC rally; instead, they must embrace the progressive left’s agenda. She has repeatedly told reporters she expects Biden to pivot to the left now that he has won the election.

But when every item on that legislative agenda (abolishing rent, abolishing the police, universal health care, canceling debt) is described as a “human right,” and everyone who opposes such policies is labeled a racist or a fascist, there isn’t a lot of room for persuasion or compromise.

Will the Squad’s overreaching force a reckoning in 2022? Perhaps. Even in her safe seat, Ilhan Omar ran 16 percent behind Biden, which in her district means that more than 70,000 people who voted for Biden refused to vote for her. And as Thomas Edsall notes in the New York Times, moderate Democrats like Abigail Spanberger have been outspoken in their criticism of radical slogans like “Defund the Police.” To hear her tell it, the progressive left has done real damage to Democratic efforts to win over voters in tough districts.c

Then again, the Squad’s response to criticism from moderates in their own party was, not surprisingly, immoderate and infused with the identity politics that so many voters rejected in this election. As Rashida Tlaib said, “To be real, it sounds like you are saying stop pushing for what Black folks want.” 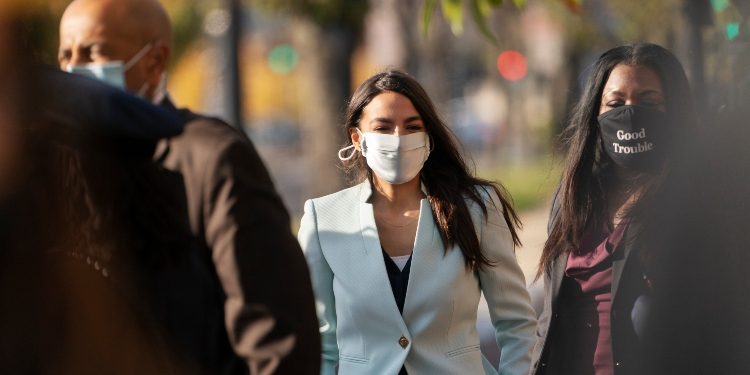