In 2019, after public outcry over anti-Semitic remarks made by Rep. Ilhan Omar, House Speaker Nancy Pelosi refused to mete out any consequences to the Democratic “Squad” member. Instead, she and the House Democratic Conference passed a weak resolution condemning any “hateful expressions of intolerance” and including a laundry list of racial and ethnic groups among those who should be protected. Not surprisingly, Omar saw the resolution as a victory. She issued a statement that said, “It’s the first time we have voted on a resolution condemning anti-Muslim bigotry in our nation’s history.”

If you’re wondering why many of us criticized Pelosi for her cowardice at the time, this week offers more proof: Omar and other Squad members such as Rashida Tlaib, Alexandria Ocasio-Cortez, Ayanna Pressley, and Cori Bush, clearly understood Pelosi’s inaction as giving tacit approval for them continuing to make anti-Semitic statements. And so they have.

As Noah Rothman outlined earlier this week, the Squad was eager to use the most recent Hamas rocket attack on Israel to spread misinformation and lies on social media in an effort to bolster their own progressive credentials at home.

They continued their efforts on Friday on the floor of the House, where Omar called Israeli Prime Minister Benjamin Netanyahu an “ethno-nationalist” and Ayanna Pressley compared Israeli defense forces to the nooses used to terrorize black Americans. Bush linked the United States’ “heavily militarized” police state and its treatment of black Americans to Israel’s treatment of the Palestinians. Bush stated, “The fight for black lives and the fight for Palestinian liberation are interconnected. We oppose our money going to fund militarized policing, occupation, and systems of violent oppression and trauma.We are anti-war. We are anti-occupation. And we are anti-apartheid. Period.”

Omar has also linked the situation in the Middle East to politics at home. She recently equated the following countries’ law enforcement practices: “Minnesota, Columbia, Brazil, Palestine. Police brutality is an international problem.”

This is pure propagandistic posturing in an effort to undermine support for Israel in the United States. It is Hamas, a terrorist organization, that is firing rockets indiscriminately into Israel, targeting civilians. In their public statements, no member of the Squad bothered to mention that the only reason Israel has had to resort to military force is because Hamas has fired more than 2,500 rockets at Israel this week (including many errant rockets that fell short of their targets, killing Palestinian civilians).

The most egregiously anti-Semitic statements this week came from Rashida Tlaib, who initially claimed, “Too many are silent or dismissive as our U.S. tax dollars continue to be used for this kind of inhumanity. I am tired of people functioning from a place of fear rather than doing what’s right because of the bullying by pro-Israel lobbyists. This is apartheid, plain and simple.”

Why aren’t Democratic leaders and mainstream reporters asking Tlaib a simple question: Who is the “they” she is talking about? What, exactly, is it that’s “all interconnected,” as she claims?

Tlaib knows exactly what she’s signaling with such statements—and so do her supporters. She received praise from fellow anti-Semite Linda Sarsour, to whom she responded, on a riff on the favorite Hamas slogan calling for the destruction of Israel and the creation of Palestine, “from the river to the sea” with the following: “From Detroit to Gaza, we will all be free #freePalestine.”

Constant tweeting about international violence is evidently a welcome distraction for Tlaib, perhaps because while she spends her time attacking Israel and Jews, the city she represents—Detroit—remains the most dangerous city in the United States, with a significant increase in homicides and gun violence during the past year. Likewise, in 2019, fellow Squad member Omar’s congressional district in Minnesota was listed as “worst district for black Americans to live,” and has also seen a significant spike in violent crime this past year (it remains the top location for Islamic terrorist recruiting in the U.S. as well).

And yet, the Squad and their anti-Semitic rhetoric can no longer be considered mere outliers; they are, after all, treated as the vanguard of progressivism by the media, still the subject of fawning profiles and praise (the craven Peter Beinart praised Tlaib for the “raw honesty” of her speech on the House floor). In a stunning display of woke ignorance, Daily Show host Trevor Noah suggested Israel shouldn’t defend itself from terrorist rocket attacks because . . . .technology? “Like, set aside motives and intentions and just look at technology, technology alone,” he said. “Israel has one of the most advanced militaries in the world.” Even Teen Vogue agrees with the Squad’s talking points.

The Squad is engaging in what has become all too familiar a tactic on the progressive left—what Dominic Green, writing in the Spectator, called anti-Semitism as a form of “aspirational racism.” Green notes how “the glamorization of ‘resistance’, the overriding of the law, the calls for violence, the conspiracy theories, the obsession with Israel, the willingness to believe any lie about the Jews” are all hallmarks of this approach—and all clearly on display during the past week.

The Squad is also in open rebellion against the policies of the Biden Administration and of many fellow Democrats in Congress, who have been firm in their support of Israel’s right to defend itself from terror attacks (although the Biden Administration is also sending $10 million in aid to unspecified groups “in the West Bank and Gaza” to support “reconciliation” projects with Israel, according to reports yesterday).

The administration might want to spend more time discussing its policies with its own members. As people like Ocasio-Cortez and Tlaib and Omar and Bush invoke the rhetoric of religious war, falsely accusing Israel of “attacking” al-Aqsa during Ramadan and using progressive buzzwords like “colonialism” and “apartheid” to describe the only democracy in the Middle East, they spread lies and misinformation about an American ally. In their incendiary rhetoric and attacks on Israel, they echo the violent and hateful talking points of the terrorists whose stated purpose is the destruction of the Jewish people. Here’s a senior Hamas official on television this week telling Palestinians in Jerusalem to behead Jews: “With your hand, cut their artery from here. A knife costs five shekels. Buy a knife, sharpen it, put it there, and just cut off [their heads]. It costs just five shekels.”

If woke Democrats really believe that words are violence, they might spare a few for a long-overdue condemnation of the members of their own party who continue to spread anti-Semitism. 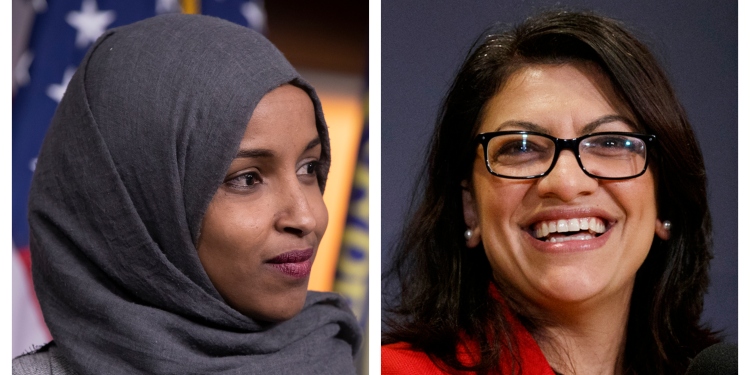